Buccaneers Scheme: How the 4-3 Under gives Gerald McCoy one-on-ones

The 4-3 Under defense is designed to give a player like Gerald McCoy one-on-one pass rush opportunities, but a key injury prevented that from working last season.

Share All sharing options for: Buccaneers Scheme: How the 4-3 Under gives Gerald McCoy one-on-ones

Gerald McCoy is the Tampa Bay Buccaneers' best defensive lineman. That's no surprise: he was drafted third overall for a reason, and after two injury-shortened seasons in 2010 and 2011 he put up a very good Pro Bowl season in 2012. He's a surprisingly stout run defender given that that was seen as a weakness coming out of college to the extent that Mark Dominik even noted in his post-draft press conference at the time that McCoy had to improve his side anchor.

McCoy has to make his mark against the pass, though. That's where he earns his money, and he's been a disruptive presence throughout his career. One complaint so far has been McCoy's relative lack of sacks, which is attributable to a number of different issues. One complaint has been that McCoy has been double teamed too often. There's some truth to that -- so how do the Bucs fix that? How do you get McCoy more one-on-ones?

The Stunt 4-3 and the tilted nose tackle 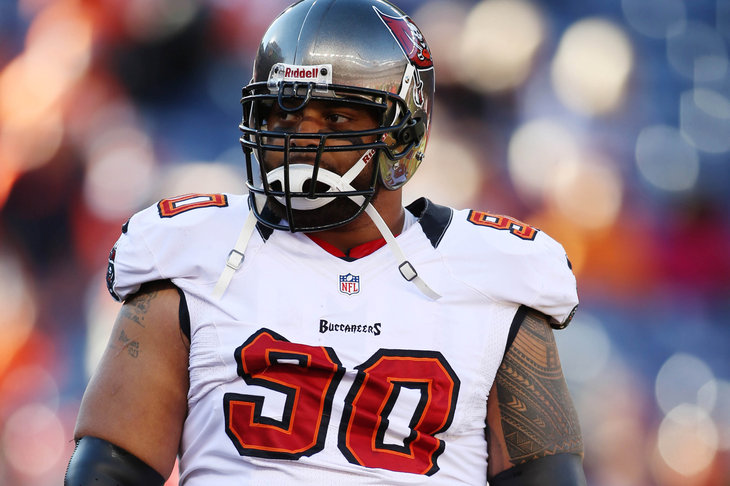 The tilted nose tackle and the Stunt 4-3 are inextricably linked, and a big part of the Buccaneers' defensive scheme.

To understand how the Tampa Bay defense gave Warren Sapp consistent one-on-one opportunities, we first have to understand how the Bucs' defense worked. Duddee had an outstanding article on the 4-3 front the Buccaneers used and still use, and reading that will get you caught up with the basics of techniques and some terminology I'll be using throughout this article.

When Tony Dungy first took over the Tampa Bay Buccaners in 1996, he brought his own defense with him -- what would become known as the Tampa 2, but was based on Bud Carson's old Cover 2 Steelers defense with the Stunt 4-3 as the basis for the front seven. The Bucs lined up in a 4-3 Under defense. What does that mean? Well, it looks like this. 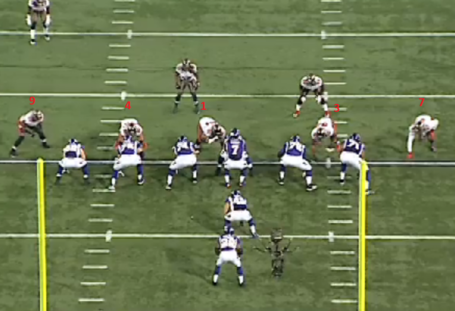 The other defensive tackle the 3 technique player should be your premier interior pass rusher. He is going to get a lot of one on one blocks as it is hard to double team him because of where he lines up.

This should be fairly easy to see in the above picture. The nose tackle will get blocked by the center and usually (but not always) the left guard. But neither of those players is ever going to be able to get to the three-technique to block him. If a double team is coming towards the three-technique, it will always involve the right guard and the right tackle or possibly either of those players and one of the backs in the backfield. With the defensive end aligned outside of the offensive tackle, though, he is almost forced to block that defensive end and can't usually help block the defensive tackle. Effectively by aligning in the 4-3 Under, the Bucs have created a two-on-two situation solely through the design of their defense.

This is exactly what the Buccaneers used to do with Warren Sapp, and this is what it looked like in a 2000 game against the Dallas Cowboys.

Warren Sapp was no unknown at this point. He had been the cornerstone of the league's best defense the year before and was a three-time All-Pro already. He was no slouch, and yet he's getting a one-on-one opportunity. Why? One reason: the Buccaneers align him in a position where the offense essentially has to give him a one-on-one.

Here's another example from the same game, this time on a passing down. I've circled the two tight ends to the left; note the fact that Warren Sapp is aligned away from them. Another thing to notice here: there is no nose tackle. This is a passing down, which means the Bucs can sell out and rush the quarterback, hard. They have no reason to give the center anyone to block -- so they don't. This puts the onus on the linebackers to prevent the quarterback from scrambling up the middle, but usually it just leaves the center standing there, blocking air and looking like an idiot. Good fun!

In his first two seasons, we saw some of this with McCoy, but far too little. In fact, the Bucs at times seemed determined to deprive him of one-ones. They would align him at nose tackle, or play a 4-3 Over where it's easier to double team him, or they would let him play nose tackle in a three-man line, essentially guaranteeing that he would be triple-teamed.

Now, the current defense under Greg Schiano hurts his numbers at times, too, especially so when they run poorly designed and executed stunts and blitzes, but it's much better at putting him in a position to succeed than Raheem Morris' defense was. Like so. 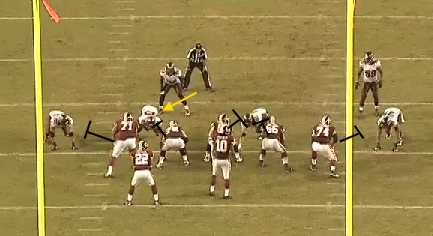 It's the same story as we saw with Warren Sapp, really, although there's no tight end involved here. Align McCoy over the outside shoulder of the guard, put a defensive end next to him to ensure that the offensive tackle can't help block him and there you have your one-on-one block. Defenses will still try to account for McCoy with double teams, but it becomes very hard to do so consistently, and they have to pick their poison. 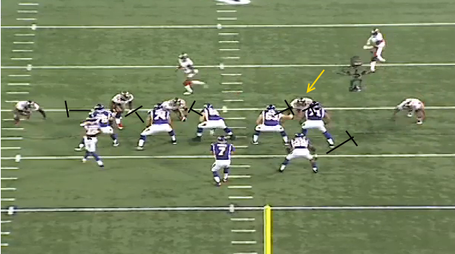 Here's one such case of picking some very strong poison. The Vikings are going with a quick pass and are mostly concerned with stopping quick, interior pressure. That is why they're double teaming Gerald McCoy. That leaves Michael Bennett one-on-one with a running back on the right: a massive mismatch that can only really work because the ball is expected to leave Ponder's hand before Bennett can physically traverse the six or so yards he needs to hit the quarterback. The running back is there merely as a minor roadblock.

Obviously, defenses aren't content to let the Bucs' best pass rusher run wild in their backfield. They want to stop the big man from getting those one-on-one matchups. Through the first three weeks, they had a lot of trouble doing so. In fact, McCoy almost single-handedly destroyed the Panthers in week one. But alas, an injury prevented the Bucs' best-laid plans from fully coming to fruition when Adrian Clayborn was lost for the season to a knee injury.

The issue teams face when McCoy is aligned next to a solid defensive end is simple: they can't leave the defensive end blocked by anyone other than the offensive tackle, which means the guard has to block McCoy one-on-one. The offense can try to help that guard with chip blocks by running backs or motioned tight ends, but that's no replacement for a true double team and McCoy fought through those chip blocks and tight ends surprisingly often. More importantly: doing so means taking another player out of a route, which is a win for the Bucs' defense.

When Adrian Clayborn was lost for the season, teams no longer had to account for a defensive end who was a real pass-rushing threat next to McCoy. Take this play from the game against the Oakland Raiders. 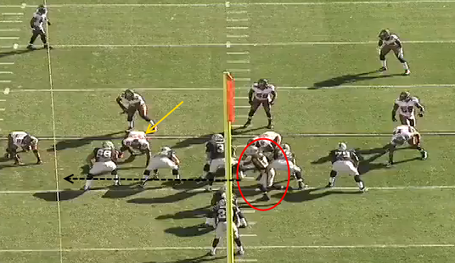 I couldn't get a good screenshot of the original pre-snap alignment, but it shouldn't be too difficult to make out. The tight end circled in red was aligned to the right. Because the Buccaneers align McCoy away from the tight end and Michael Bennett almost always plays on the right side of the offensive line, this means McCoy lines up on the left side of the offensive line on this play -- next to Daniel Te'o-Nesheim, the team's weakest edge rusher.

That's phase one of the Raiders' plan: force McCoy to Te'o-Nesheim's side. Here's phase two: 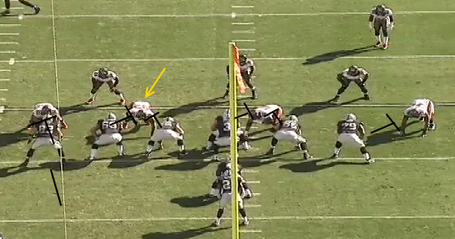 By motioning the tight end across the formation right before the snap, the Buccaneers can't move around their personnel to get McCoy away from the tight end. If they were to do so, Carson Palmer would simply snap the ball before the defensive line could get into position. Instead, the Bucs move into a 4-3 Over defense and are forced to leave McCoy on the side with the tight end, next to Te'o-Nesheim.

And here's phase three: the Raiders use the motioned tight end to block Te'o-Nesheim, allowing their left tackle to help the left guard in blocking McCoy. They double Roy Miller, mostly because of Miller's alignment, and can even use either their fullback or their running back to chip Michael Bennett, who finds himself one-on-one with the right tackle.

The return of Adrian Clayborn

These blocking schemes could only work because the Raiders are confident that their tight end can hold off Daniel Te'o-Nesheim. That's a belief founded in reality: opposing teams blocked Te'o-Nesheim with just a tight end far more often than they should have been able to.

All of this should change with Adrian Clayborn's return from injury. The defensive end notched 7.5 sacks in his rookie season, but played without McCoy for almost all of that year. Meanwhile, McCoy was forced to work without Clayborn last season. 2013 will hopefully mark the first time that the team's two former first round picks get to be on the field together for a full season.

If Clayborn can be disruptive enough to consistently beat tight ends, that will make it a lot harder for opponents to contain the Bucs' pass rush. And if 2011 second-round pick Da'Quan Bowers can live up his considerable physical gifts, the Bucs should be able to force teams to leave two quality pass rushers with one-on-one opportunities on every play.

If Clayborn doesn't return to form or Bowers does not continue to develop, though, we will likely see another season of too many double teams for Gerald McCoy.