Mike Glennon is no threat to Josh Freeman. At least not this preseason.

Share All sharing options for: Josh Freeman will be the Buccaneers' starting quarterback despite Mike Glennon hysteria

This is how rumors start. Yesterday, JoeBucsFan posted a story based quoting Mark Dominik, who said that the Bucs were pleased with Glennon's work in rookie minicamp and give him a lot of reps during the preseason. That's all pretty logical: rookie quarterbacks get lots of reps to learn a system, and the Buccaneers see Glennon as their insurance policy in case Freeman injures himself (or plays extraordinarily poorly), so they want him to be able to execute the offense at a high level. Which means he will get lots of preseason reps. A player seeing more reps during preseason means very little. After all, Brett Ratliff threw more passes than either Josh Freeman or Dan Orlovsky last year.

But then CBS Sports' got a hold of the comments, and turned it into a story stating that they're viginv Glennon "every chance to take away Freeman's starting job." And then they tagged it with this tweet:

Is this the beginning of the end of Josh Freeman as the Bucs starting QB? cbssports.com/nfl/blog/eye-o…

Mike Glennon is insurance for the Bucs 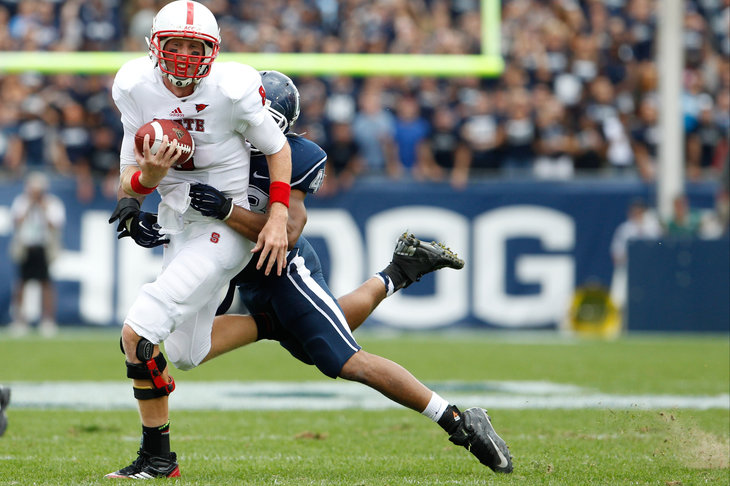 Mike Glennon was drafted to offer insurance in case Freeman gets injured, plays poorly or isn't offered an extension after the 2013 season. Photo credit: US PRESSWIRE

This? This is nonsense. The Buccaneers have stated again and again that Josh Freeman is their starting quarterback and that they believe they can win the Super Bowl with Josh Freeman. Mike Glennon's here to compete alright: with Dan Orlovksy, for the backup job. Josh Freeman is going to be the team's starter when the season opens. The Bucs have made that crystal clear. That doesn't mean Glennon won't see playing time -- if Freeman struggles during the season, Glennon could replace him. But there's no real question that Freeman will be the team's starting quarterback once the season begins.

Josh Freeman's future beyond the 2013 season with the team is less clear, though, but it won't be altered by Mike Glennon. It depends on one thing, and one thing only: how well he plays. Freeman turned the ball over too frequently last year, made too many bad decisions, and simply missed too many open throws. He had a seven-game stretch when he looked like one of the best quarterbacks in the game, but he had two four-interception games towards the end of the season and overall struggled as the year ended.

Freeman will start the season, and will probably finish the season unless his play doesn't improve. But he controls his future with the team, not Mike Glennon. If Freeman produces and improves on last season, he will play a full season and will receive an extension after the season. Greg Schiano isn't Josh Freeman's biggest fan, but he doesn't hate him, either. If the quarterback plays well, the head coach won't complain one bit because the goal is to win games.

If Freeman struggles over a prolonged period you could see Mike Glennon come in. But only if he struggles during the season, and not before.

The Buccaneers love Mike Glennon, who could play this season

Jackson and Nicks among top earning US athletes