2013 NFL Mock Draft: Mel Kiper, Todd McShay and others have D.J. Hayden falling to the end of the first round

A number of mock drafts have one potential target for the Tampa Bay Buccaneers falling to the end of the first round.

Share All sharing options for: 2013 NFL Mock Draft: Mel Kiper, Todd McShay and others have D.J. Hayden falling to the end of the first round

The Tampa Bay Buccaneers may be targeting both Tyler Eifert and cornerback D.J. Hayden, but for that to work those players have to fall to within reach of the Bucs. They need to trade up out of the second round after trading their first-rounder for Darrelle Revis and the Bucs will not want to compromise their draft capital too much. They have seven picks left, two of which are fourth rounders, so they have some ammunition to move up -- but they can't compromise their future too much. They will need the cheap labor that draft picks represent next year.

However, if most recent mock drafts can be believed, Hayden will actually fall to somewhere in the 20s. Dan Kadar's latest mock has him going 29th overall to the Patriots. Matthew Fairburn has him falling out of the first round entirely. Mel Kiper's latest mock has him going 19th overall to the New York Giants. Todd McShay seems him going 24th to the Indianapolis Colts. Even Mike Mayock, who thinks he's the best cornerback in the draft, has him falling to those very same Colts. CBS Sports' Dane Brugler has him going in that same spot, and only Rob Rang sees him as a top 15 pick.

It's entirely possible that some teams have him falling because of his medical issues. He was supposedly cleared and I don't really see how a catastrophic tearing of a vein can be considered a risk for the future, but there have been rumblings that that's a concern. One issue may be his sternum which was broken to access his chest, which scares some teams according to the National Football Post.

I don't get the injury concerns here, but a lot of teams are conservative to a fault when it comes to injury risks. A special talent can be worth the risk, which seems minute in this case. The Bucs have shown a propensity for giving injured players a chance, too, having selected Da'Quan Bowers in the second round in 2011 and Adrian Clayborn in the first. The first was struggling with a knee injury, while Clayborn had some concerns over a weakened right arm due to cerebral palsy. That was a congenital issue that didn't make him an injury risk, but for some idiotic reason that was still what you kept hearing: he's an injury risk. 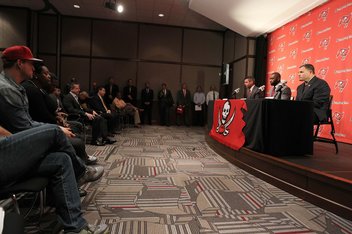 In Hayden's case, the injury risk seems nonexistent. Unless for some reason his sternum is more prone to breaking or the inferior venal cava is more likely to rupture. But that's something the team's medical professionals can determine, and he has by all accounts been cleared to play in the NFL. That would suggest that there is indeed no re-injury risk.

Meanwhile, Tyler Eifert doesn't fall nearly that far. He gets picked by the Pittsburgh Steelers at number 17 in Dan Kadar's mock and in Mel Kiper's mock, while Matthew Fairburn has him going 14th overall to the Carolina Panthers. McShay finally has him going 9th overall to the New York Jets. He's going 13th in Mayock's mock, while neither Rang nor Brugler have him falling out of the top 20. It seems nearly impossible that Eifert would fall to the Buccaneers, but Hayden could easily get within range.

If the rumors are true and it's not just a smokescreen, the Bucs stand no chance of getting Tyler Eifert out of this deal, but D.J. Hayden may become a realistic addition. The cost could be prohibitive, however. The Bucs would likely have to trade up into the 20-23 range to get ahead of the New England Patriots, Atlanta Falcons and Indianapolis Colts. They may have to trade up even higher, because the Bengals who pick 21st overall have frequently been linked with Hayden as well.

If the Bucs want to trade up that far, the St. Louis Rams may be the most likely trade partner. The Rams have two draft picks and may be willing to trade down because of that. In addition, the Buccaneers could throw in Legarrette Blount as part of a potential trade. Blount's trade value isn't high, but Jeff Fisher signed him as an undrafted free agent in 2010 before waiving him and the Rams could use a big running back. The Minnesota Vikings may also be a possibility at no. 23, but it seems less likely they'd want to accept Blount, which would naturally up the price in draft picks.

Still, the cost of moving up that far could be prohibitive. The Bucs would have to move up around 20 spots, and the added cost of moving up just seven spots was a fourth-round pick for the Minnesota Vikings around that spot last season. Twenty spots may cost the Bucs a third-rounder and a fourth-rounder this year, or perhaps even their second-rounder next year. If they can even find a taker at that price.

Rather than chasing the intriguing talent in the first round, the Buccaneers may be better off waiting for slightly worse but still good players to fall to them in the second round.