The last off-season created tremendous hype surrounding the Buccaneer's running game. Fans wondered how powerful an attack the run game would be with the free agent acquisition of Carl Nicks and the drafting of 1st-round running back Doug Martin. The media constantly used the term "road-graders" to describe one the richest interior lines in the NFL. The Bucs would be running "power" all day long, pulling our guards and smashing them into the mouth of the defense; "Schiano" football right? However, the injury bug took its toll with the loss of Davin Joseph in the pre-season and Carl Nicks midway through. The Bucs ended up having only two original starters making it to the end of the season. Still, the Buccaneers ended the season boasting a strong running game a pro-bowl back in Martin. So how did they do it?

The play we hear most about when Tampa's run game is referred to; the "bread and butter". The classic bruising style of running that has been around for as long as any living spectator can remember. The play utilizes man blocking and at least one pulling lineman. 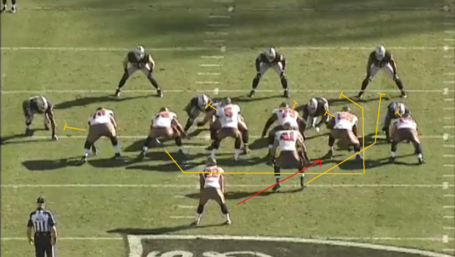 Here against Oakland, the Bucs are in a Strong-I formation. They are running "power" into the strength of the formation. The objective of the play is to pull LG Zuttah across the formation and use the combination of Lorig and Zuttah as lead blockers for Martin. The key is for the lead blockers to get bodies on the linebackers. However, I would argue the most difficult part of this play is the man blocking involved with the stationary lineman. Tight-end Luke Stocker is being asked to solo man block a DE at the point of attack and drive him down the line of scrimmage. 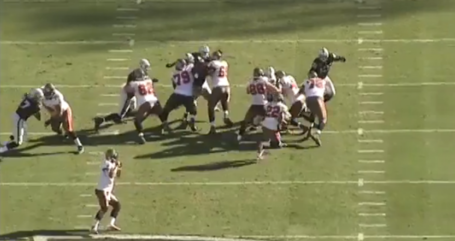 Stocker does a terrific job at driving his man down the line of scrimmage. Lorig finds the outside linebacker and seals him in. 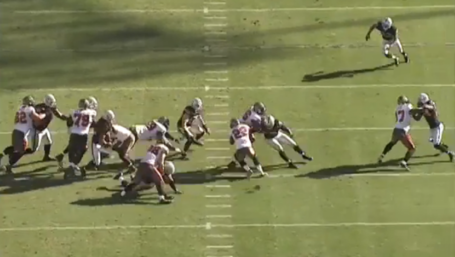 Here, Zuttah is blocking the middle linebacker. However, the MLB knowing that he will get blocked out of play proerly gains outside leverage on Zuttah and forces Martin to cut it inside to an unblocked backside linebacker.

The "power off-tackle" play is similar to "power" with a pulling lineman except that the play is intended to go off the butt of the offensive tackle. 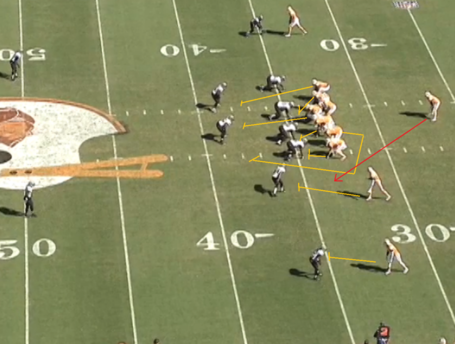 Prior to a play even being called, the field can be analyzed. The Saints are in a cover 2 shell with two high safeties. The numbers in the box are 6 lineman and 6 defenders. If the offense can get a man on a man and block them effectively, the running back will go untouched. This is why it is sometimes referred to as a "smack in the face" to an offensive line when teams are playing with 2 deep safeties. An offense should always be able to achieve positive and nominal yards in these situations.

Once again, the tight end is being able to handle a defensive end one on one. This time, however, the play side tackle is going to pull around to the point of attack which is outside the hash marks. The center and backside tackle are going to immediately get second level and get bodies on as many linebackers and safeties as possible. Notice the backside defensive end goes unblocked. Essentially there are now 6 blockers to block 5 box defenders. 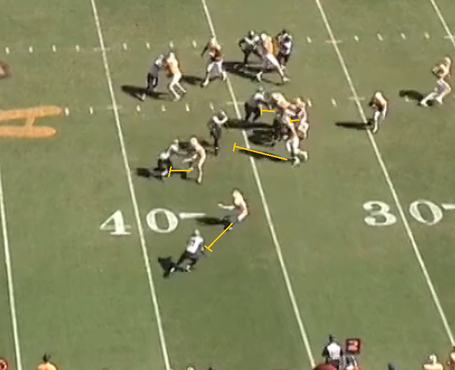 As the play develops, the Bucs get excellent movement from the line. The tight end has sealed the end inside, the center has taken the backside linebacker out of the play, and the pulling Penn is about to demolish the playside linebacker. There is a man on a man all the way across the field which essentially puts the outcome of the play on the player that the offense wants it on; Doug Martin. The play goes for 11 yards.

"Counter" is as it sounds, the counter punch to "power." Its effectiveness comes from when a defense gets too aggressive and attacks what they think is "power", but is left taking false steps as the play goes the opposite direction. 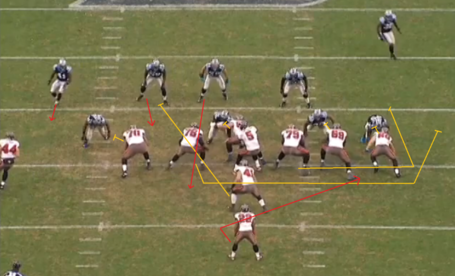 The setting is the week 11 game against the Panthers. Yes, this is in overtime and Dougie is about to close this game out. On the snap, Lorig and Martin will begin taking steps towards the weak side of the formation. Although it is not their key, the linebackers see this movement and attack it. While the linebackers are flowing towards the line of scrimmage, both offensive guards are going to pull opposite the flow of the backs and are looking to get second level and get bodies on linebackers just as in the play "power." 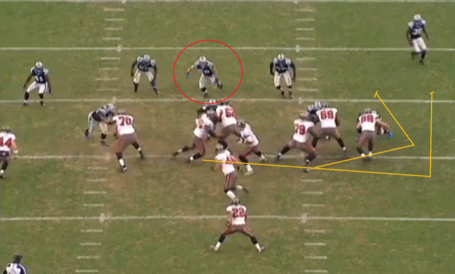 That is the NFL's defensive rookie of the year completely blowing a read and play. 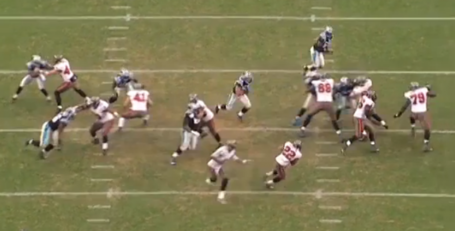 Solid line play with bodies on bodies and good pulls. 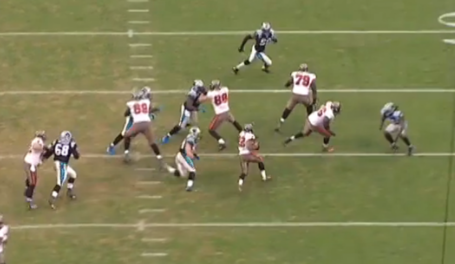 "Inside zone" is the dark-horse in the Bucs offense. They are supposed to be a "power team" right? The volume and effectiveness of the "inside zone" for Tampa is surprising to say the least.

Zone blocked plays are often misconceived and poorly portrayed by the media and game announcers. Lineman aren't assigned areas and told to block them; they are given (and call prior to the snap) clear and precise rules on who they are blocking and how. This is not the same play currently made popular by the Texans. They make their money on the play "outside zone." However, this is the very play that has made Adrian Peterson deadly. 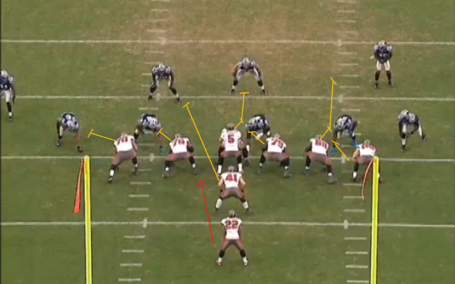 At its simplest form, the "inside zone" is going to temporarily double team interior lineman and then block the linebackers based on their movement. Here, the center and right guard are going to double team the nose tackle. If the middle linebacker attacks the A gap towards the right guard- the guard will release and block him. Conversely, if the linebacker attacks the A gap away from the guard the center will release and block him. Martin is taught to read the first down lineman which is the double team on the nose tackle. If the nose tackle (and combination of middle linebacker) flows hard towards the run, Martin will be given the ability to cut back. However, if the nose stays stationary, Martin will follow his fullback to daylight. 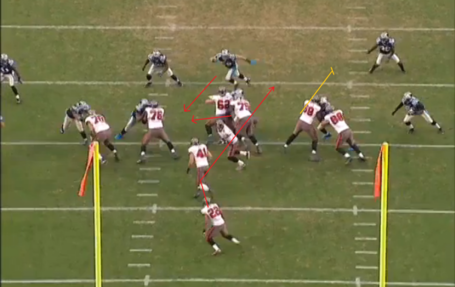 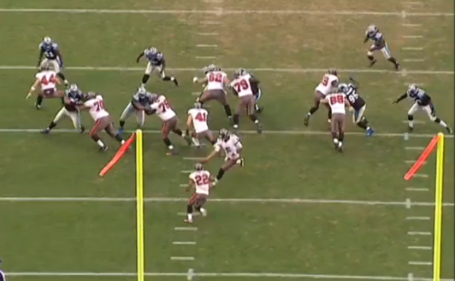 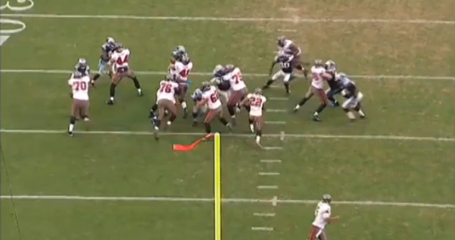 While Dotson whiffs on his block, he gets enough of the defender to keep him off balance and miss the tackle. Otherwise, this was a perfectly executed and blocked play. This was the first play in overtime and results in an 11 yard gain.

Cutups of the play "Toss" and "Naked Toss" can be viewed here.

I watched and charted the running game from five different games: Eagles, Chargers, Rams, Week 7 against the Saints, and Week 11 against the Panthers. I recorded the formation, direction of the run, specific play being run, and outcome. I disregarded specific plays that would otherwise skew the numbers (1st and goal runs where the maximum achieved yardage can be 2 or less and 11 man boxes in the last minute of a game). Note that because most of these numbers are personally recorded (other than yardage gained on each play) they may be slightly flawed. The final tally was 97 plays being ran for 447 yards; an average of 4.608 per run. Comparing that to Martin's season average of 4.6, I am led to believe this is a decent sample to make conclusions on.

First, the numbers behind the direction of the run. It doesn't take a rocket scientist to know that the right side of the offensive line struggled throughout the year. Losing Davin Joseph was a huge blow, but how much did they struggle?

Why did we run the ball so evenly? Obviously a team doesn't want a 99:1 ratio on the direction of their runs, but 51:49? Using 2 yards per play, if the ratio 60:40 was achieved over the 5 games the team would have netted close to 20 extra yards. 20 yards doesn't seem like much, but what if this held true for the entire season? Pro football focus states that the Buccaneers averaged 5.23 yards per play when ran to the left and 3.67 yards when they ran to the right for a difference of 1.56 yards per play. (I am not 100% sure their criteria for direction of run and these are raw numbers that don't discount the goal line and "garbage" runs that I did. However, 1.56 yards per play is a great difference over the course of a season.) So what was the ratio at the end of the season? Still 51:49? While better at 57:43, I would argue that the ratio isn't skewed enough. As a coach I would run that ball the direction that's achieving a great deal of yards more until it began balancing out; say closer to a 1 yard per carry mark.

Next, the numbers on the specific plays being run. I counted a total of 9 different runs over the 5 game span. Of the 9 runs, what counted for the most snaps? Has to be power of course... right? Nope. The inside zone play accounted for a total number of 34 snaps for 35% of the total amount of runs. Power came in second with 21 snaps for 22% of total runs, Power off-tackle with 13 runs for 13% of snaps, Counter with 11 snaps for 11% of runs, toss with 9 snaps for 9% of runs, and draw with 6 snaps for 6% of runs.

These figures make me argue that Schiano's Bucs are not a power running team, or at least this past year with injuries they weren't. It can also be argued that counter and power off-tackle are essentially power runs, but the numbers suggest otherwise.

The direction of the run game seems uncertain for the Buccaneers. Was it injuries to both pro-bowl guards that killed the "power" play? While we can never know, one thing is certain: Doug Martin can run the hell out of the ball from the inside zone. It is almost a given that with the line back to healthy the averages from the power run will go up, but, at the same time, the inside zone averages will also go up. I don't expect the coaching staff to get rid of either, but their percentages will probably fluctuate. I would personally advocate for more zone and cut down on the power.

These numbers leave me with a lot of questions left unexplored. I could go on for another few thousand words doing so, but I'll spare us all the agony. Is that "road-grader" and "smash mouth" persona something that can only be achieved by being one of the few teams still pulling guards and popping linebackers in the mouth? Why did we spend so much money on our guards to still have Doug average 4.6 yards per carry (T-7th in the league for starting RBs) with backups? Is Bob Bostad the best coach on this staff?