Mike Glennon vs Game Film: Week 16 - regression across the board

Whereas most rookies, regardless of where they are drafted, show signs of improvement over their first season, Glennon has regressed in almost every aspect of play. In Week 16, the combination of the same issues he's shown all year together with his most hesitant, indecisive performance yet must lead to serious discussions about his future as a starter.

Share All sharing options for: Mike Glennon vs Game Film: Week 16 - regression across the board

Well, dear readers, I'm back from a fantastic trip to the States, where I got to see my first Bucs home game that wasn't taking place in London, and even managed to get a private tour of One Buc Place, which I'll write about soon. I have to give a huge thanks to Sander and Hockey Duckie for covering the 'vs Game Film' articles for me the past two weeks, but it's time for me to get back to work and look at Mike Glennon's Week 16 performance against the Rams - and boy, did he do a good job of undoing all the de-stressing I had done on holiday.

I won't sugar coat it - it was a horrible performance marred primarily with the least decisive, most hesitant game he's put on tape yet. The issues that have always been there are still there - far too often aiming for the short route when the team needed him to take deeper shots; his complete inability to deal with pressure; even the one aspect that he had begun to show some minor signs of improvement - ball placement - has regressed back to his YAC-killing inaccuracy of old. There was so much to look at, that it was hard to restrict myself to just ten plays to look at in-depth; you'll find three of the more troubling plays below, and the other seven in part two. First though, as always, here's your dropback-by-dropback account of Glennon's performance last Sunday:

As you can see form the chart, there was plenty lacking in Glennon's performance last week. In part two I'll go straight through a bunch of plays from the Rams game, but I've highlighted three plays below that show both new and continuing issues in Glennon's play that should give real concern to everyone.

We'll look at two plays from the Bucs' first possession of the second half. They had just kicked a field goal as time expired in the second quarter, brining the score to 14-10 in the Rams' favour at half time; they followed that up by forcing the Rams to go 3-and-out to start the third quarter. With momentum on their side and driving down to the field all the way to the red zone, the Bucs had an opportunity to retake the lead. Instead, they had to settle for a field goal, leaving the Rams with a one-point lead. It would be the last points they scored all game. 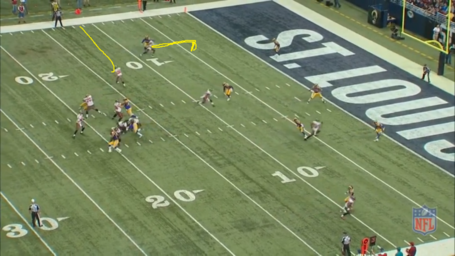 It's a curl-flat combo, one of the most basic (and effective) two-route concepts, with Underwood running the curl and Leonard the flat underneath. 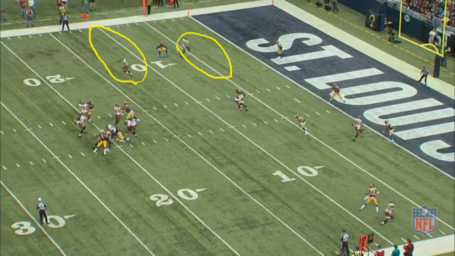 As I've circled above, both Underwood and Leonard have plenty of room to make a catch. Underwood is about to break into the curl, and is just around the first down mark. At this point, Glennon should be starting to throw the ball, whether to Underwood for the first down, or to go 'captain checkdown' and hit Leonard. Wherever he's going to go with the pass, Glennon really needs to be starting to release the ball already. Instead, his throwing arm is still down by his side. 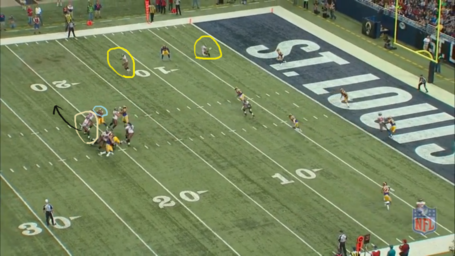 Glennon, circled in beige, only begins to raise his elbow when Underwood starts breaking into his curl, while Leonard has to slow his route down; at this point, the ball should already be in the air, if not in the hands of a receiver. Even though he's taken far too much time, he can still deliver the ball here for a first down - but Quinn, who Penn initially is able to contain, flashes his helmet inside, as I've circled in blue. That causes Glennon to step outside the pocket - which only serves to give Quinn a better angle. Glennon scrambles to the sideline, as marked by the black arrow. 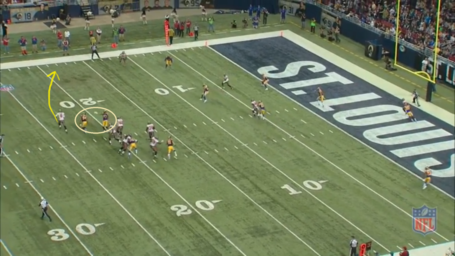 Glennon's decision to run from the pocket results in him being chased down by two free defenders. Glennon throws the ball out of bounds, forcing the team to settle of three points. The thing is, Penn wasn't even particularly beaten on this play - Quinn's helmet flashes inside but he hadn't actually beaten Penn on his inside. If Glennon stays in the pocket to make the throw that he was raising his elbow to make in the previous picture, then the play's likely to end in a completion. More importantly, if Glennon just threw the ball when it was clear there was going to be open field with plenty of room for his receivers to make the catch, it never gets to the stage where the mere sight of an opposing defender's helmet causes him to flee the pocket.

On second-and-nine, the Bucs also dialled up a two-route concept: 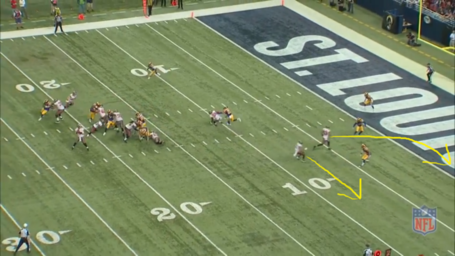 Underwood is running roughly a 5-and-out, while Jackson runs a shallow corner route over the top. Like the curl-flat, it works on a high-low read: if the defender on the five-yard line, Trumaine Johnson, goes to cover Underwood's route, then Jackson is open over the top; if he drops to take away Jackson's route, then Underwood is open underneath.

Still, it's pretty clear here what the responsibilities are, due to Janoris Jenkins - Jenkins is covering Jackson, meaning Johnson is covering Underwood. As soon as Glennon sees this, he should be throwing to the outside of the endzone, allowing Jackson to catch it in stride. 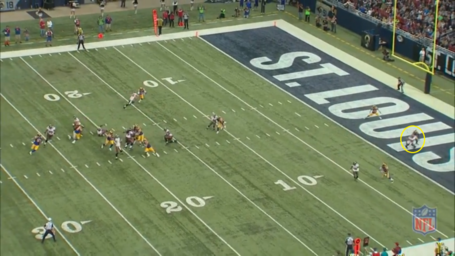 In this photo, Glennon is only just bringing his arm forward to pass the ball. That from the time Glennon could see the defensive coverage in the first photo, to the point of release in the second photo, Jackson has managed to get around eight yards deeper. That's how long it took Glennon to decide to pull the trigger.

I've circled Jackson and Jenkins - there is very little separation between the two. The longer any quarterback waits to throw the ball, the clearer a picture a defender has of what routes he's defending. If Glennon throws the ball after the first picture, Jackson has a big advantage in getting to run his route before the defender knows for sure where the play is going. By hesitating, Glennon lets Jenkins close the gap on Jackson. What's worse, by the time he decides to throw the ball, Jackson actually has to slow almost to a stop in order to prevent running out of bounds. There's simply no room for Jackson to make the catch between Jenkins and the sideline; if this ball is thrown with the anticipation that so many claim of Glennon, yet is very rarely seen on tape, this play's a touchdown. Instead, it's a needlessly incomplete pass.

C) Nothing left to lose

Now to one of my most regular refrains when it comes to breaking down Glennon: his penchant for hitting check downs when there's deep throws available, no matter the circumstance.

Fast-forward to 2:54 left in the fourth quarter. The Rams have just scored a field goal to make it a two-score game; if the Bucs have any chance of winning the game, they need to get down the field and score with as much time left on the clock as possible. 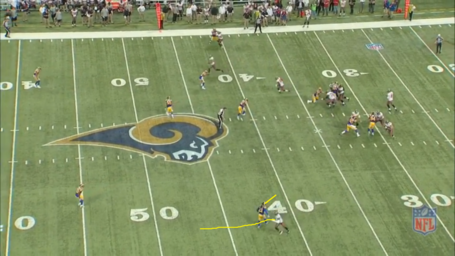 That Buccaneer at the bottom of the picture is Underwood - you know, that speedy WR who runs a 4.4 40 and whose speed Glennon has taken advantage of before. Janoris Jenkins has his back turned to Underwood. There's no question that Underwood would burn Jenkins on this deep streak; all that's required is for Glennon to throw it to him. 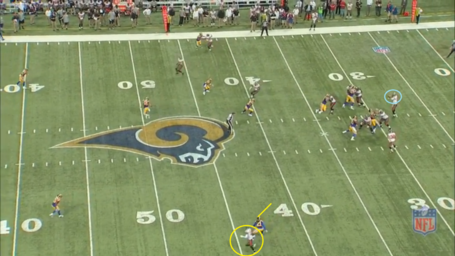 Underwood is now breaking free from Jenkins, and Glennon, looking in the right direction, is winding back to throw - with just two and a half minutes left and the Bucs two scores down, he's got to be going deep with this, right? 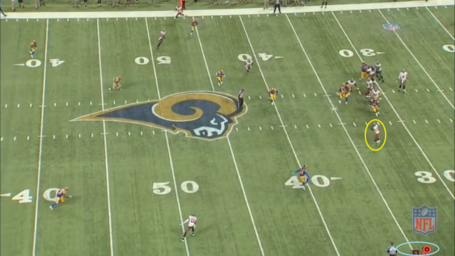 Oh, he's decided to dump off to Leonard instead. Three yards behind the line of scrimmage. With two and a half minutes left and the game on the line.

Here's the problem with Glennon: sure, he's a third round rookie, and so holding him to the standards of an Andrew Luck is patently unfair. But regardless of where a rookie was taken, whether it be a second rounder like Johnthan Banks, fourth rounder like William Gholston, or even an undrafted guy like Tim Wright, it's not so much the level of play that you need to see for the future as the rate of development. Those three rookies have each gotten better over the course of their rookie campaigns, whether it be marginal improvement like Banks, or significant improvement like Wright or, as of late, Gholston.

Glennon has not. Outside of a two-game stretch of improvement - that's two out of twelve games he's started for the Bucs - Glennon has not shown any real development. Even in the one area that lately looked to have improved, ball placement, Glennon's taken a clear step back. Instead of a rate of development, we've instead had to take note of a clear rate of regression in Glennon's play, with the number of wasted opportunities, and the number of needless sacks and pressures, increasing week on week as Glennon becomes more and more indecisive and hesitant.

In part two, I'll go through some more plays from Week 16, but it's very clear that Glennon is in no way ready to take this team to a winning season in 2014 - and frankly, even reaching mediocrity with Glennon under center is looking to be a stretch.