How did Mike Glennon fare against the Buffalo Bills? With Gur unavailable for a week, I'm taking care of the Glennon breakdown this week.

Share All sharing options for: Mike Glennon vs Game Film: Throw the ball!

Mike Glennon put up some terrible statistics last week: 9/25 for 90 yards, two touchdowns, two interceptions and one sack. It surely wasn't a good performance, and he was saved on a couple of mediocre throws by supreme adjustments by Vincent Jackson. Still, after watching the tape it's clear that his outing wasn't as soul-destroyingly awful as it first appeared: a few drops and penalties negated some good throws, while the down and distance often hurt as well as the route combinations.

Still, that doesn't mean it was an excusable performance. Two issues have proven to be consistent for Mike Glennon this season: ball placement, particularly on outside throws, and decisiveness. Glennon has too often been late on throws or simply neglected to take the open throw, even when he was staring right at it. There are instances where I'm watching the All-22 and simply shouting "HE'S OPEN, THROW IT!" as I'm sure a lot of you do in the stadium, too. That's an issue that will have to be resolved if he's to remain the team's starter next year.

On to the tape!

Overall, this was a poor outing for Mike Glennon, although it wasn't as bad on a second watch as it appeared to be live. A few recurring issues are becoming clear for Mike Glennon, though: bad ball placement on sideline routes, and a tendency to hold on to the ball too long. That's part of the reason why Glennon has been sacked so often (7.9%, 27th in the NFL). He's also leaving yards on the field because of it, especially on third down.

Third and long? Bucs have one conversion in last 30 chances when facing third and 8 or longer. (Glennon-to-Jackson 38-yard TD vs. Buffalo)

That's an ugly stat, and some of that was on display this weekend, too. Note these two throws, #6 and #28. Pictures speak louder than many, many words, after all. 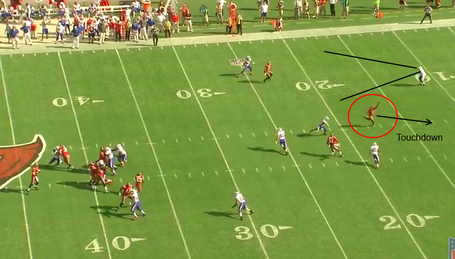 Tiquan Underwood is wide open for the touchdown, running away from his coverage and the lone deep safety. Glennon should have recognized that that would happen as soon as he saw that the Bills only had one safety deep and he was playing just half of the field. In fact, that ball should have been out already at this point. Instead, Glennon's fixated on a very well-covered Vincent Jackson.

That's about as succinctly as I can put it. I don't know what Glennon's coached to do on these plays, but I do know that no coach would ask their quarterback to just hold on to it forever. At some point that ball has to be out. In this latest picture it even looks like he's staring down Jackson, who is wide open because his defender fell down. Instead, he'll hold on to it, scramble to his left a little and then try to flip it to Bobby Rainey, which nearly sees the ball being picked off.

Those issues are not uncommon for rookie quarterbacks: the NFL moves at a different speed and it's not always easy to recognize who's open and who's not while managing a muddy pocket. But it is a skill that all good NFL quarterbacks must develop, and it's been a consistent concern for Mike Glennon this year, especially over the last two games.

Bills vs. Buccaneers Coverage: Can Greg Schiano save his job?