Tampa Bay Buccaneers rookie quarterback Mike Glennon helped the team earn its first win of the season with a win over the Miami Dolphins on Monday Night Football this past November 11, 2013.  His stat line for the game was 11 completions on 21 attempts for 139 yards with one touchdown and one interception.  Mike’s passing yards per game average is 217 yards; two yards less than Cam Newton, four yards more than Alex Smith and Russell Wilson.

Here is an exercise to help compare Mike Glennon with two other quarterbacks in their first year in their offensive system.  Fill in the rest and see how close you are to the actual result at the end of this article.  Try not to do research online when you have read to this point of the article.  (I had this idea for a while, but a nice assist from JC DeLaTorre for adding more information to this exercise.)  All of the stats were gathered from ESPN.com.

The three flingers in the aforementioned chart reveal three quarterbacks who are somewhat similar to one another.  Yet one of those flingers has a tendency to fling it to the other team’s players more often than not.  Is it safe to say that these quarterbacks should lead their respective teams to records that are similar to one another?  Let us look at how the teams have produced.  PF is points for that team, offensive scoring, and PA is points allowed from that team, scoring that the defense has given up.

Now would be a good time to complete your guess chart.

I have mixed the order around in the 2013 Team Production in continuing this exercise.  The offensive difference between the three teams is 7.7 points.  In the first statistical chart (2013 QB’s in a System’s First Year), two players hold eerily similar statistics.  Yet, in the second statistical chart (2013 Team Production), the offensive output we have two players similar in offensive team production, but they are on the lower end.

Then notice the defensive productions of the three teams.  Team Z has a great defense to go along with its offense to create a positive differential.  This would prompt us to believe that the three teams will not have similar records despite whomever is guiding their offensive ship happened to produce similarly.  Have you come up with a couple of quarterback names outside of Mike Glennon of the Bucs as well as what the records might be?

The records are on both ends of the extreme as well as in the middle.  Glennon is putting up numbers similar to Alex Smith of the Chiefs and better numbers than Geno Smith of the Jets while playing fewer games.  This year is Alex Smith’s first year in the Kansas City offense.  Between the Jets’ and Bucs’ offensive production is only three points; the differential between points for and points allowed is 0.1 points.  So why does there exist a huge difference in wins between those two teams?  And then include the Chiefs to that inquiry.  (Besides the coaching, since we Buc fans have been trending that frame of thought for quite a while now.)

I want to look at the defensive side of the ball since the three quarterbacks have somewhat similar productions.  The following chart is broken down in to pass rush and secondary play.

Kansas City’s defense ranks at the top or near the top on most statistical tables.  They are ranked number one in points allowed average, 0.5 better than the Carolina Panthers defense.  The Jets’ secondary is more porous than the Bucs’ secondary, but it is the Bucs’ who are abysmal at getting at the opposing quarterbacks.  The Chiefs have created such a high standard at playing defense that our defense needs to learn how to mimic and implement.  There is one caveat: the Chiefs have played against four back-up quarterbacks for the past five weeks.  (Here's a link to the article that denoted that caveat:  Chief opponents.)  When it comes to back-up quarterbacks, we Buc fans cannot really say that is a proper caveat because Eagles’ back-up gunslinger, Foles, happened to gut us… twice.

A majority of fans continue to clamor for a franchise quarterback in the 2014 draft, but completely neglect on how abysmal our defensive game has been or how pathetic our pass rush is at getting after the quarterback.  If our defense can limit opposing teams to 12 or 13 points per game, then we can get away with 20 points per game offensively.  But if the defense is preventing the opposing team from scoring and creating more turnovers, then the offense has that extra chance to score another field goal or touchdown.  With Glennon at the helm, we have been scoring about 18.6 points per game average for the past six games, his only six games in the NFL.

Warren Sapp may have said that in today’s NFL, you need a franchise quarterback to win.  Does that mean the Kansas City Chiefs are the new trendsetters?  At 9 – 0, it is a trend that may be difficult to dispute.  To add intrigue, this Sunday evening the Chiefs will travel to Denver to face a franchise quarterback.  But for now, their defense reigns supreme. And maybe, that is what the Tampa Bay organization needs to address.

One more thing...  I forgot I sketched this image up for the pre-season game, but didn't post it and thought it would appropriate now.  I hope you like it. 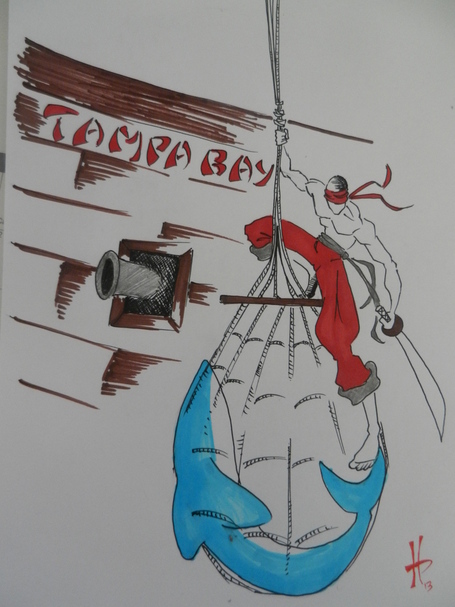