The Tampa Bay Buccaneers are likely going to use their first-round draft pick on a quarterback, but many fans are scared of that idea. Why don't they just pick a player at a different position and select a quarterback at the end of the first round or start of the second?

There's a sense among some fans that picking quarterbacks at the top of the draft is nothing but a crapshoot. That it doesn't matter where you pick a quarterback, there's always a chance that quarterback will succeed or fail. To some extent that's true, but it fails to appreciate a very elementary point: while there's risk in every draft pick, the risk is not independent of draft position. The higher a quarterback is drafted, the larger the chance he succeeds. Quarterbacks that succeed beyond the first round are extraordinarily uncommon, despite the presence of Colin Kaepernick, Tom Brady and Russell Wilson.

The data I used to create the graphs below -- which quarterbacks were successful, and which ones were busts?

The results are pretty strong: the later you draft, the less success you have. That's not because there's something inherent about being picked in the second round that makes someone worse, but because the more teams pass on a quarterback, the more teams think he's not a franchise quarterback -- and while those evaluations aren't perfect, they're still pretty accurate. In this graph, each tranche represents the players picked with the listed draft picks: picks 1-5, picks 6-16 etc. Success in this case is my subjective evaluation as to whether a player turned into a francise quarterback for a team, with some more leniency given to late-round picks (counting David Garrard and Kyle Orton as successes, for instance). 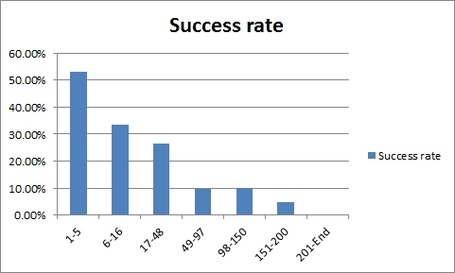 Of course, one can quibble about the groupings I used or my designation of quarterbacks as successes and busts. So what if we just use groups of 25, sorted by the pick used on the players? What if we add an objective measure as well? For that, I removed the players I had marked with a question mark from the data set. Note that in the next two graphs, the horizontal tranches are by player number, not draft pick number. Tranche 1-25 contains all players selected with picks 1 through 17, for instance. 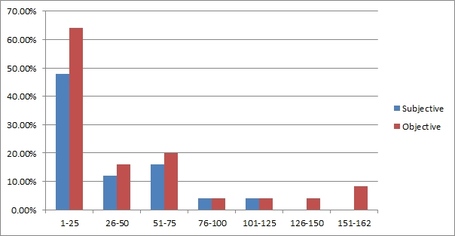 The objective measure I used was Pro Football Reference's Approximate Value per game started, with a minimum of 16 career starts. We can increase the granularity too. What if we use tranches of 15 players? 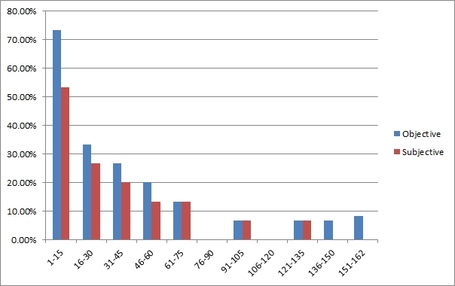 Whichever measure we use, the story's very clear: the farther back in the draft you go, the smaller the chance is of finding a success. It's negligible toward the end of the draft, and even in the late first round it's not very good. If you want a franchise quarterback, you have to draft him high. The more teams pass on a quarterback, the bigger the chance that he won't be that franchise passer you're looking for.

This is also pretty strong evidence that teams do a good job of ranking quarterbacks. They generally have a good idea of which quarterbacks are going to be bad, they just can't eliminate the risk among the top players. The fact that there's an element of chance does not mean that the process is random any more than playing games of chance is random -- you just have to figure out whether the reward is worth the risk.

In the case of quarterbacks, the risk is worth it. Without a quarterback, it's nearly impossible to win big in the NFL -- and the best way to get a good quarterback is to draft one high in the draft, as these numbers clearly show. None of this means that you must pick a quarterback at the top -- but it does mean that planning to take a quarterback beyond the top 16 or so picks is a bad idea. The players left at that point are simply too unlikely to be successful.

Sorry, Clowney-fans. Quarterback success in the second round is too likely to fail.