Vincent Jackson's effort against the Dolphins was fine

Vincent Jackson had an ugly two-play stretch against the Miami Dolphins, but a look at the All-22 clearly shows that looks deceive.

Share All sharing options for: Vincent Jackson's effort against the Dolphins was fine

When receivers drop a few too many passes and then get caught slowing down in a route, fans jump to conclusions. Vincent Jackson has struggled a bit this year, although he's still on pace to put up 1,176 receiving yards. His struggles were emphasized against the Miami Dolphins, when he had a two-play stretch in the third quarter where it looked like he was slowing down and not finishing routes. But that was more an issue of television framing than an issue of Jackson's effort.

On the first play, Jackson does slow down, and here's the moment he does so.

Jackson's double covered at this point, and is not expecting the ball to be thrown his way. In fact, it looks like he thinks the play's over -- and he speeds up again the instant he sees the ball come into his view. And realistically, this ball should not be thrown. This is something you see frequently: receivers slowing down as they think a play is over even when it really isn't. This is especially common when they're running clear-out routes.

This wasn't a case of poor effort on Jackson's part, but either miscommunication or a mistake by Glennon -- and the only reason it looked bad was, really, camera framing. The same's true on the subsequent play -- a bad interception by Glennon. When watching live it looked like Jackson just gave up on the route, and that's why it turned into an interception. Not true: Jackson just couldn't see the ball. 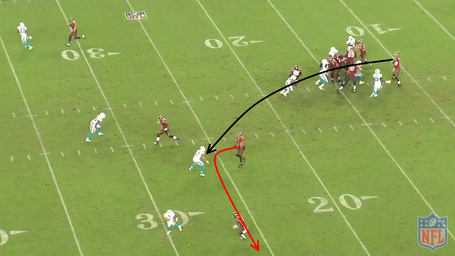 Jackson's not out of his break, and Glennon's forced to make the throw a little early because of pressure in his face. That's not the issue -- but Glennon's accuracy is. He places the ball behind Jackson, and because Jackson isn't even going into his break he's not looking back for the ball and never sees it. This means he can't adjust to the ball -- and has to slow down when he does see it. Of course, the TV angle cut to Jackson as he was slowing down to be able to make a play on the ball, and paired with the previous play it looked like he was dogging it. 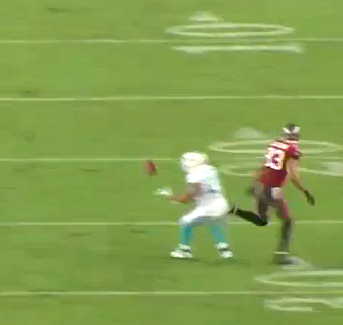 But that's what it actually looked like, with Jackson just coming out of his break. This wasn't Jackson being lazy, it was a badly thrown ball with Jackson not given any time to react to it because of the depth of his route.

Sure, Vincent Jackson has struggled with drops this year. He also looks like he slowed down a little. Both of those things happen to receivers, especially when they're getting older -- and Jackson did pass the dreaded 30-year-old barrier this year, and will be 31 come January.

I don't think you can complain about Jackson's effort, though. Not when he played through a rib injury in Glennon's first start. Not when he likely played with that for a few more weeks. Not when he's still on pace for 1,176 receiving yards on the season despite the team's struggles at quarterback and the increased focus he's seen with Mike Williams' injury. This may be a frustrating season, but effort is not something that's been lacking -- not on Jackson's part.