Mike Glennon is not a quarterback who can put a team on his back - if he was, the Bucs wouldn't be lagging behind the Jaguars right now. He needs to have pieces around him - and he needs to trust those pieces; but watching the game film, I'm not sure he trusts his offensive line.

Share All sharing options for: Mike Glennon doesn't appear to trust his OL

When watching the coaches film from last week's loss to the Seahawks for my pass protection review, something came to my attention, so much so that I felt it deserved a separate article.

That Glennon was scrambling at the first sight of danger was known - I pointed out as much in last week's Mike Glennon vs Game Film. What I wasn't aware of was just how needless a lot of the scrambles were - or how those scrambles unnecessarily cost the team the opportunity of winning the game.

I am now of the opinion that Mike Glennon appears to not trust the Bucs' offensive line to keep him upright, and I present these three plays as evidence why. 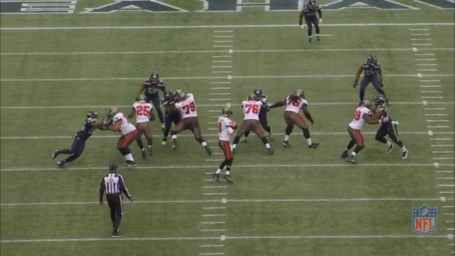 The first play is Glennon's touchdown to Tiquan Underwood. If you read Stephen White's tweets breaking down the Seahawks game (and if you didn't why didn't you? It's a must-read), you'll recognise this play as one where White criticises Glennon for hesitating on this touchdown throw.

To me, it's worse than just hesitation; the reason he didn't throw the pass sooner as because he didn't trust the OL. 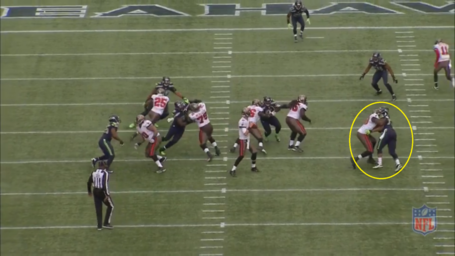 You can see Glennon is already looking at Underwood, on the right side of the screen. It's clear that he's thinking of going to Underwood. Oh, and in that yellow circle, I'm sure that's not Demar Dotson committing a blatant hold; he's just giving his buddy and teammate Michael Bennett a big ol' reunion hug. *cough* 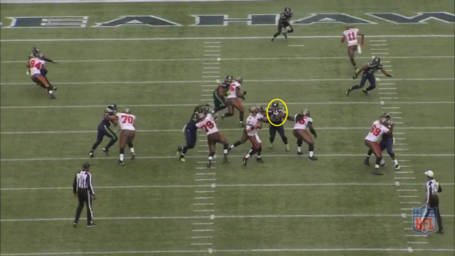 And this is where Glennon appears to get spooked; it looks like Clinton McDonald is about to split Jeremy Zuttah's and Davin Joseph's double team (note Joseph's arm, a technique we looked at in last week's pass pro review). You'll also see Tony McDaniel looks like he's overpowering Jamon Meredith. Between these, Glennon decides to vacate the pocket on a scramble - even though you can see Underwood's about to have a lot of open field on his inside. 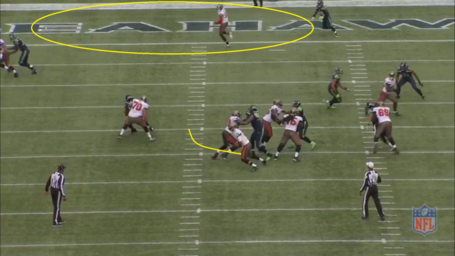 And here's the problem: Zuttah and Joseph were never split by McDonald, and Meredith recovered McDaniel's efforts to seal him to the inside. With Donald Penn blocking Cliff Avril, there's a very clear, protected area of the pocket for Glennon to step up into, as I've illustrated with the yellow line. He just needs to step up in there, set his feet, and then throw to Underwood, who has a huge area of endzone open. 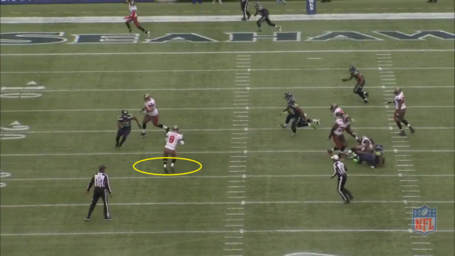 Instead, Glennon waits until he is far away from where Meredith, Zuttah and Joseph where before finally setting his feet to throw. Not only was there absolutely no need, as he would have had plenty of time if he had stepped up to the area highlighted in the previous screen cap, but he's actually given Avril an advantage over Penn by moving outside of the area Penn's trying to protect. Yes, it all ended fine in a touchdown, but instead of having a huge area to throw into (note how far away safety Earl Thomas is), as he would have done if he had stepped up into the pocket... 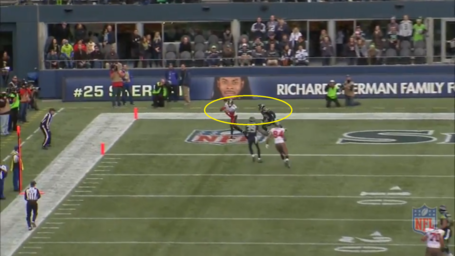 ... Underwood is needlessly close to the sideline. What's worse, Glennon's unnecessary scramble effectively put Underwood in a footrace against the safety with the best closing speed in the entire league - just look how close Thomas has gotten to Underwood, compared to how far apart they were in the previous photo. Glennon had protection and an open receiver; there was no need to scramble in any way whatsoever.

But it ended in a touchdown, so all's well that ends well, right?

The following play is the one which got me so riled up during this week's Glennon vs Game Film - when Glennon scrambled for no reason when Tim Wright was wide open on the opposite side of the field with nothing in front of him. Oh, and for context, the play took place with 44 seconds left in regulation. Yes, if Glennon makes the throw to Wright then the Bucs almost certainly get the win - even if Wright is brought down short of the endzone, he was so wide open, there's no way the team wouldn't have been in field goal range. 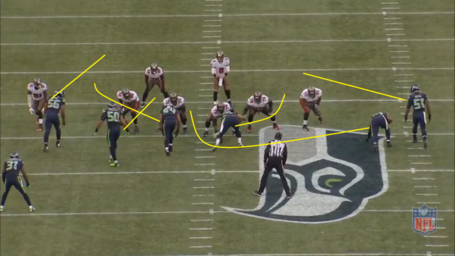 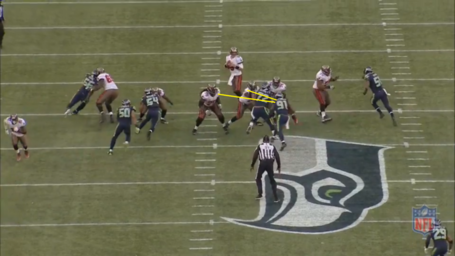 As you can see, the two offensive tackles go to block the edge rushers, Meredith and Zuttah doubleteam Bennett, and Mike James picks up Bobby Wagner. While blocking Bennett, Zuttah has his eyes locked on Clemons, ready to peel off if he needs to pick him up. However, Davin Joseph is doing the same thing. 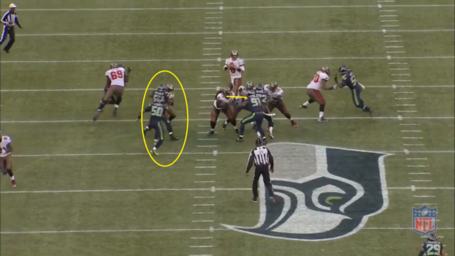 Joseph picks up Clemons, even though Zuttah was clearly ready to peel off and pick him up if needed. By doing so, Joseph leaves James to pick up both Wagner and Wright. Now, it is true that as with anyone not on the Buccaneers roster or coaching staff, I do not know de facto what Joseph's responsibilities are on this play; Mike Sullivan and/or Bob Bostad could indeed have installed a blocking scheme where Joseph did his job.

But in the absence of further knowledge, I'm going to call it what it looks like: a two-time Pro Bowl veteran guard having such a poor awareness of the game that despite having Wagner lined up over him at the snap, he decides to completely ignore what might be happening with the linebackers lined up to his outside in favour of picking up a stunting defensive lineman when the center next to him is perfectly poised to pick him up.

And yet, in many ways, that makes what happens on the rest of the play even worse. 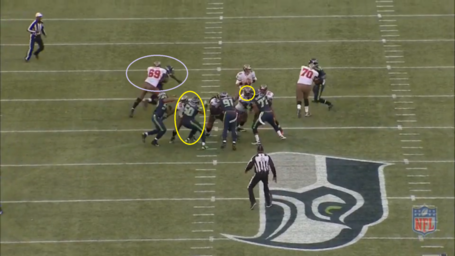 James lets Wagner go in order to pick up Wright, though he still tries to keep a hand on Wagner to slow him down. I've also circled Zuttah's helmet - he is still clearly looking downfield for someone else to block. Again, I can't be sure without having a copy of the Bucs' offensive playbook, but it certainly looks like Joseph should have left Clemons to Zuttah and been the one to pick up Wright, allowing James to continue blocking Wagner. Instead, James is left with two linebackers, while we have three offensive linemen blocking two defenders.

At this point, Tim Wright is open down the field, waiting for a pass that ought to have sealed a win for the Bucs. Avril has gotten the edge on Dotson, but Glennon is looking the other direction. He doesn't know Avril might be coming free. He doesn't know that the apparent mistake by Joseph has left a linebacker coming free. And yet... 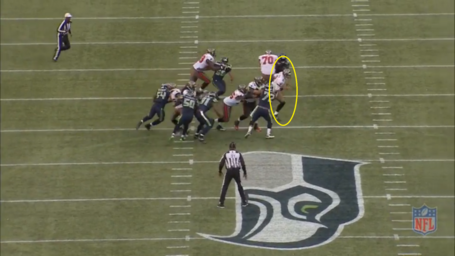 ...with no pressure near him, Glennon decides to scramble, away from Wright. He's tackled three yards short of a first down, fails to make the defense jump offsides on fourth down forcing a delay of game penalty and a punt, and the game moves into overtime.

Yet, if he had just looked around at Wright - even at the point when he scrambled (you can see Dotson regaining leverage over Avril) - he could have made the pass to get his first win in the NFL. There is simply no need for Glennon to be scrambling here.

The nail in the coffin

The Buccaneers win the coin toss, and get the opportunity to put the game away without Russell Wilson getting the ball back in his hands. The first play of overtime was called in as a pass: 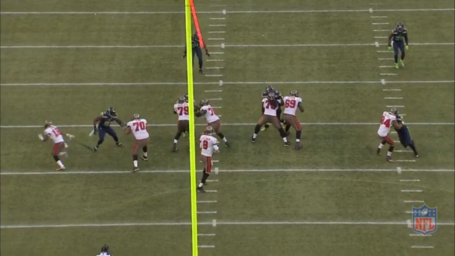 We have what looks like pretty solid protection: Penn is ready to block Clemmons, Meredith and Zuttah have a doubleteam on McDonald (with Zuttah watching for a potential blitz from Wagner), Joseph and Dotson doubleteaming McDaniel (with Dotson watching for a potential blitz from Kam Chancellor), and Tom Crabtree blocking Cliff Avril. The only area which should give Glennon any potential concern is Crabtree blocking Avril. 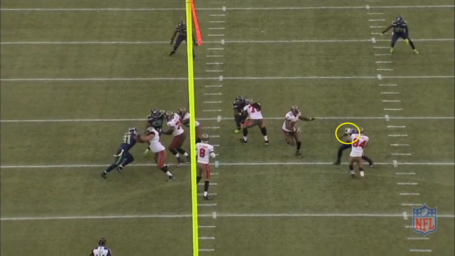 Crabtree does indeed struggle, and has to grasp Avril around the helmet (which technically constitutes a facecage penalty as, believe it or not). Still, Dotson is on the way to help Crabtree out.

Much more importantly: all this has taken place with Glennon looking the other way. He doesn't know there was a momentary potential lapse in protection on the backside of the play. When he finally does look in that direction, he sees this: 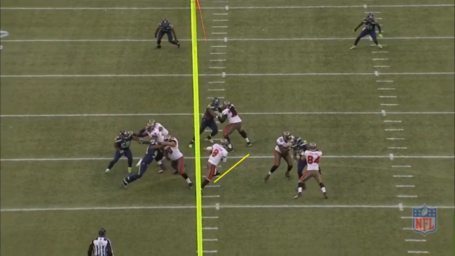 Joseph has got McDaniel tied up and Dotson has sealed out Avril, leaving a nice sized area of field for Glennon to step up into, set his feet and throw the ball, as I've drawn in instead. Notice in particular the big gap between Wagner and Chancellor - that's going to become important in a second. So, what do you reckon - does Glennon set his feet to throw the ball, confident that his offensive linemen will keep him protected? 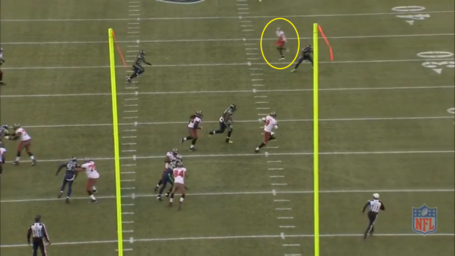 No, of course he doesn't. He decides to take off, scrambling for a grand total of one yard before being pushed out of bounds. The next play, Mike James runs for two yards, before Glennon is sacked on third down, as I broke down in my pass protection review. The Bucs punt, the Seahawks march down the field and Steven Hauschka kicks a field goal. Game over.

Yet, you might notice I've circled Tiquan Underwood in the above photo, just crossing into that huge gap between Wagner and Chancellor I mentioned above. Had Glennon set his feet in that area of field that Joseph and Dotson had given him, there's an open pass for at least a fresh set of downs to be made to Underwood there. But Glennon appears to feel he's not safe in the pocket and runs instead, setting the Bucs up at 2nd & 9 and effectively killing the drive before it could get started

Does Glennon trust the offensive line?

I'm genuinely not sure he does, and while he got away with it on that first touchdown drive, his seeming lack of comfort in the pocket killed the Bucs' chances of winning in the closing minute of regulation and the single Buccaneer possession in overtime.

Would you blame Glennon if he doesn't trust his offensive line, though? Despite what some early Pro Football Focus statistics said about a high level of pass protection efficiency, I've written several highly critical pass protection reviews on the Bucs' OL this season. With that being the case, can you blame Glennon if he doesn't have confidence in his offensive line based on past results?

There are other explanations for his scrambling. An issue I've complained about in almost every Glennon film study I've done is how his feet turned into stone every time there was the slightest bit of pressure in his face. I mentioned in the Week 9 edition of Glennon vs Game Film, though, that he seemed to have replaced that with scrambling, whether warranted or not. It could be, then, that he's actually been coached to scramble - it is, I suppose, a better option than becoming a statue in the pocket when the defense gets heat, and Glennon has definitely improved his vision when it comes to finding pass targets while on the run.

Then again, it could purely be down to the 'phantom pressure' that some quarterbacks feel, especially rookies. Even then, though, feeling phantom pressure still implies that he doesn't fully trust his offensive line.

In any case, Glennon's scrambling - no matter what prompted it - actively hurt the team against the Seahawks, and prevented a potential late victory in the game. And that's simply another argument against Glennon remaining the Bucs' starter beyond this season.

So, what do you think - does Glennon trust the offensive line?