The NFL is going to see a slew of head coaches next season and the Tampa Bay Buccaneers won't be the only ones hiring. Who are the main candidates for NFL jobs at this point in the year?

The Tampa Bay Buccaneers are probably going to be looking for a new head coach next year. Not certainly, as Greg Schiano and Mark Dominik think six wins will save their jobs, but probably, given the fact that they've lost the fan base. Plenty of fans are already looking forward to the draft and possible new head coaches.

It's not just Bucs fans, though. Both Dan Pompei and Albert Breer put out lists of possible NFL head coaches next season. The lists include all sorts: college head coaches, former NFL head coaches and current NFL assistants. Contrary to public belief, college coaches aren't more likely to fail than other coaches and defensive coordinators actually tend to do worst, though the overall difference isn't all that large.

Sumlin is probably the hottest name in college sports right now. Blew up the SEC last year with Johnny Manziel as his quarterback but had a terrific squad the past two years. Went 11-2 in 2012 withthe only two losses coming against Florida in the season opener and LSU at midseason. Beat #1 and ultimate national champion Alabama in their own stadium. Is 4-1 so far this season with the only loss coming to, again, Alabama.

Prior to Texas A&M he compiled a 35-17 record as the head coach of the Houston Cougars, including a 12-1 record in his final season. His background is on the offensive side of the football and he was the co-offensive coordinator of the Oklahoma Sooners in 2006 and 2007 when they tore up the league. Sumlin has a terrific reputation, and was reportedly on the radar of several NFL teams this year but opted to stay in college. It may be difficult to get him to jump to the NFL. One potential problem: he has no NFL experience. 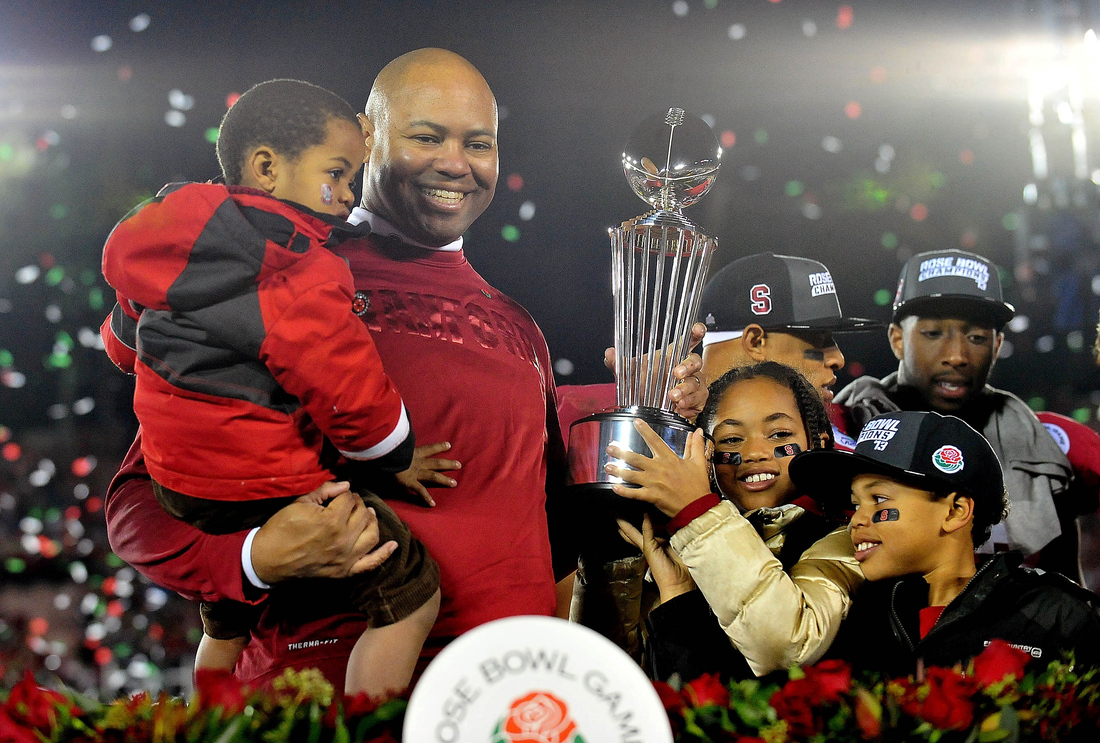 Has a stellar 27-4 record with Stanford since taking over for Jim Harbaugh in 2011, and only had Andrew Luck for one of those years. Won the Rose Bowl last year and lost the Fiesta Bowl the year before. Has a great reputation and is an engaging speaker, if we can judge that by his Ted Talk. Has extensive NFL experience and was Rich Gannon's quarterbacks coach in 2001 before spending 2002-2005 with the Baltimore Ravens as a quarterbacks coach and wide receivers coach.

Shaw joined Jim Harbaugh at the University of San Diego, where he coached Josh Johnson to one ridiculous season. Followed Harbaugh to Stanford where he become the offensive coordinator and coached both receivers and running backs. Shaw signed a new long-term contract at the end of 2012 to head off any interest from NFL teams, and loves Stanford. It may be hard to lure him away from the success he's having with Stanford. Would be my number one choice for a head coach, closely followed by Kevin Sumlin.

Has an unimposing 54-39 record at Northwestern and has spent the past 13 seasons with Northwestern in one form or another. Has a defensive background and a 1-4 record in bowl games. He's 4-0 so far this season, so that's a positive at least. No NFL experience and it's not clear why he'd be a good candidate for an NFL position, but his name is out there.

Has compiled a 30-25 record at Washington over the past five years, including bowl appearances in his past three seasons with one win. Washington was awful before he got there so that's an accomplishment, but it's not a ringing endorsement. He's 4-0 so far this season and has managed to produce some NFL talent, including Bucs linebacker Mason Foster and Titans quarterback Jake Locker. Has one year of NFL experience as the quarterbacks coach for the 2004 Oakland Raiders and coached under Pete Carroll as variously a quarterbacks coach and offensive coordinator. Seems to be seen as an up-and-comer, but has been seen that way for several years now. 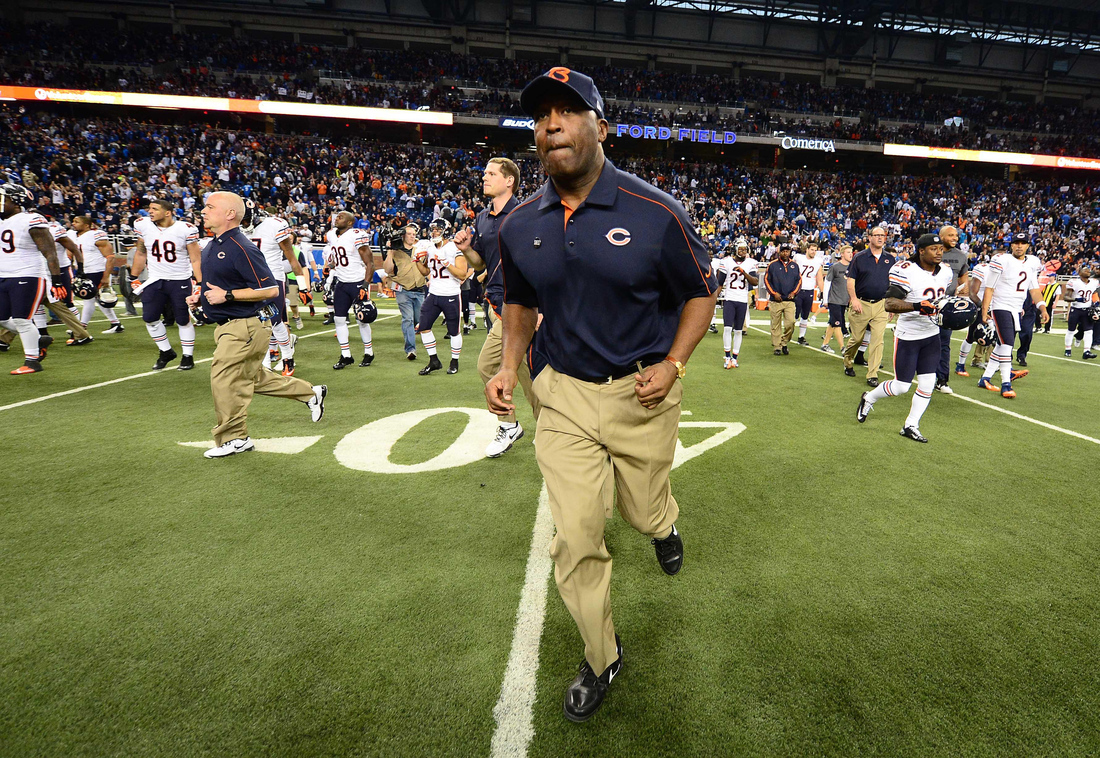 One of the many coaches to leave Tampa in the early 2000s when the Tampa 2 defense spread across the league. Was the team's linebackers coach from 1996 to 2000, and helped Derrick Brooks reach his potential. Was the Rams' defensive coordinator from 2001-2003 before being hired as the Chicago Bears' head coach in 2004.

Won three division titles in nine years with the Chicago Bears, has a 3-3 playoff record and made a Super Bowl appearance. He had five winning seasons in Chicago, leaving with an overall record of 81-63. The Bears consistently put up good defense and had outstanding special teams, but Smith could not find a competent offensive coordinator. He takes after his mentor Tony Dungy that way. Even when the team traded for Jay Cutler their struggles continued, which proved his eventual undoing. Could be a great candidate, provided someone teaches him what a good offensive coordinator looks like.

Made his name in the NFL as a tight ends coach, but was the offensive coordinator for Ben Roethlisberger in his first three seasons (which includes the Steelers' first Super Bowl appearance), while also helping resuscitate Kurt Warner's career and now Philip Rivers' career with the San Diego Chargers.

Was the Arizona Cardinals' head coach from 2007 through 2012, where he compiled a 45-51 record, won two division titles, made it to a Super Bowl and managed a 4-2 playoff record. The fact that he couldn't figure out what a good quarterback looks like if one smashed head first into his face crippled him in his final three seasons. Thought Derek Anderson, John Skelton, Max Hall, Richard Bartel, Kevin Kolb, Ryan Lindley and Brian Hoyer looked like pretty good quarterbacks. They all failed miserably. 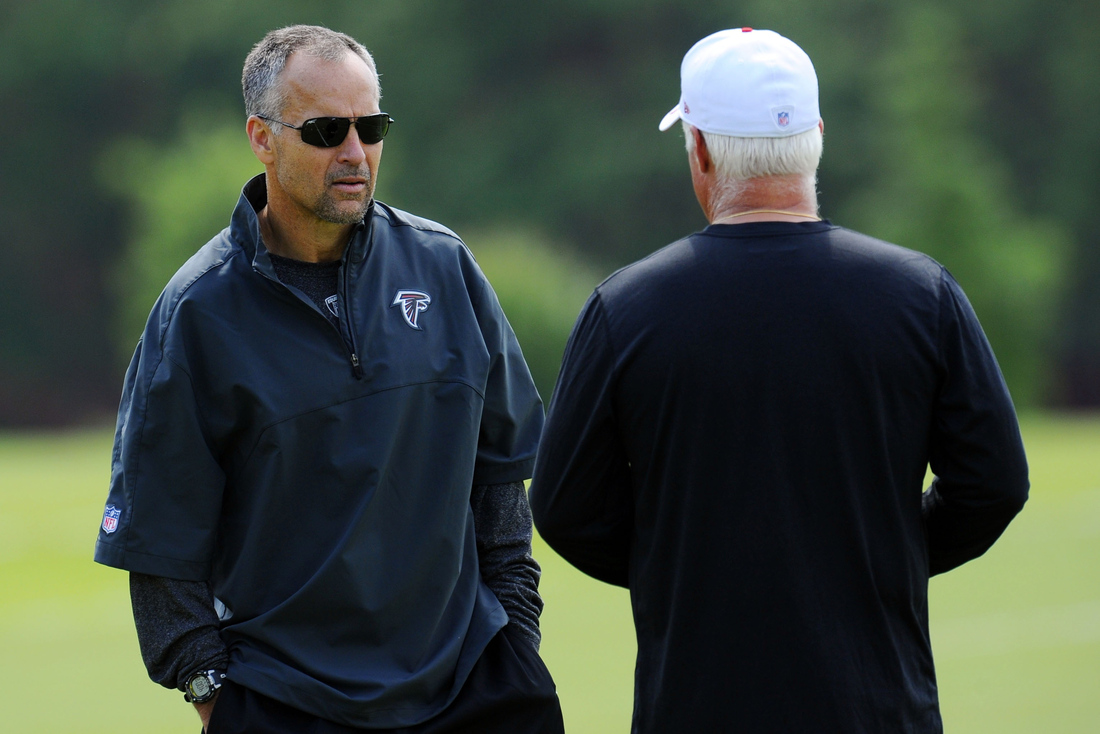 Master of 4-3/3-4 hybrid schemes and a supreme defensive coordinator, Nolan's history as a head coach is a lot less impressive. Selected Alex Smith with his first pick because the quarterback had a "distaste for confrontation" and Nolan detected "attitude" from Aaron Rodgers. Oops. (source)

Went 18-37 in four years with the 49ers, never getting to the postseason. Had a reputation as a hard-ass, but couldn't get anything done on the field. Will turn your defense into a great unit almost regardless of talent, but has he fixed the problems that led to his firing in San Francisco?

Has done a good job with the Broncos defense the past two years, although he has a lot of talent to work with as well. Had one previous season as a defensive coordinator with the Carolina Panthers in 2002 where he was outstanding as well, and was a Ravens linebackers coach before that. He's a good position coach and a good defensive coordinator and was a very good NFL linebacker from 1985 to 1996.

Unfortunately, he was awful as a head coach with the Jacksonville Jaguars. Had three winning seasons in nine years, went 68-71 overall, never won his division (to be fair, he was in the Peyton Manning-dominated AFC South), and won just one playoff game. Mediocrity was the Jaguars' middle name with Del Rio at the helm.

Innovative offensive mind who thinks he could mold a paraplegic into a functional NFL quarterback if only said paraplegic was a great leader. Ran the Broncos into the ground after being hired in 2009, taking full control of personnel, which included some horribly wasted drafts. His first- and second-round picks: Knowshon Moreno, Robert Ayers, Alphonso Smith, Darcel McBath, Richard Quinn, Demaryius Thomas, Tim Tebow, Zane Beadles. Oh, and he managed to trade away the pick that became Earl Thomas, All-Pro safety. Oh, and he managed to somehow create a minor videotaping scandal.

Still, coached Tom Brady to his best season in 2007 and got some stellar production out of the Patriots offense last year, although it appears to be faltering without weapons this year and he couldn't get anything out of the St. Louis Rams in 2011. If anyone were to hire him, which seems unlikely at this point, they'd certainly do well to strip of him of any personnel power. Also, don't let him near videotaping equipment. 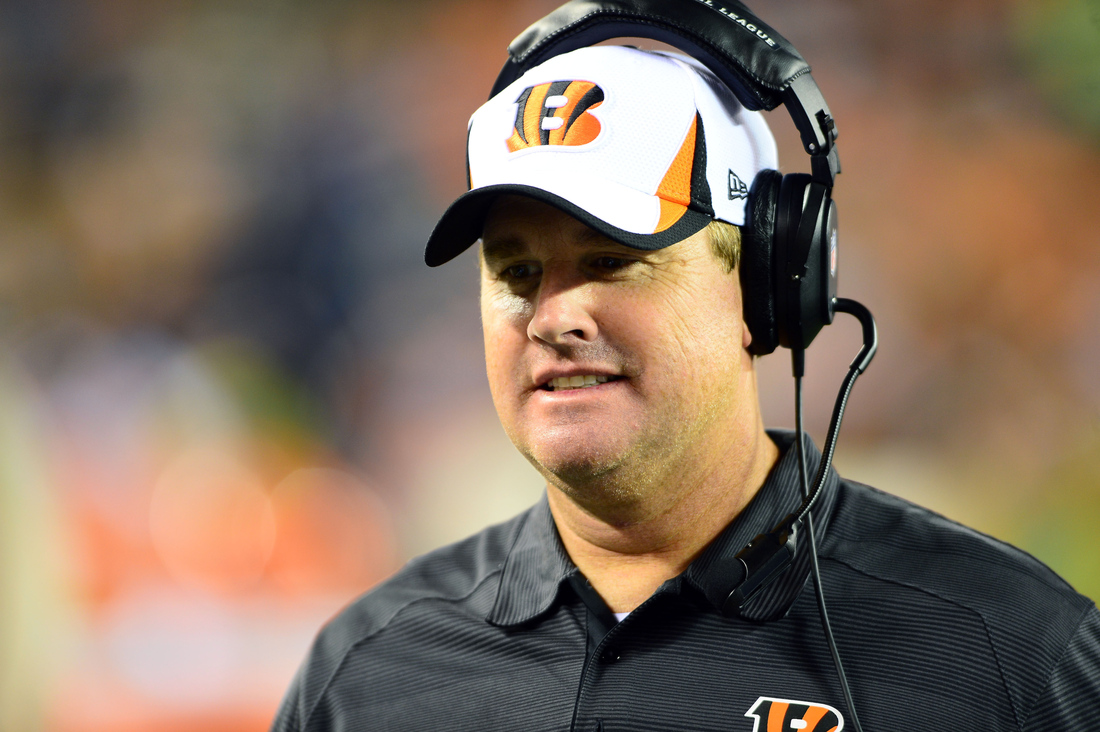 Jon Gruden's younger brother, Jay used to be the god of Arena League football. Has won 6 ArenaBowls and was voted the league's fourth-greatest player of all time in 2012. Was a Bucs offensive assistant from 2002 through 2008, but spent most of this team as a head coach and (early on) quarterback of the Arena League Orlando Predators. Spent two years in the UFL before joining the Bengals as an offensive coordinator in 2011.

Gruden has led the Bengals offense for the past three years with mixed success. Andy Dalton has been an okay quarterback, while the team's running game has been up-and-down. Effectively, the Bengals offense feels much like Jon Gruden's offenses in Tampa. Jay turned down head coaching opportunities in 2012 but interviewed for several openings this year. Feels like the mellower version of his older brother, but given the way the Bucs parted ways with Jon Gruden, there doesn't seem to be much of a chance that Jay ends up in Tampa.

Quite possibly the most innovative offensive coordinator in the game right now, despite the smash-mouth appearance of his offense. Very original with his run block concepts, consistently manages to fool opposing defenses and turned Alex Smith into a functional NFL quarterback while grooming Colin Kaepernick. Does a very good job of creating open receivers and easy throws for his quarterbacks.

Was Stanford's offensive coordinator before coming to the NFL, where he coached Andrew Luck in his first two seasons in college. Spent the early part of his career with the Carolina Panthers, working on both the defensive and offensive side of the ball. Joined the Texans in 2002 and became their tight ends coach and later quarterbacks coach, before spending two years with the Ravens as an offensive line coach.

Has a long history as an offensive coach in various West Coast offenses. Coached Brett Favre from 2003 to 2005 with the Packers before moving to the Vikings as their offensive coordinator. Reunited with Favre there in 2009 and 2010, and became the Seahawks' offensive coordinator in 2011. Has an up-and-down record as a coordinator with a lot of bad (Tarvaris Jackson, Charlie Whitehurst) mixed in with some really good (Brett Favre, Russell Wilson). 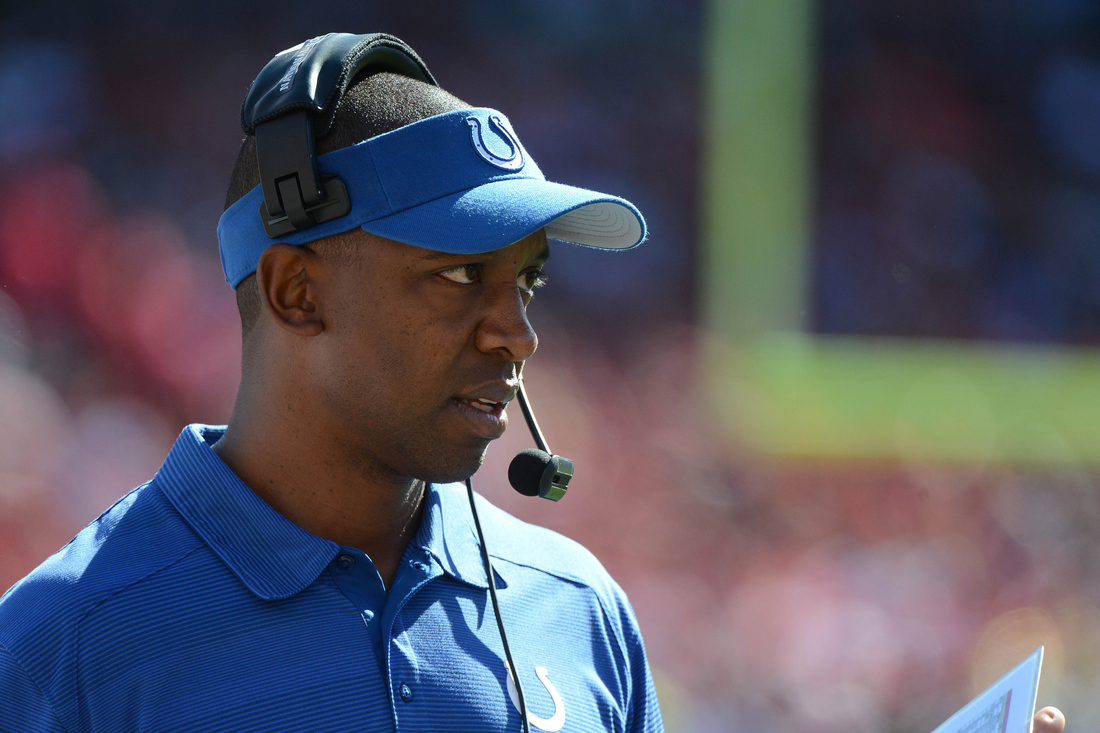 Another one from the Stanford coaching tree, Hamilton spent 2010-2012 with the Stanford Cardinal as a receivers coach, quarterbacks coach and offensive coordinator. Has extensive NFL experience holding positions all over the offense with the New York Jets, San Francisco 49ers and Chicago Bears from 2003 through 2009.

Currently, he's the offensive coordinator of the Indianapolis Colts, where he's leading a run-heavy offense similar in its innovations on offense to what Greg Roman has done in San Francisco.

Currently leading the league's best offense and coaching Peyton Manning to what is probably going to be his best year, ever. Quite an accomplishment, although he certainly has the weapons to put up some great production. Was Denver's quarterbacks coach the year before. At just 34, he's the youngest name on this list. Was part of the offensive staff that coached Tim Tebow to not completely destroying his team's chances in 2011. Served as the team's wide receivers coach in 2009 and 2010, after spending time on the offensive side of the ball with the 49ers and Detroit Lions in previous years.

Terrific defensive coordinator who has turned moderately talented groups into pretty good units with the Jacksonville Jaguars and Cleveland Browns. Was the Jaguars' interim head coach in 2011 and went 2-3 with a squad that was 5-11 on the season. Of course, those two wins came against the ten-game losing streak Bucs and the 2-14 Indianapolis Colts.