In part one, we looked at a few plays that were typically representative of the majority of passes the Bucs called last Sunday - now we look at some of the best and worst of last week's pass protection.

You saw in part one what the pass protection would typically look like last Sunday; sloppy, but not so bad as to put a serious kibosh on the passing game - though more thanks to Sullivan finally showing some scheme flexibility than to the Bucs' OL.

We begin with a sack.

I mentioned in the first part that Joseph failed to be sucked in by a DL going outside, instead keeping himself in position to pick up a looping linebacker. Unfortunately, that has been more the exception than the norm this season; what happens far more often is what we see below. 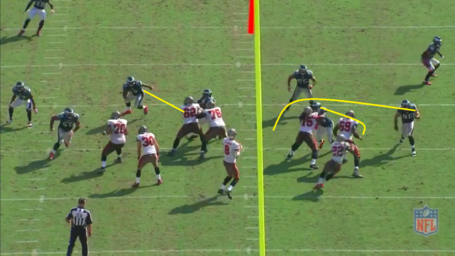 It's third and nine in the fourth quarter, the Eagles are eight points ahead but there's enough time left on the clock to turn the game around - as long as they can keep the drive going. Penn and Leonard are tracking one edge rusher, while Dotson is positioning himself to take the other. Joseph is locked up on one defensive tackle while Larsen and Zuttah are double teaming the other, though Larsen is watching the blitzing linebacker. 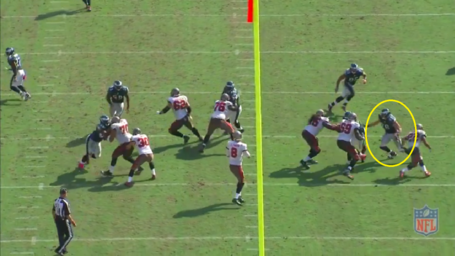 As Larsen peels off on one side of the pocket, on the other, Connor Barwin is beginning to loop back inside. 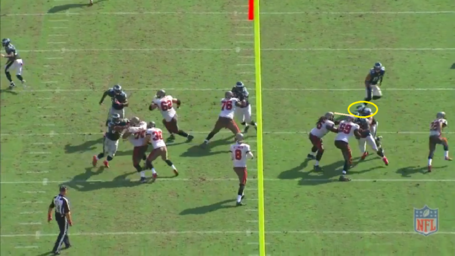 This is the point where you want Joseph to disengage, as the defensive tackle is now in Dotson's grasp. Unfortunately, as you can see by the beige line, Joseph is still focusing squarely on the DT. 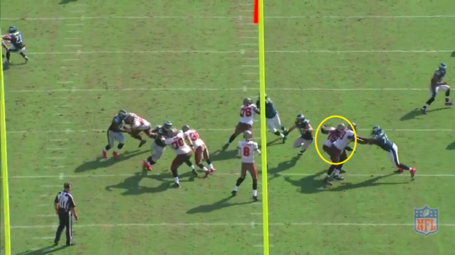 By the time Joseph reacts, it's far too late. There's no chance he can get to Barwin. 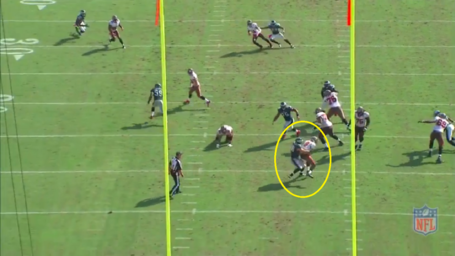 And that ends as well for Glennon as you'd expect. A loss of eleven on the sack forces the Bucs to punt, giving the Eagles the ball back with enough time to spend almost an entire drive in an unbalanced line, chewing clock and sealing the game.

The road to hell is paved with good intentions, as the old saying goes - and there's no doubt the intentions here were good: throwing the ball away to try and save the yardage for third down. Unfortunately, those good intentions led to intentional grounding - but why did Glennon feel the need to throw the ball away? 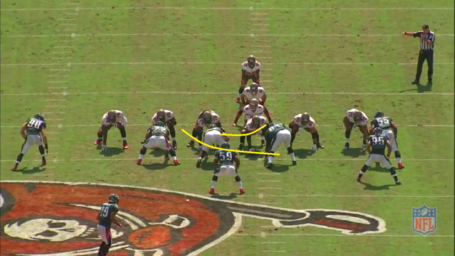 The call is play-action on 2nd & 4 - a reasonable call in the circumstances. Jamon Meredith is lined up as a tackle outside Dotson, while we have standard I-form in the backfield. We have a tackle cross on the Eagles defense, with Brandon Graham (#55) and Mychal Kendricks (#95) swapping B and C gaps on the weakside of the formation (not drawn in). 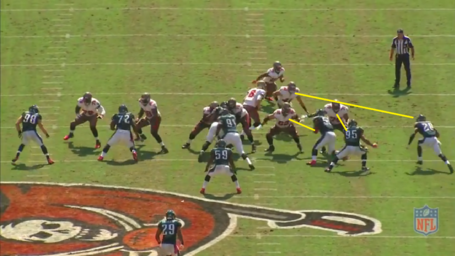 Though Larsen steps towards his A-gap, he's looks back and sees Graham shooting the B-gap, while Penn watches Kendricks move outside him. Meanwhile, safety Earl Wolff has come down into the box, and is being eyed by Lorig. 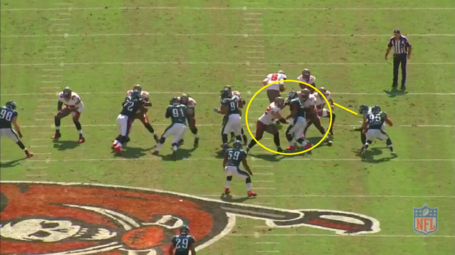 Penn moves swiftly back to pick up Graham, as does Larsen. Joseph and Zuttah have picked up Cox's and Sopoaga's stunt, and Lorig is all set to block Wolff. 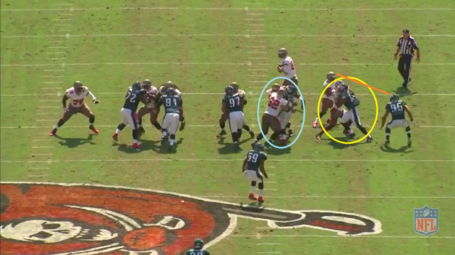 Here is an example of something I referred to in the first part of the review - Larsen's tendency towards over-aggression. As with Zuttah on the touchdown pass we saw in the first part, Larsen's hit on Graham doesn't secure him, but merely knocks him away from Penn's block, setting him free. Lorig has engaged Wolff, while Martin is heading to block Kendricks. 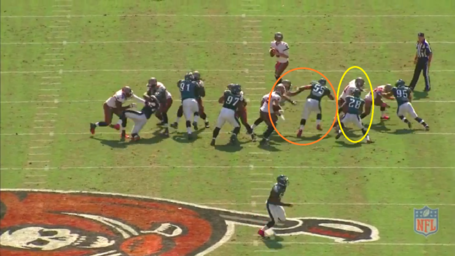 You can see in the orange circle how Larsen actually managed to spring Graham free; meanwhile Lorig has let Wolff go in order to help Martin with Kendricks. Note also how Joseph is stepping outside of Cox - giving away his inside. 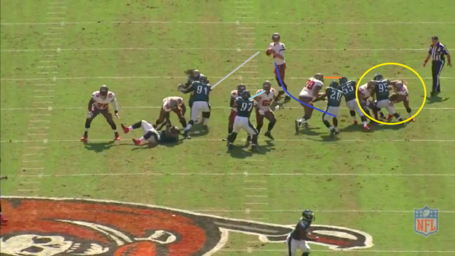 Penn chases down Graham, while Lorig and Martin take on Kendricks between them. Larsen, meanwhile, looks back to double with Zuttah on Sopoaga - leaving Wolff with a path to the quarterback, as indicated with the dark blue line. Cox likewise has a relatively clear path the the quarterback, as indicated with the light blue line. 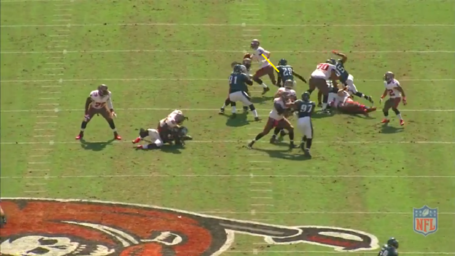 As you can see, Wolff is free to chase Glennon, eventually forcing the QB to throw the ball out of bounds but, being inside the pocket and with no receiver in the area, is flagged for intentional grounding. Joseph has done a good job of getting back to block Cox, but the defender is able to push Joseph away and starts to pursue Glennon too, though the ball is gone before he gets there.

BUT IT WASN'T ALL BAD!

Those who follow me on Twitter (shameless plug: follow me on Twitter) know that I often decry the lack of zonal concepts in our pass protection scheme, especially with our offensive line's tendency to bite on stunts as in the first play broken down above. (Sidenote: I wonder if the reason Schiano and Sheridan keep dialling up stunts is because how often our OL bite on them? I mean, it's gotta look like it's having a huge success rate in practice based on how our OL almost always get sucked up into stunts during games, so maybe that's part of the reason behind all the stunting? Hmmm...)

Well, I don't know if Bob Bostad is one of my followers, but thank the heavens - WE USED A ZONAL CONCEPT! For those who don't know much about offensive line play, allow me to introduce you to the half-slide protection: 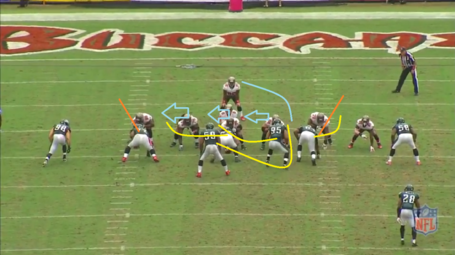 Half-slide is a hybrid protection scheme, where the tackles are playing according to big-on-big concepts - or basically, taking the edge rushers. The interior OL, however, are playing a zonal scheme, where each of the offensive linemen have a specific zone to block - or more generally, a specific gap to protect. In this instance, the zones are pointed out by the arrows - Joseph has the weakside B-gap, Zuttah the weakside A, and Larsen the strongside A. The gap left unprotected - the strongside B - is the responsibility of the running back, in this case Martin. If the whole line were playing big-on-big, you'd expect Joseph and Zuttah to double team Sopoaga, who's lined up at 1-tech, and Larsen and Penn to double team on Cox, who's lined up at 4i-tech; instead, you'll see how they slide to cover their zones. It's the perfect scheme in this situation too, as the the DL will be looping - Sopoaga to weakside B, Kendricks to weakside A, and Ryans to strongside B. 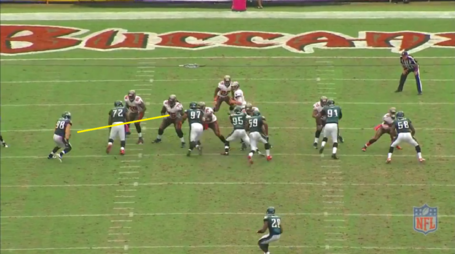 Here you see the interior OL have slide over to the weakside of the formation, with the defensive starting their looping, and Joseph checking Barwin (who drops into the middle zone). 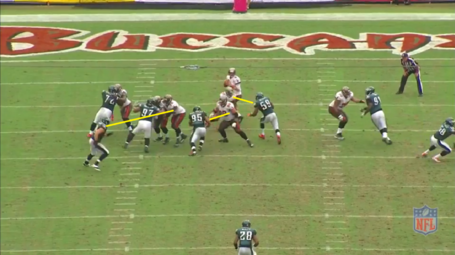 Sopoaga crosses Joseph's face, entering Joseph's zone and becoming his responsibility - this frees Zuttah up to check Barwin, as it's not yet clear he's dropping into zone. Though Kendricks has shot across to where weakside 'A' was, the shifting of the OL lines him up in Larsen's zone. Martin, meanwhile, prepares to take on the man through his gap - Ryans coming through the playside B. 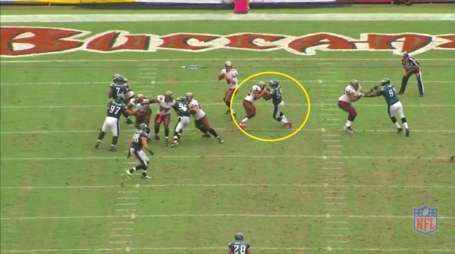 With Barwin dropping into coverage, Zuttah's zone is now effectively clear, so he looks round to see if there is help needed elsewhere. Larsen is washing Kendricks up through his zone, while Martin - who hasn't always been the greatest of pass blockers - gets in a very good block on Ryans, rising up through him to stop his progress. 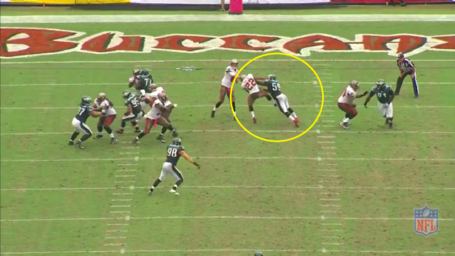 Of course, Martin is called the Muscle Hamster for a reason - he is ultimately a shorter player, and Ryans is able to just throw him out the way. However, that block was all it took for Glennon to find Tim Wright along the sideline - with the tight end catching the ball and making good yardage after the grab for a 36-yard gain, the longest passing play of Glennon's short career.

Yes, there were times when the pass protection looked horrible; there were times when it was absolutely solid. The reality is, though, the Bucs' pass protection looked more like it did in part one of this pass-pro review than it did either the good or the bad plays seen in this part. I hope that Sullivan moves even more towards shorter passing routes, both to play to Glennon's strength and to try and compensate for this sloppy offensive line; and, if going for longer routes, I really would like to see more zonal pass-pro concepts - it prevents this line falling for its biggest weakness (biting on stunts), and as long as the coaches feel confident in the running back's ability to pick up the blitz, I really would advocate a much greater use of these type of schemes. God knows we haven't had much success with the schemes we've mostly used so far this year!