Mark Dominik's job should not be secure with the Buccaneers

The Tampa Bay Buccaneers have talent on their team, but should that save the team's general manager if the Glazers decide to clean house? Mark Dominik's seat should be heating up a little, too.

Share All sharing options for: Mark Dominik's job should not be secure with the Buccaneers

With Greg Schiano's butt firmly in the hot seat, the next question is logical: if Schiano goes, should general manager Mark Dominik follow him? Jason Cole of the National Football Post suggests that Dominik could easily take the fall alongside Greg Schiano.

Dominik's reputation among Tampa Bay fans isn't nearly as bad as Greg Schiano's. The Bucs' general manager is generally seen as a pretty decent roster manager, with the 2012 draft of Doug Martin, Mark Barron and Lavonte David greatly helping his popularity. Clearly, the Glazers could easily sell firing Schiano but retaining Dominik to Bucs fans. After all, this is a very talented team. The issue more than anything appears to be coaching.

But how many general managers survive two coaches, two quarterbacks, four losing season, no playoff appearances in five years and an overall record of 24-45? There's Matt Millen, and then no one else I can think of. Dominik's seat isn't as hot as Greg Schiano's, but it's not exactly cold, either.

Does he deserve to be fired? Let's review what he has produced in five years on the job.

When Mark Dominik took the job in 2009, he promised to build through the draft. Number of players still on the team from that 2009 draft: 0. Oops. If we look at Mark Dominik's overall track record in the draft, it's a lot less sparkly than it might seem at first glance. Doug Martin, Lavonte David and Mark Barron can hide some pretty major flaws.

Mark Dominik's drafts have managed to produce only two Pro Bowlers: Gerald McCoy and Doug Martin. In addition to those two, Mike Williams, Lavonte David, Mason Foster and Mark Barron are the only real standouts. Late-round picks have yielded little more than a fullback and a special teams standout. Each year, his early drafts look worse and worse.

On 48 picks, Mark Dominik managed to draft six players who are unequivocal hits, and two late-round special teamers and role players who are hits relative to their draft position. He has a whopping six busts in the first four rounds on fifteen picks, not counting 2013. That's a pretty awful track record. The only thing that saves it from being a disaster is the 2012 draft, which looks pretty spectacular so far. But then, the last four picks in that draft don't look great either.

"Build through the draft" was Mark Dominik's go to phrase when he took the job in 2009, and he continued to say it throughout 2010 and 2011. Surprisingly, that sentence has faded from use over the past two years as they've spent more and more money on highly-priced free agents. Perhaps it shouldn't be a surprise that very few of their most prominent players were acquired through the draft.

So, free agency then? He did a good job bringing in talent over the past two years, there's no denying that. Of course, it's easy to get talent to come to Tampa when you're basically throwing wads of cash at them, but it's still an accomplishment.

If we look at the production of those free agents so far it hasn't been spectacular, though. Vincent Jackson was a great find, and he's been better than I think anyone had a right to expect. He looks better now than he did with San Diego, and that's saying something. However, Carl Nicks has struggled with injuries two years running. That's not something the Bucs could have foreseen, but it doesn't make his track record much prettier. 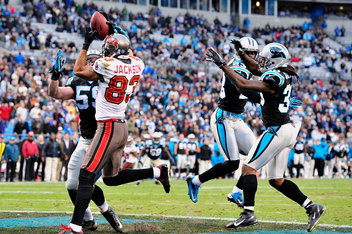 Big names and cheap draft picks are how the Buccaneers have built their team, but can they sustain it?

Darrelle Revis is playing great football, but the coaching staff doesn't appear to look at him like that $16 million dollar per year, two draft pick player the front office saw him as given the way they're using him. Dashon Goldson has been pretty good on the field, but he's in danger of a suspension every time he hits a receiver. Kellen Winslow was great for two years, but then he lost his speed and clashed with the head coach. Was that worth a second-round picks and the richest contract for a tight end in history?

And then there are the mistakes. Oh, the many, many mistakes. Dominik went after Albert Haynesworth in his first year of general manager, but thankfully failed to land him. He then signed Derrick Ward, who was promptly cut the next year after being generally useless. Eric Wright was signed to a huge contract last year and then was cut this offseason after taking a massive pay cut. The Bucs managed to escape from under it mostly due to Wright's own mistakes, and not any merit of their own. Amobi Okoye and Kevin Ogletree were signed to decently sized contracts to fill a role, and then quickly cut.

The free agency record looks great if you look at the hits. But overall, it's been as up and down as Dominik's drafts.

Mark Dominik can hang his hat on two things, at least: contract management, and undrafted offensive tackles. The Bucs are starting two undrafted players at both offensive tackle positions, and they are doing so because both players are very good. Donald Penn was acquired before Dominik became the general manager, but is generally ascribed to his scouting as director of pro personnel. Demar Dotson was signed after having played one year of defensive tackle in college, and has since developed very well. 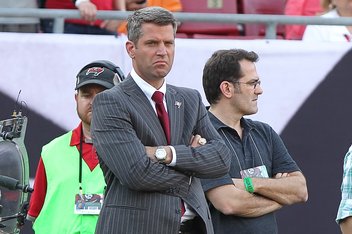 The Bucs do an outstanding job of managing their cap and contracts, but there are some warning signs for the near future. If the Bucs get careless, they could find themselves in cap hell quickly.

The other issue is arguably much more important, though, and Dominik has done an outstanding job there. It helps that he had one of the lowest cap figures in the league after the 2011 lockout, but his pay-as-you-go structure has helped keep the cap manageable both now and in the future despite spending more than any other team over the past two years. He managed to get Darrelle Revis to sign a contract with "no" guarantees (his first two years are all but guaranteed, of course).

Although the numbers tend to look big on the contracts handed out by Dominik, their structure allows him to get rid of underperforming players quickly and at minimal cost to the organization. They can help him pressure players to take pay cuts once they start to decline and their contracts become unwieldy. If Dominik can point to one thing he does really well, it's cap and contract management. But that's only one facet in the business of being a general manager.

If we judge a general manager solely by his ability to collect talented players, we have to say that Mark Dominik has at least built a very talented team this year. But it still has a few clear holes. The tight end position is a complete mess, and the Bucs can't produce any kind of edge rush after letting their top pass rusher walk. Michael Bennett is now racking up sacks and pressures for the Seattle Seahawks while Da'Quan Bowers languishes on the bench for the Bucs.

Still, there's more to a team than talent alone and there's no denying that Dominik does do a good job of managing the salary cap. So there's that.

Overall, I don't think Mark Dominik has been as bad as some of these overviews suggest. But we can't call his reign an unmitigated success, either, and with a career record of 24-45 record we can't exactly point to a history of winning to back him up. Whether or not Dominik will be let go if Schiano is removed remains to be seen. He could move to more of an executive role, as Rich McKay did with the Atlanta Falcons, if the Glazers want to retain him but find a new general manager. One thing is certain, though: his seat shouldn't be safe.