All-22: Tim Wright emerges as a weapon for the Buccaneers

The Tampa Bay Buccaneers may finally have found their receiving tight end in Tim Wright.

Share All sharing options for: All-22: Tim Wright emerges as a weapon for the Buccaneers

The Tampa Bay Buccaneers haven't had a quality receiving tight end since Kellen Winslow left, and you could argue about his 2011 season as well. Mike Sullivan's offense never seemed to place a great emphasis on the position in the passing game despite the fact that a tight end is almost always on the field. That appears to be changing with the emergence of undrafted rookie Tim Wright, though.

Tim Wright is one of many, many Rutgers players to sign with the Bucs over the past two years, and he's probably the most intriguing one despite the fact that he went undrafted. He was a receiver in college, but the Bucs converted him to tight end this offseason after

"I think this kid [Tim] Wright is a very intriguing player," Greg Cosell told Justin Pawlowski of 98.7 The Fan. "He's getting more and more snaps as kind of a hybrid tight end/wide receiver. He's got excellent potential as I see it as a movement receiving tight end because of his size and length.I think that he's a guy I would expect, as they move forward, can become a bigger factor in what they do. Glennon was clearly comfortable throwing him the ball."

That was clearly on display against the Arizona Cardinals, as Glennon found Wright for five catches for 41 yards on six targets. Three of those catches went for first downs, and three of them were intermediate throws, precisely the area of the field the Bucs had issues attacking in previous games.

I'm not sure why Vincent Jackson ends up on the same area of the field, though the fact that he can't get off the cornerback's jam probably has something to do with it. But that play by Wright shows off his potential and the connection he has with Glennon. He manipulates the linebacker, makes a sharp cut to get easy separation and catches the ball away from his body. His long arms give him a long catching radius, despite his end zone drop against the New England Patriots.

He doesn't only do it to linebackers, but he can beat safeties too. 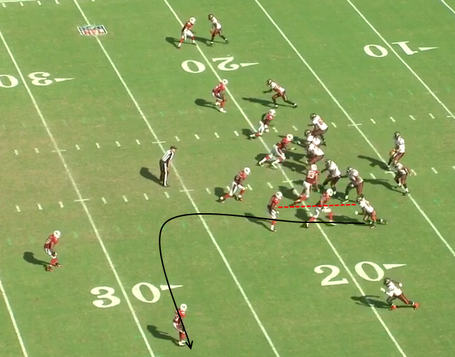 That really is everything you're looking for in a receiving tight end: the ability to beat linebackers and safety in man coverage. An ability Luke Stocker has yet to show in the NFL. Wright's long arms give him an outstanding catching radius, too, and he does a good job corralling a ball that is just ever so slightly thrown behind him.

Even more importantly, Wright can attack the seam. The Bucs have struggled to attack that area of the field under Mike Sullivan, with Vincent Jackson in the slot being their most important weapon in that area of the field. Glennon was much better throwing to the middle of the field both in college and against the Cardinals, though, and Wright will help them use that ability to maximum effect.

This throw results in another first down on first-and-ten in a two-minute drive. The only reason this doesn't go for a much longer gain is the fact that Mike Glennon is late with his throw, which forces him to throw the ball behind Wright to keep it away from the Arizona defenders. That's something Glennon struggled with during the second half: ball placement and anticipation. Not unexpected in a rookie quarterback, but still something I'd like to some improvement in against the Philadelphia Eagles.

One thing Wright will have to improve on if he wants to have a longer career in the NFL is his blocking. Right now,it's just not of an acceptable level. He was in on 44 plays against the Cardinals, almost all of them pass plays. On the rare occasions where he did get asked to block, he got blown up.

That's just disastrous blocking, and it wasn't an isolated occurrence. His size may have something to do with it, as he told Pewter Report that he weighs 235 pounds and would like to get up to 240 pounds. His technique is awful, though, as his awareness. Whenever he was asked to block he would keep looking back to see if the running back was past him, which made things incredibly easy for defenders. You can't take your eyes of what's happening.

Of course, him being a bad blocker should be no surprise. He was a receiver in college, and it's unfair to expect him to be able to block linebackers and defensive ends at this point in his career. It's a skill he will have to develop to survive, but he has time to develop it. He doesn't have to be a devastating blocker, as few receiving tight ends are, but he will have to find a way to not be a liability in the running game.

Right now, Wright is little more than a receiver. That means that the Bucs are exceedingly likely to pass when he's on the field even aligned tight to the formation and it makes the decision who to defend him with much easier for defensive coordinators, which removes some of the advantages of having a quality receiving tight end. They can attack the middle of the field, but they also offer you formation versatility.

If opponents defend a quality tight end with a linebacker or safety, the offense is likely to exploit his receiving mismatch. If opponents put a cornerback on him, the running game comes into play. That's the quandary you want to put defenses in, and Wright isn't doing that right now.

Still, Tim Wright has intriguing potential as a receiving tight end or perhaps slot receiver in the style of Marques Colston. That's enough to get him on the field in passing situations, and he has clearly developed a rapport with Mike Glennon. Tom Crabtree returns as the primary tight end this week, but Wright should still be able to contribute in two tight end sets.

Wright isn't a great player right now, but if he continues to develop the Bucs at least have another intriguing weapon on offense on their hands.