The NFL has kindly published the All-22 "Coaches" Film of every game, giving us an unprecedented look of the game, with none of the cutoffs and limitations of TV angles. We can now see everything that happens on the field - and that gives us a much better chance of understanding what happened on a play. Of course, this doesn't mean we will actually know what happened on every play: there's too much we can't know because we still don't know what was called in the huddle, or how players are coached to react in certain situations. Still, we can do much better - and that's what we're going to try to do today.

I've decided to take a look at two consecutive plays in the third quarter on defense: a 32-yard pass to Steve Smith, followed by a 22-yard touchdown pass to Brandon LaFell. Those two plays turned the game from a rout into a competitive contest, and both plays featured two wide-open receivers in what appeared to be a blown coverage - and I want to know who was responsible. First, there's the Steve Smith catch: 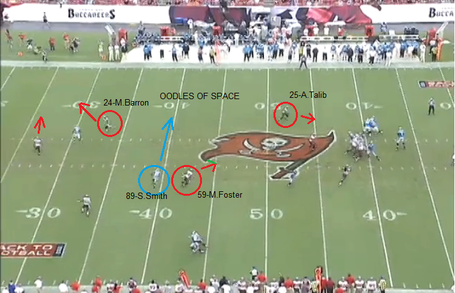 It should be fairly easy to see what's happening up there. The Bucs are playing a three-deep shell, with zone coverage underneath. Brandon LaFell is deep and drawing Mark Barron and Ronde Barber with him, while Steve Smith comes underneath in behind Mason Foster. Smith is going to run into wide open space with no one even close covering him.

At first glance, it may seem that Mason Foster is at fault for letting Steve Smith go - but that's unlikely. He's clearly playing zone coverage, and there's no way the coaches are going to ask him, not the fastest linebacker around, to run across the field with one of the most explosive wide receivers in the NFL. And if they are asking him to do that, well, he's going to lose every time anyway. No, Mason Foster jumps down to react to the running back coming into his zone, passing Steve Smith off - but to who?

There's no one close to Smith to know who was supposed to pick up the receiver, but there are good options; Aqib Talib and Mark Barron, both indicated on the field. Talib is very close to the line of scrimmage covering absolutely no one - but there's no one in his zone to cover. Steve Smith is a little deep for an underneath cornerback to be responsible for picking him up, but Talib should at least be aware of players coming into that zone.

Mark Barron is another good option. Smith is running fairly deep and it's likely that Barron's supposed to pick him up. Unfortunately, Barron's a little preoccupied with Brandon LaFell running deep - and rightly so. LaFell was running away from Barber, and a deep ball could have easily turned into a touchdown, and Barron was taking away that option. He had to choose between a rock and a hard place if he was indeed responsible for Smith. Ultimately, it's impossible to know who was actually in the wrong here - if anyone was. It's also possible that this was an intentional design flaw in the coverage, with the coaches expecting pressure to get there before a receiver had a chance to cross the formation. That didn't work, though, as Newton had a clean pocket to step up and throw an easy ball for a 39-yard gain. 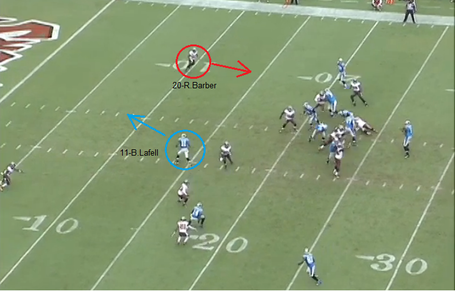 Do you see the problem yet? It's pretty easy here: Brandon LaFell runs to open grass, while Ronde Barber jumps down for some completely mysterious reason. Easy touchdown. This one almost certainly has to be on Ronder Barber, although Mason Foster in the middle might deserve some of the blame too, depending on the call. It doesn't look like he's supposed to drop to the deep middle to take away this kind of seam route, but it's certainly possible.

In any case, this is a classic way to beat a two-deep safety shell: run someone down the middle of the field, in between the two safeties. In fact, the Tampa 2 was designed specifically to stop this weakness by having the middle linebacker drop deep and take away this very play. But with a two-deep shell like this, the safeties need to squeeze inside a little when they're not being attacked on the outside. And there's one thing a safety absolutely can't do here: jump down and leave the deep zone undefended.

Unfortunately, that's exactly what Ronde Barber does. He's always been a gambler, and he could be one at cornerback because he had safety help over the top. Now he's the safety, and he cannot jump down like this - especially not when there's absolutely no reason to do so, like here. Stay deep and act like a safety - don't try to be the hero. This could turn into a serious problem if Barber keeps doing this throughout the season, because opposing quarterbacks will take advantage of lapses in coverage like this.

If Barber had been a little deeper and had seen LaFell coming into his zone, he could have easily adjusted and tracked LaFell going deep. Barron does notice LaFell and can be seen moving toward him, but he stands no chance of getting there in time. Barber does - but not if he jumps out of position, the way he's doing in that play.

After much praise has been heaped on both Mark Barron and Ronde Barber this week, it's interesting to see that each of them could be responsible for some of the blown coverages on defense. On the touchdown, it's almost impossible for Ronde Barber not to be at fault. On the big play to Steve Smith, though, Barron could be responsible - but so could Talib, or perhaps even another defender depending on the defensive call. It should be clear, at least, that the Bucs have improved on defense - but there are still concerns. And tales of Ronde's quick adjustment to life at safety may have been exaggerated.