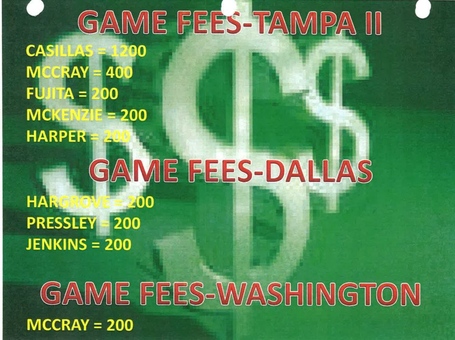 The NFLPA has released the evidence of a bounty program in New Orleans that was given to them by the NFL earlier today. The evidence consists mostly of a long series of extremely poorly-made powerpoint slides that point to a bounty program and an intent to injure players. Whether or not that evidence is solid enough to punish players is largely in the eye of the beholder. The only relevant beholder is Roger Goodell, however, as he's the one with the power to suspend the players involved - which he has done. Plus, he's the person who hears the appeals.

As a Bucs fan, two things about this evidence stood out to me. First, Gregg Williams was damn awful at making powerpoint slides. Half of them feature nearly illegible text because the background and font color don't mix, and most of them are just really ugly. The other thing that stood out: one slide referring to the Tampa Bay Buccaneers and a number of 'game fees' presumably earned by players during the week 16, 2009 game between the two teams. Incidentally, that game was one of just three wins for the Buccaneers that season, and one of just two losses for the New Orleans Saints. The relevant page under item 11, at page 78 of the first set of items.

In all, the Saints collected some $2,200 in bounties that game due to various acts. It's not clear what those acts were, and they could easily have been for normal acts during the game: forcing turnovers, tackles for loss, quarterback hits, sacks and other plays like that. Only one offensive player for the Bucs was injured during that game, and game footage doesn't show whether Earnest Graham was injured because of contact with a defender.

The fact that there were $2,200 in 'game fees' for the Bucs game that year isn't really all that interesting, in part because we don't even know what, exactly, these fees were for. In fact, this evidence isn't that interesting or relevant: Roger Goodell doesn't really even need to show the evidence to justify these suspensions. But they do show pretty clearly that there was at least a pay-to-injure scheme going on in New Orleans. They also show that you can be an NFL coach with terrible powerpoint skills.