The Tampa Bay Buccaneers had to win four straight games to have a realistic chance at the playoffs, and had a seemingly easy matchup today. But that easy matchup turned against them, as they lost a game that was supposed to honor the 2002 Super Bowl Buccaneers.

As John Lynch, Simeon Rice, Dexter Jackson and Warren Sapp looked on, the Buccaneers' pass defense looked nothing like the defense they represented. Facing a rookie quarterback in his fourth start, the Bucs couldn't come up with crucial stops late in the game to preserve an 11-point lead.

It almost turned into a very different story. One where an inconsistent Josh Freeman redeemed himself for a terrible first half. One where Doug Martin churned out yards on the ground to beat the Eagles. One where Danny Gorrer caught a last-second interception rather than dropping it. One where the defense channeled the 2002 Bucs, managed six sacks and then shut down Nick Foles on the final drive of the game.

Alas, it was not to be. When push came to shove, the Tampa Bay secondary simply could not step up. With 7 minutes left in the game, the Buccaneers had taken an 11-point lead. They had scored 21 straight points, after being shut out in the first half. All they needed to do was limit Nick Foles, a quarterback they had shut out in the second half and managed to sack six times throughout the game. 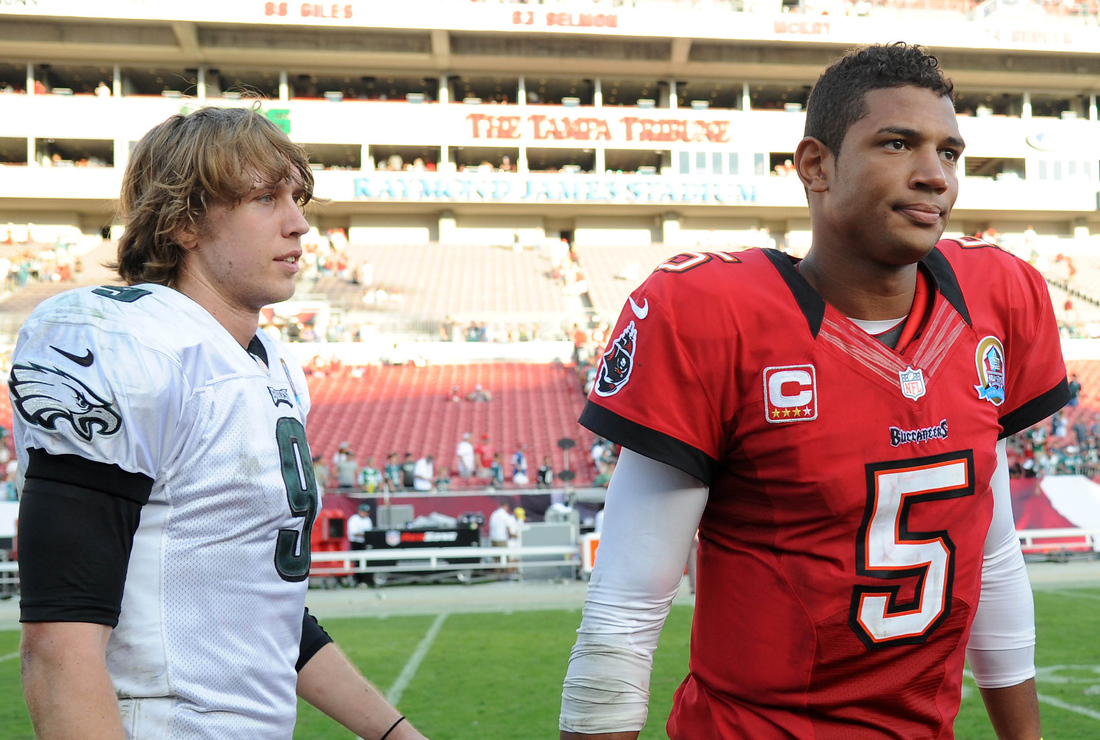 And yet, they allowed completion after completion, as Foles went 6 of 7 for 76 yards and a touchdown on an eight-play drive. All they had to do then was run out the game with Doug Martin, who had gone over 100 yards in the game, the first rusher to do so against the Eagles this season. And yet, with 2:55 left in the game, the Bucs faced third-and-eight. And despite seeing his secondary roasted on the final drive, Greg Schiano chose to play it safe. He called a running play with Doug Martin to burn a Philadelphia timeout. No going for the throat, no aggressive coaching, but the conservative gameplan we've come to expect.

At that point, the Bucs were far from doomed. The Eagles got the ball at the 36-yard line and needed to go 64 yards in 2:44 with no timeouts. And yet, the secondary failed again. The Bucs forced two fourth downs on the drive, and gave up both. It all came down to a last-second play. One final down from the goal-line. One final hold for the Bucs defense. And, as has been the case so often this season, they simply couldn't come up with it. 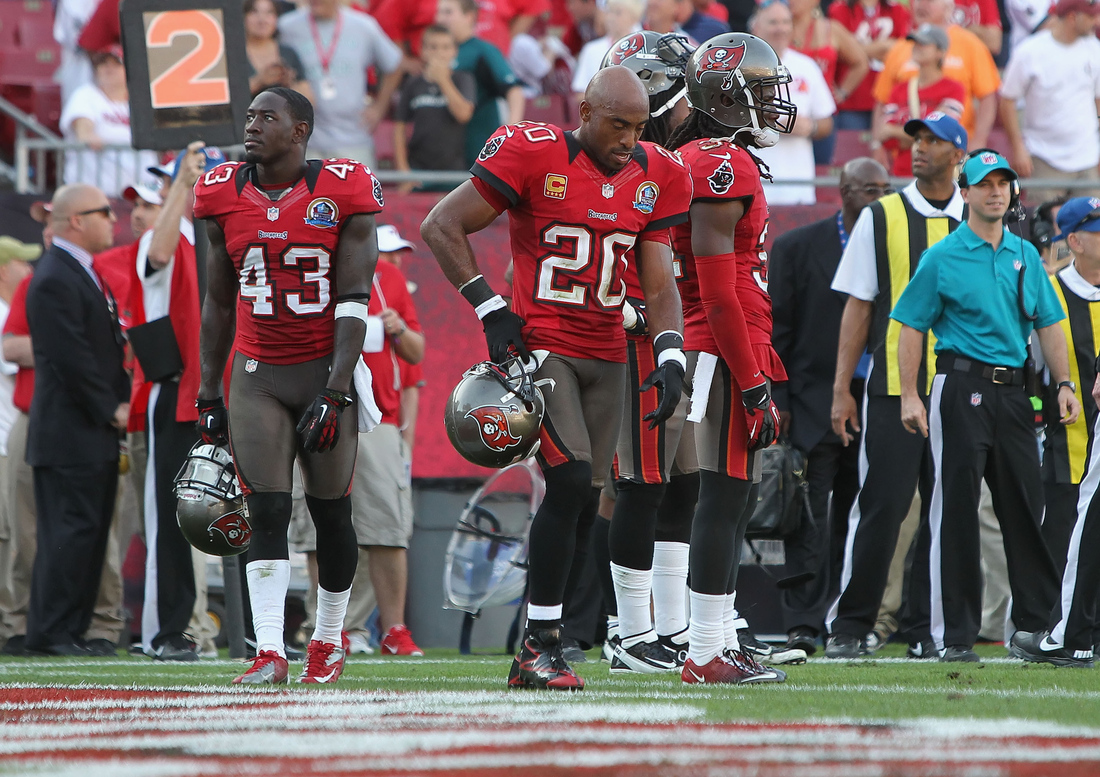 Was it all the defense's fault, then? Absolutely not. The defensive line played its heart out, with six sacks, a ridiculous 13 quarterback hits and ten tackles for loss. Michael Bennett was a monster, getting two sacks, four tackles for loss and four quarterback hits. Gerald McCoy finally had another big game, getting two sacks, three quarterback hits and three tackles for loss. Cornerback Anthony Gaitor appeared to be all over the game in his first game back from injury. And as usual, the Bucs' run defense was dominant: Bryce Brown was held to just 6 yards on 12 carries after amassing 347 yards in his previous two games. Nick Foles was the Eagles' leading rusher, and as a team Philadelphia managed just 1.8 yards per carry. 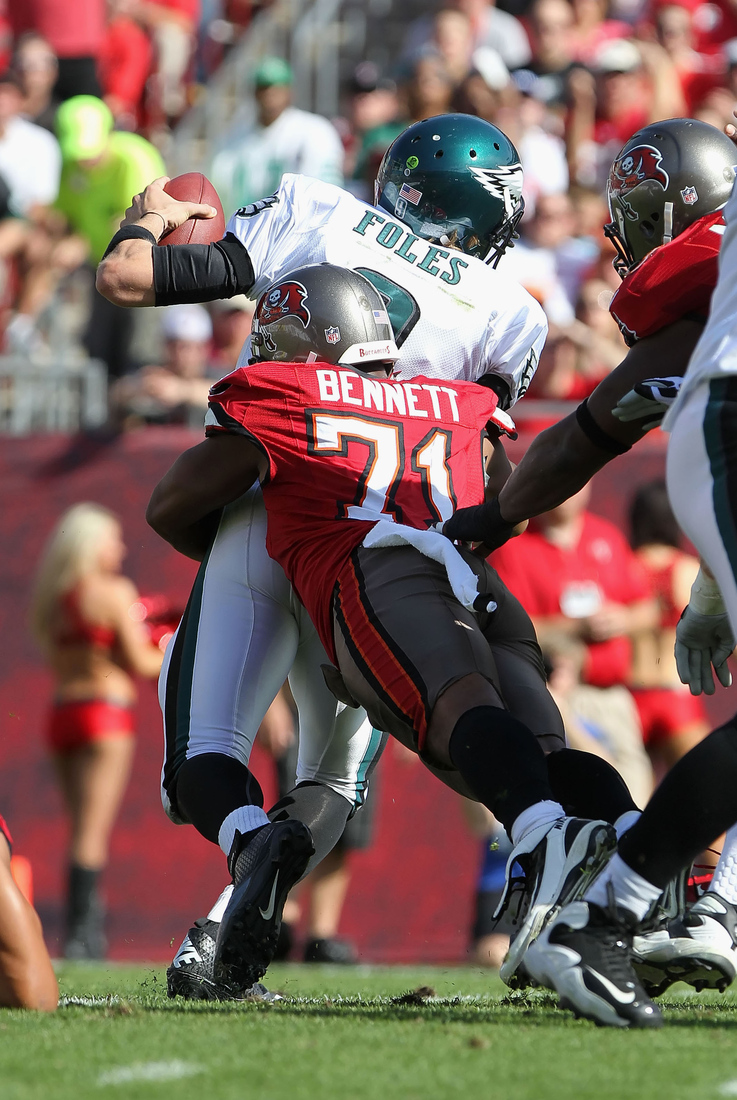 But most importantly: the offense completely choked in the first half.

Once again, we were reminded that Josh Freeman is an inconsistent quarterback. Although he led the Bucs to 21 unanswered points in the second half, he couldn't get anything going in the first half. Freeman consistently missed open receivers, and could not punish a struggling Philadelphia secondary. Freeman completed just five of 16 passes in the first half, managing 61 yards and being sacked twice. He didn't turn over the football, but it was one of the worst halves of football he's played in his career.

And yet, the second half was different. He woke up, played well, and got the Bucs the points they needed. He even blocked for Doug Martin on one play. Martin, by the way, managed to go off for 128 yards and a touchdown on 28 carries against a defense that hadn't allowed a 100-yard rusher all season long. Vincent Jackson, too, burned this defense, putting up 6 catches for 131 yards and a touchdown. Yet none of that erases what was a putrid first half of offensive football.

To be fair, these Philadelphia Eagles looked nothing like the Eagles I had seen on film. They played hard on defense, didn't blow any coverages and didn't pass up the opportunity to tackle anyone.The Eagles played better than they had in perhaps any previous game.

And yet, it came down to the usual problems for the Buccaneers: their secondary wasn't good enough, while Freeman had streaks of poor play. They had an opportunity to stay in the playoff race, and they blew it. That's the story of this 2012 Tampa Bay team: competitive play, but coming up just short in the end.

Da'Quan Bowers left the game some time in the third fourth quarter and did not return. It is not clear whether he was injured.

Where they go from here:

The Tampa Bay Buccaneers have a mathematical chance at a Wild Card spot, but not a real chance. They will travel to New Orleans to take on the Saints and get a chance to at least end the season with a winning record.