The Tampa Bay Buccaneers managed to beat the Carolina Panthers in the end in one of the craziest comeback victories in the history of the team. Josh Freeman, Vincent Jackson and Doug Martin led two game-ending drives to win the game in overtime.

The last time the Tampa Bay Buccaneers played an overtime game, they saw their playoff hopes dashed by the 2010 Detroit Lions. This time, things would be different.

With one minute to go and no timeouts, the Tampa Bay Buccaneers were trailing 21-13. They had to go 80 yards, unable to stop the clock, get a touchdown and then add a two-point conversion to even tie the game. Then they'd have to win the game in overtime to keep their playoff hopes alive, and with an offense and defense that had struggled all game long, that seemed like a tall order.

But Josh Freeman, who was named Captain Comeback two years ago, came to life for the first time in the game. A sputtering offense drove down the field quickly and decisively, aided by a 15-yard unnecessary roughness penalty after Carolina linebacker Thomas Davis hit Tiquan Underwood in the head. The offense's best play on that drive was a 24-yard touchdown throw to Vincent Jackson, a ball that was squeezed in between three defenders. Freeman was leveled by Charles Johnson as he released the ball, but still managed to make a throw that maybe four other quarterbacks in the league could even attempt. Vincent Jackson held on despite being hit by three defenders and the goalpost, and the Bucs were ready to win it. 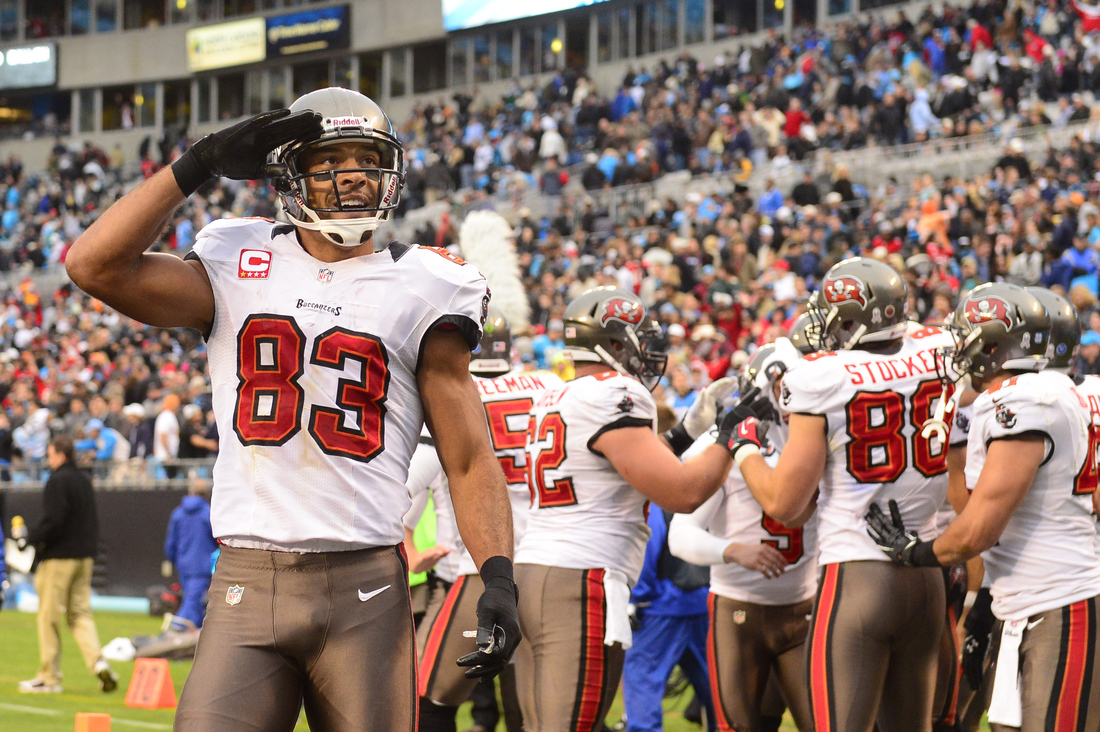 After pulling that touchdown throw out of nowhere with just 20 seconds to go, the rest seemed easy. A hard play-action fake got Vincent Jackson free for the two-point conversion. A coin toss gave the Bucs the ball in overtime, and they then drove down the field with relentless efficiency to cap the game with a 15-yard touchdown to Dallas Clark. O those two drives, Josh Freeman completed 7 of 9 passes for 97 yards, two touchdowns and a two-point conversion.

Meanwhile, Doug Martin contributed as he has throughout the season. With excellent pass blocking, but also with 54 total yards on those two drives on the ground and through the air. The rookie now has exactly 1,000 yards on the season, and as if that wasn't impressive, he now leads the NFL in yards from scrimmage. As has been the case every game since the bye week, Doug Martin's heroics helped the Bucs win the game, despite a fumble at the goal line 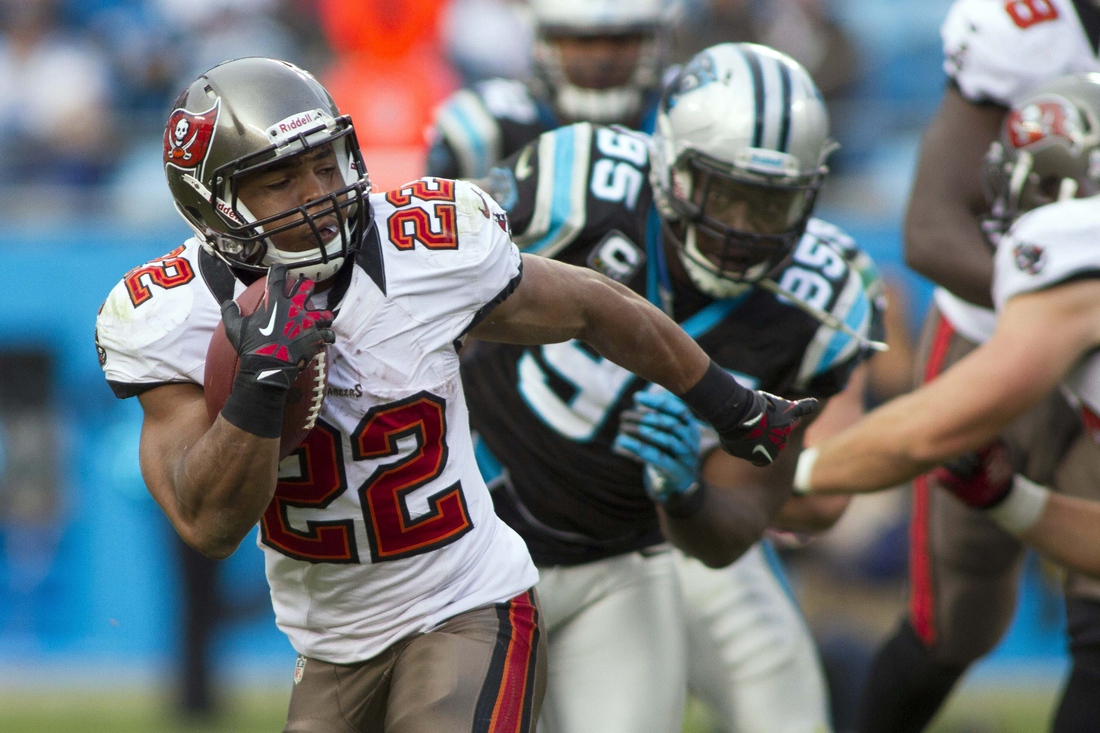 Those late heroics were only necessary because of some earlier inept play on both the defense and offense, though. Despite jumping out to a 10-0 lead thanks to a fumble recovery and two defensive stops, followed by quick and effective drives. But then, the Buccaneers collapsed: a normally explosive offense turned into a weak approximation of an NFL offense, while the passing defense continued to be horrid.

Throughout the first half and much of the second half, the Tampa Bay offensive line appeared incapable of handling a stout Carolina defensive line. Allowing one sack and five official quarterback hits on the game may not seem like much, but the Panthers got to Freeman easily and often. Before the final two drives, Freeman had managed to complete just 18 of 37 passes for 151 yards, one touchdown and two interceptions. Pressure affected his throws, while a few miscommunications with his receivers exacerbated the problem. One interception was the result of a poor throw while being pushed to the ground, while the other was either a horribly inaccurate throw, or a miscommunication with Vincent Jackson. Given Freeman's play throughout the game, either is a possibility. 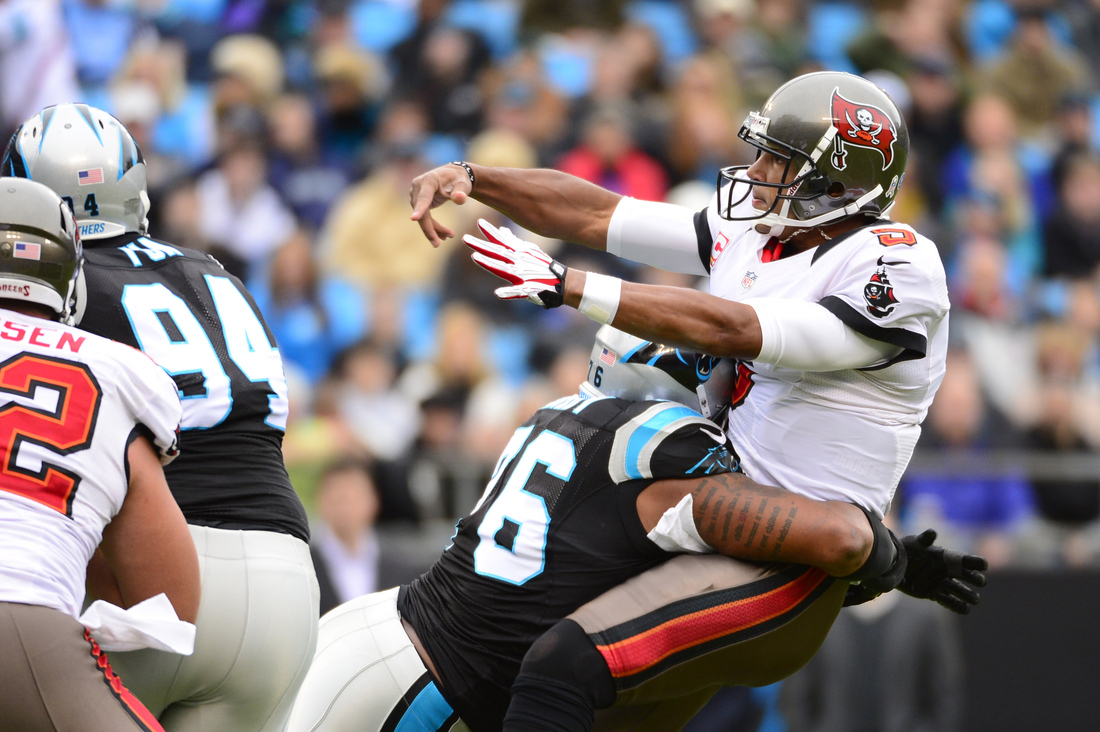 Meanwhile, the defense couldn't get a stop. The Tampa Bay defense forced 0 turnovers and allowed Newton to have his way, as the quarterback racked up 292 yards rushing and receiving. He did that despite constant pressure by a defensive line that managed to sack him twice and tackled him for loss two more times. The back end simply could not hold up in the end, as it has struggled throughout the season. Eric Wright leaving halfway through the game with his recurring Achilles injury didn't help matters.

The Tampa Bay Buccaneers' hopes were seemingly crushed by the referees on a fourth-and-one from the goal-line. Doug Martin appeared to squeeze into the endzone, but fumbled the ball just as he crossed the plane. The referees called it a touchback after the Panthers recovered, and an automatic review couldn't deliver indisputable evidence to overturn the call, despite the ball pretty clearly crossing the plane before it came out.

The Carolina Panthers then responded with an 80-yard touchdown drive, slicing up a Buccaneer defense that looked worn out. Mark Barron in particular was victimized during that drive, as the rookie has struggled against the pass recently. That drive put Carolina up 21-10 with just six minutes left in the game, and the Buccaneers appeared to be doomed. Their offense had struggled and their defense didn't appear to be capable of getting a stop.

But the Tampa Bay Buccaneers would not be denied, and they stepped up in the fourth quarter. Forty minutes in real time a defensive stop, a touchdown, a two-point conversion and an overtime opening drive later, Dallas Clark tip-toed into the endzone to give Tampa Bay its sixth victory of the season.

Injuries: Cornerback Eric Wright had to leave the game in the third quarter and appeared to have re-injured his Achilles tendon. He did not return.

What's next: The Bucs are right in the playoff hunt, tied with Seattle for the second wild card spot. They face the division-leading Atlanta Falcons at home next week in a crucial game in the playoff race.