Tampa Bay managed a defensive, special teams and two offensive touchdowns to beat the San Diego Chargers 34-24 for their fifth win of the season.

These Tampa Bay Buccaneers won't disappoint. Despite an awful defensive display for most of the game, the Bucs managed a solid 34-24 win over the San Diego Chargers. Two interceptions, one returned for a touchdown, sealed the victory, as the Bucs offense was efficient on just eight possessions.

Josh Freeman once again had an efficient, though not explosive, game. Completing 14 of 20 passes for 210 yards and two touchdowns to Dallas Clark and Tiquan Underwood, the Tampa Bay quarterback looked accurate and decisive for his second consecutive game. The offense as a whole executed their assignments and managed to put up 20 points, despite limited opportunities due to defensive scores. Doug Martin produced 119 yards from scrimmage,his fifth consecutive game with more than 100 yards from scrimmage, while Vincent Jackson led the Bucs with 5 catches for 59 yards. 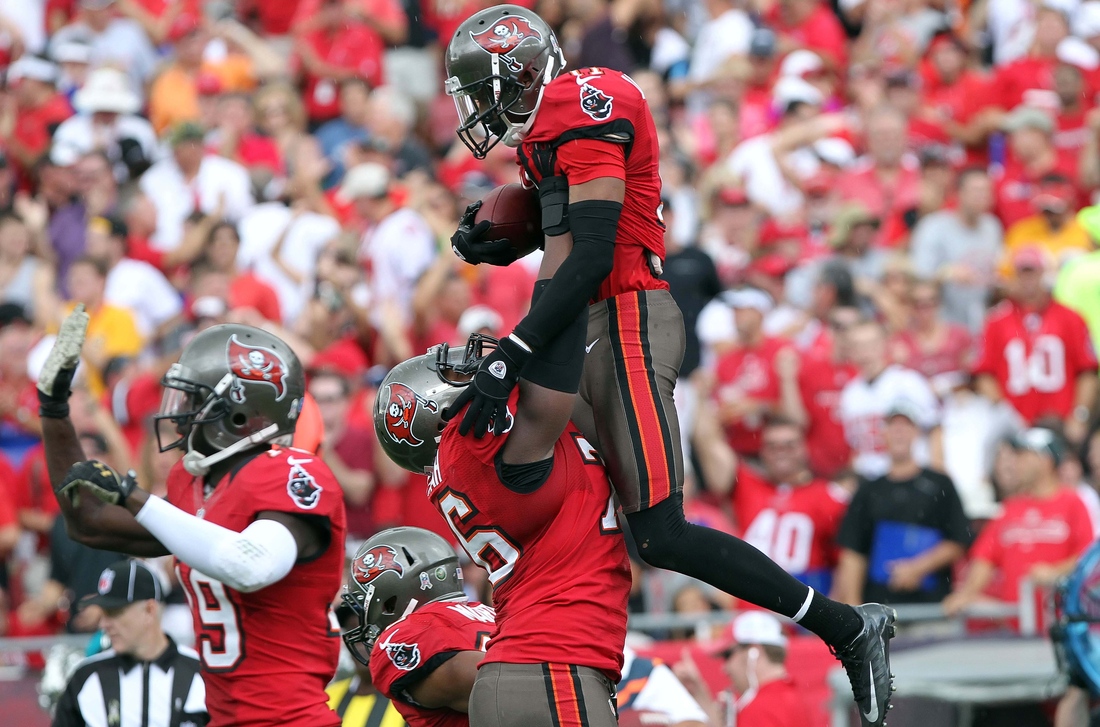 A solid offensive effort was not enough to put the Bucs ahead in the first half, however, as the pass defense faltered throughout much of the game. San Diego quarterback ended up completing 29/37 passes for 337 yards and three touchdowns, destroying a Tampa Bay secondary that had given up more yards than any other team in the NFL coming into the game.

That pass defense started out poorly, giving up an 80-yard pass on the third play of the game. Leonard Johnson thought he had tackled Danario Alexander on a quick slant, but Alexander's knee never hit down and he was allowed to race down the field for the final 70 yards to finish off the play. A simple statistic illustrate's the defensive struggles: at one point in the first half, Philip Rivers had completed 16 of 18 passes for 218 yards and three touchdowns, and one of those two incompletions still produced a first down through a defensive holding penalty.

As usual, the run defense was dominant. Lavonte David was everywhere, notching 14 total tackles in yet another dominant performance in run defense. San Diego managed to produce 103 total rushing yards on 26 carries for 4 yards per carry, but that production underrates Tampa Bay's defensive effort, preventing the Chargers from ever basing their offense on the run.

While the defense struggled, special teams kept the Bucs in the game, producing a touchdown on a blocked punt. The Bucs have been awful on special teams this year, and their return units were no better than usual against San Diego, but they have managed to get their hands on a large amount of punts. Dekoda Watson blocked the Mike Scifres punt, while Adam Hayward returned it for a touchdown. 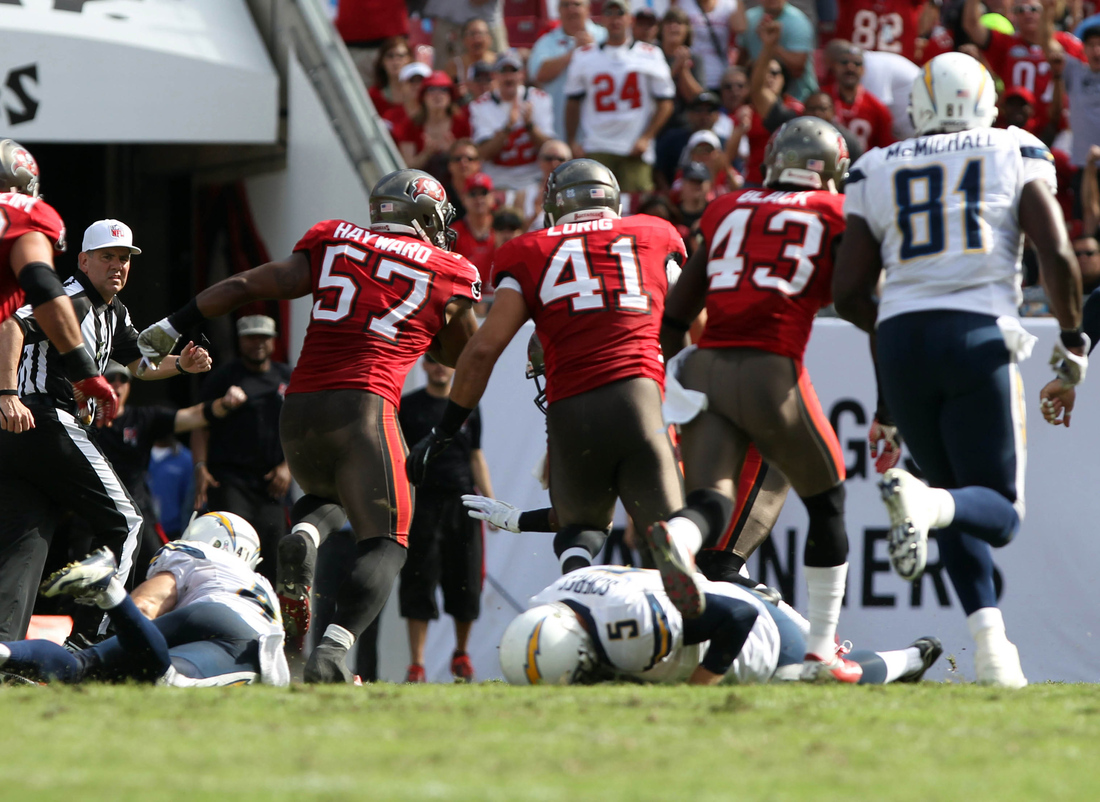 The offense continued to productive, with Josh Freeman passing for 10.5 yards per attempt and the offense as a whole producing 6.5 yards per play against a solid defense. Although the total production on offense wasn't particularly impressive, they made the most of their opportunities and continued to look like an elite NFL offense.

In the end, though, it was the pass defense who had to win the game for the Tampa Bay Buccaneers. Rookie Leonard Johnson managed his third interception in three games, picking off an awful Philip River pass as the quarterback was chased by defensive tackle Gerald McCoy. The Bucs had managed to pressure Rivers fairly consistently, but an awful secondary gave up repeated quick passes, giving the Bucs just two sacks.

None of that mattered as Leonard Johnson raced 83 yards to the endzone, as the undrafted rookie reaffirmed his status as the third cornerback on the team. Recent practice squad callup LeQuan Lewis then put the game definitively out of reach for the Chargers as he picked off Philip Rivers at the end of the fourth quarter. 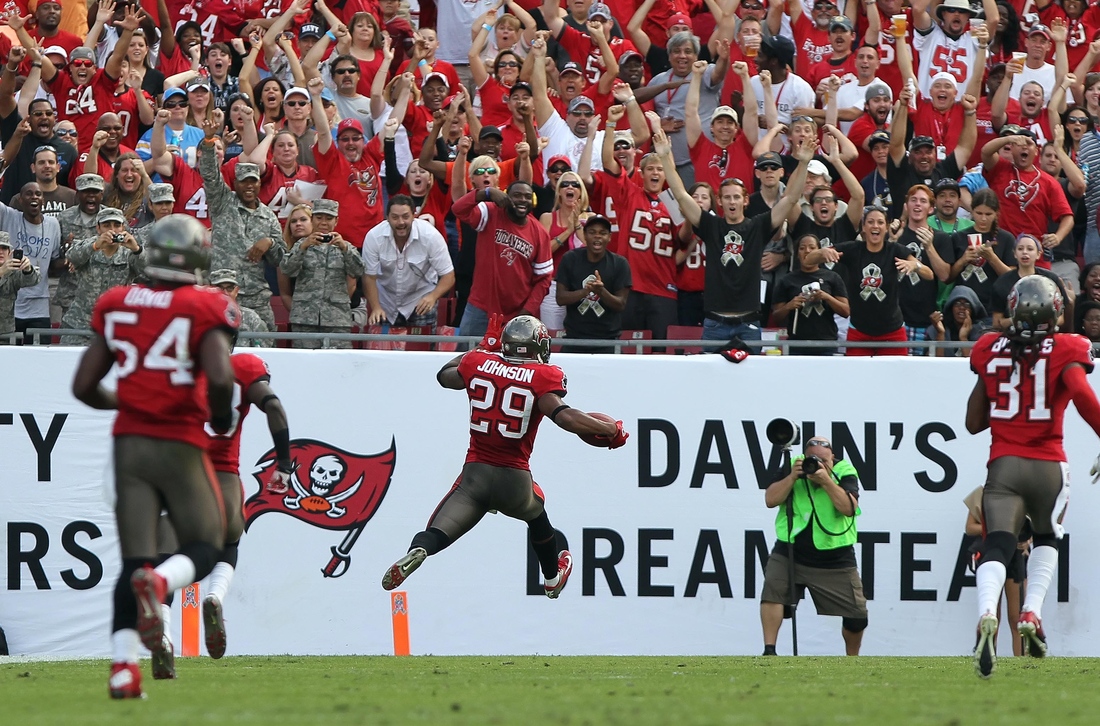 The Bucs managed another win. It wasn't consistently pretty and there were plenty of struggles, but this team is proving to be good enough to beat any team on a good day, and they're in position to grab a playoff spot.

Eric Wright left with an ankle injury in the first quarter and did not return. Quincy Black was carted off with an apparent head injury after losing consciousness, but he did wave to the crowd.

The Buccaneers travel to Carolina and take on the Panthers next Sunday.