The Tampa Bay Buccaneers jumped out to an early lead once again, but this time they didn't let go. Hard running by Doug Martin and some key third-down conversion gave the Bucs a dominant win in an unleashed Metrodome.

Rookie running back Doug Martin's 214 yards from scrimmage and two touchdowns propelled the Tampa Bay Buccaneers to their third victory on the season. Travelling to Minnesota on a short week to play on Thursday night was no easy task, but the Bucs are now just the sixth team in three years to win on the road on a Thursday, pushing their record to 3-4 on the season.

The Bucs had been playing some genuine, old-school Buc Ball earlier this season, with defensive contests decided in the fourth quarter, but the tone has changed the past few weeks. With 416 total yards of offense, the Bucs topped 400 yards for the third consecutive game, having scored 102 points in three weeks. The Vikings felt the pain in an embarrassing 36-17 loss. 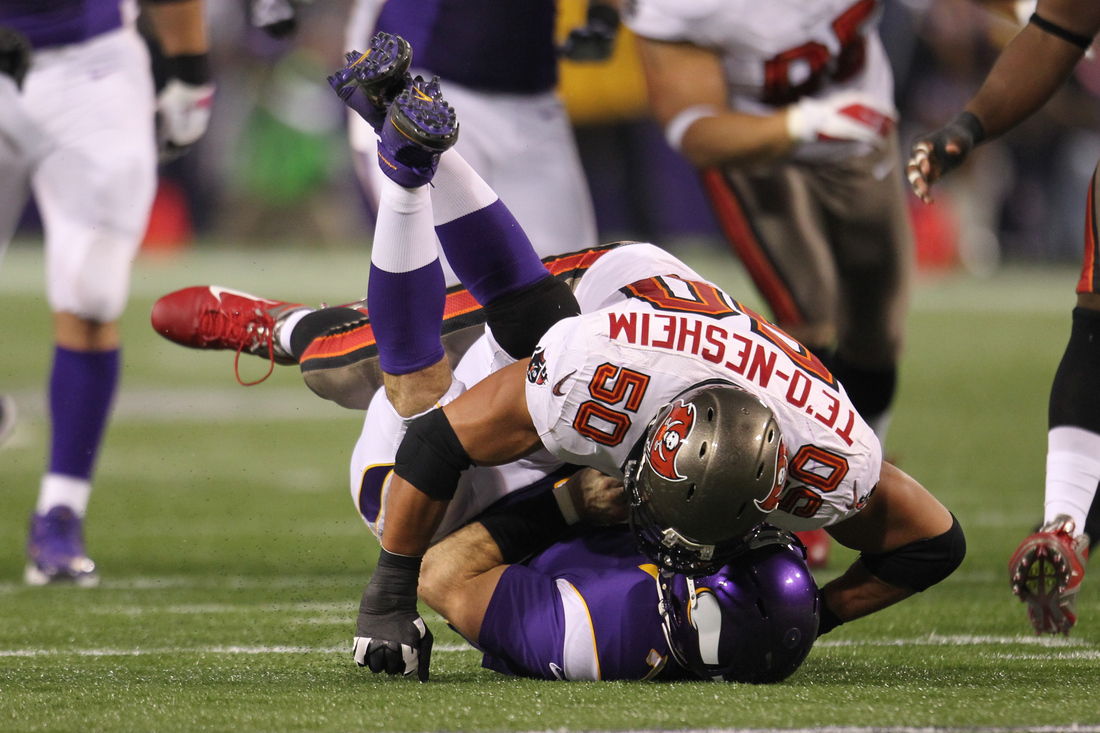 The Bucs got off to a fast start as they've done in most weeks, with two turnovers and some hard running by Doug Martin keying an early 20-7 lead. Doug Martin started the day with a 41-yard run and didn't look back from there. Michael Bennett forced an early fumble leading to another field goal, and a tough toss to Vincent Jackson as Josh Freeman was knocked to the ground set up an Erik Lorig touchdown. Old man Barber than added another forced fumble to set up a Mike Williams touchdown toss in the back of the endzone.

The third-year receiver has been back to his rookie form this year, and showed off his outstanding ball skills once again, managing 6 catches for 68 yards and a touchdown on the day. His 34-yard fourth-quarter catch gave the Bucs a much-needed first down at the end, effectively sealing the game. 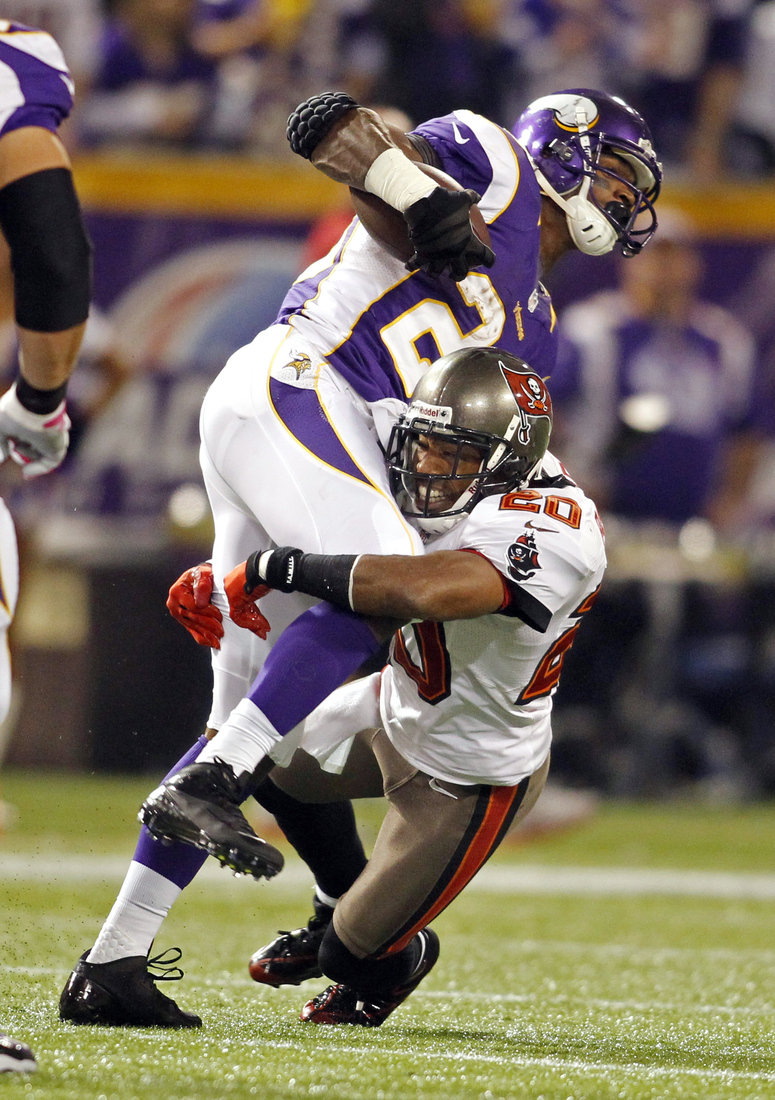 The Bucs weren't secure in their win. An early Percy Harvin score kept Minnesota in the game despite a largely dominant performance on Tampa Bay's side. When Doug Martin pulled off an amazing 79-yard touchdown on a screen pass, the game seemed out of reach at 30-10. But one Adrian Peterson run later, the Vikings were right back in it.

Jared Allen then managed to fire up the crowd and get the Metrodome into the game, as a fight with offensive tackle Donald Penn sparked him toward a quick sack and a three-and-out for Tampa Bay's offense. That shift of momentum didn't last long, however, and Tampa Bay's defense would hold the Vikings to those 17 points for the rest of the game. 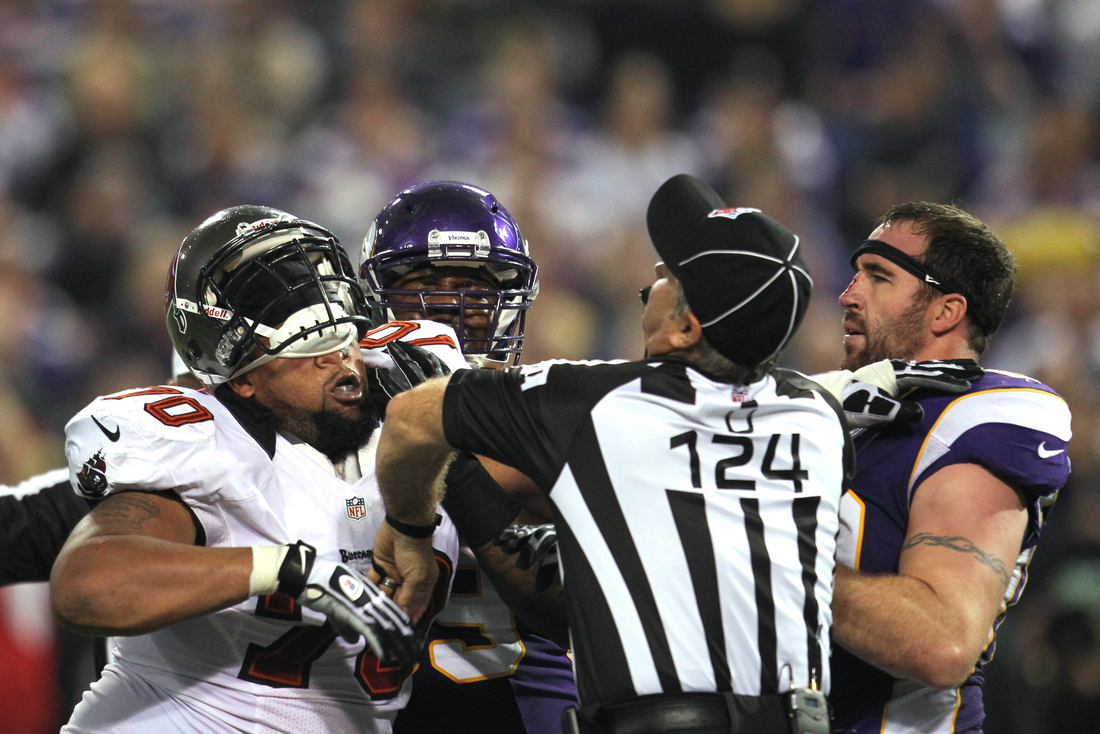 The Buccaneers defense had been much-maligned in recent weeks, but where their pass defense was usually a problem, it was their normally dominant run defense that struggled to cope with Adrian Peterson. Of course, Peterson is the best running back in the NFL and it's hard for any team to limit him. But the pass defense picked up the slack, notching three sacks on the day while undrafted rookie Leonard Johnson notched a late interception in his first career start.

Josh Freeman was allowed to close out the game on magnificent nine-minute, sixteen-play drive in the fourth quarter. That drive featured four third-and-long conversion by the Tampa Bay quarterback who had been inconsistent on the day, but he produced when it counted. The drive was capped off by Doug Martin, who drove Jared Allen backwards into the endzone on his way to his second score of the day. Meanwhile, Josh Freeman posted his third consecutive three-touchdown game, becoming the first Buccaneer quarterback to do so. 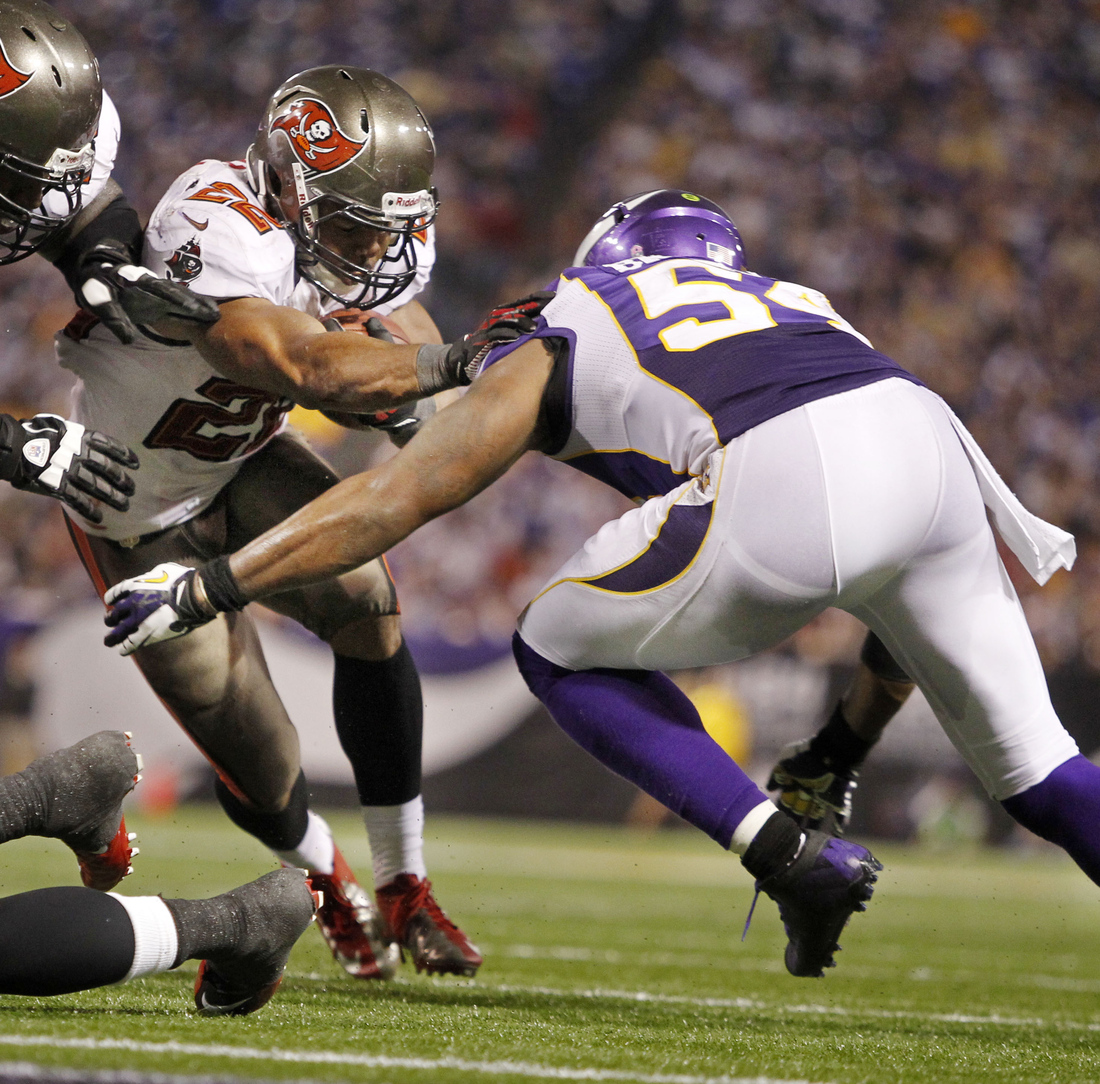 One thing will stand out from tonight's game: Doug Martin's stiff-arm ruled the day. His 214 yards from scrimmage represented over half of Tampa Bay's offensive production and his two touchdowns sealed what should be a breakout performance for the hard running rookie. His 79-yard touchdown catch was a thing of beauty, as he shoved a defensive lineman to the ground while running away from everyone. This was a true break-out performance for the rookie, who got a massive 32 touches on the day and was the team's leading rusher, leading receiver and leading scorer.

The Bucs will have ten weeks days to rest before they travel to Oakland to face the struggling Raiders. The Bucs are 3-4, but they're far behind the Atlanta Falcons in the NFC South, while they're struggling to keep pace in a Wild Card race that has gotten away from them. This win should give them a spark and could put them right back in it, though.

Injuries: Defensive end MIchael Bennett had to be helped off the field at the end of the game. His status remains unclear. Da'Quan Bowers returned to action and played a few snaps, notching one tackle for loss.