The Bucs did well on offense against the New Orleans Saints, but how and why did their offense explode? We go through a couple of plays and show you what really happened.

Josh Freeman threw for a massive 420 yards on Sunday, but he was far from perfect. There were streaks where he was inaccurate or simply missed reads, while there were other streaks where he was nearly perfect - especially near the end of the game. New Orleans played some horrendous football on defense, but we will still break down a couple of interesting plays for you.

Josh Freeman is an improving player, but he's still incredibly inconsistent. That goes not just for his accuracy, but for his decision-making as well. This play is a prime example. 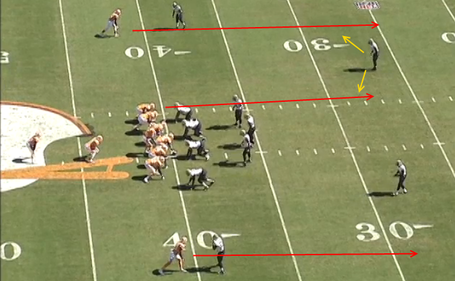 This is a simple play: three receivers will go deep, and Freeman has to hit one of them in stride. To the bottom, Vincent Jackson will run a lone go route, guarded by a cornerback and a safety over the top. To the top, both Dallas Clark and Mike Williams will run go routes, threatening one deep safety together. Obviously, Freeman should be focused on the top routes.

The idea here is that Dallas Clark and Mike Williams will both run go routes. Clark should be speedy enough to beat a linebacker one-on-one (though I have my doubts about that), while Williams is good enough to beat a cornerback one-on-one. The result should be that the safety has to choose between covering Williams and Clark when both beat their defenders - which would lead to one of them being open. And that actually happens: 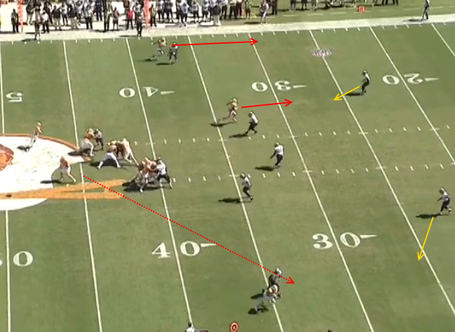 See? The safety's cheating towards Clark, Freeman has plenty of time and if he turns and throws the ball toward Williams, this should be a big gain. Of course, Freeman somehow decides that the double-covered Jackson at the bottom is a much better option. Interestingly, Freeman wildly overthrows Jackson -- which might just be a bad throw, or an intentional throwaway. The question I have is simple: why did he not turn to the side where the Bucs actually have a numerical advantage?

The Bucs still score a touchdown on this possession, so no harm no foul - but this is a good example of Freeman's inconsistency.

This play was really interesting, I thought. We start out with a play-action pass and two crossing routes across the fields -- a fairly standard concept. 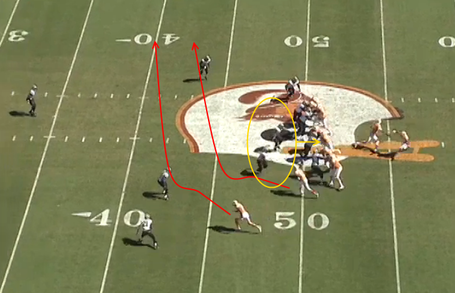 The Saints' linebackers bite like crazy, and Freeman will be able to hit the underneath crossing route fairly comfortably. But that would be a short gain and this is a shot play -- so what's going to happen here? Let's find out. 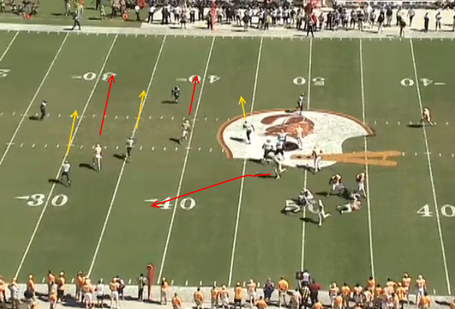 Vincent Jackson and Mike Williams draw all of the coverage. That's not hyperbole: every little bit of coverage goes with them, leaving a wide open bit of field to the right. The Bucs do something really smart here: they had Luke Stocker block with the offensive line at the start - and then after a few seconds had him leak out. That's fairly risky: if the offensive line lets someone through, Freeman could be under pressure quickly and this play would have no way to develop. But as it is, it works like a charm. 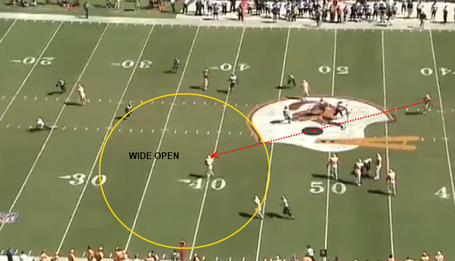 Wide open. Freeman's easiest completion on the day, by a mile. And an incredibly easy 33-yard gain. Yet it was a really interesting play design -- and the kind of creativity I hope we'll see more of.