How did the Bucs defense fail? Numerous coverage breakdowns gave the Saints easy yards and points, and we go through the game film to explain a few of these failures.

The Tampa Bay Buccaneers defense failed on Sunday, especially during the first half. Allowing Drew Brees to throw for 313 yards and four touchdowns in just a single half is a spectacular failure -- so what caused that? Did the Bucs just get outplayed by better players, or did they mess up? Mostly, it was the latter. While Brees made some outstanding throws into tight windows and Lance Moore beat single coverage time and again, the Bucs could have easily stopped Brees - had they not gone through some spectacular coverage breakdowns. Let's go through a few of them.

Wait, this was a failure? A five-yard pass? Yes, because sometimes the result is good even though the process was bad. Let me explain: 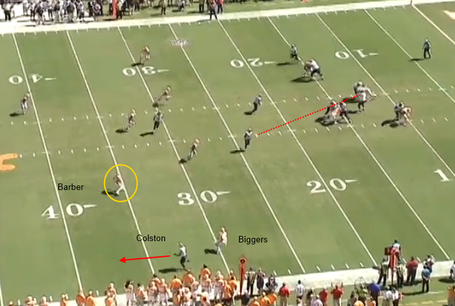 Click the picture for a better view. The red dotted line from Drew Brees shows where he's looking, and where he will throw half a second later. Biggers, noted at the bottom, will come down and tackle Henderson for a five-yard gain. That's mostly a success. There's just one problem: Marques Colston is wide open and could have gotten an 80-yard touchdown here.

Why? Because Barber fails to maintain his depth, and bites on where Brees is looking. This is a Cover 2 zone look, and Biggers is right to jump down to Henderson in this coverage. Unfortunately, Barber is not right in jumping down himself. If Brees just looks up a little and throws the deep ball, this is a touchdown - all because Barber didn't maintain his depth. It's easy to contrast this with Mark Barron on the other side, who's five yards deeper than Barber. That's the depth Barber should have, but as it is, there's no way he could catch Colston streaking down the sideline.

One mitigating factor: Gerald McCoy has just beaten Jahri Evans and is about to clobber Drew Brees if he doesn't get rid of it quickly, so there's at least some reason for Barber to jump down. 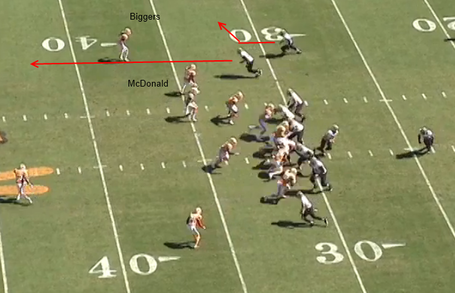 This is a fairly easy concept the Saints are running. They're going to stretch the coverage one the right by having one player run a short route into the flat, and another running a go route. This forces the players in zone coverage to communicate who has which player, and against certain coverages one of the two players will always be open. Fortunately for Tampa Bay, the Buccaneers have this one covered: E.J. Biggers and Brandon McDonald are in position to stop the route: one of the two will take the short route, while the other one will run with the go route by Devery Henderson. Unfortunately, this happens: 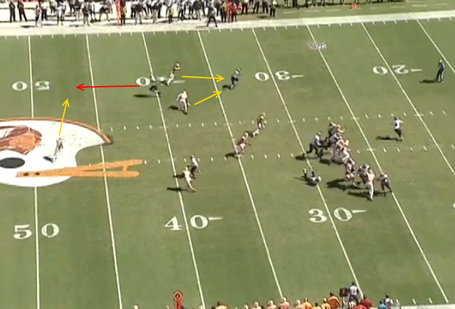 Yep, both Biggers and McDonald jump Sproles in the short route, leaving Colston going down the sideline on a streak. Barber recognizes and tries to compensate, but he won't be fast enough to get there in time. The result: 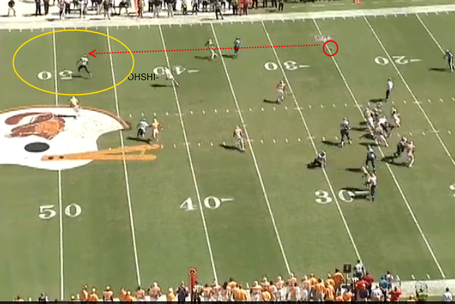 "OHSHI-" is about what Brandon McDonald has to be thinking there, as he realizes he just messed up. This is a classic case of miscommunication: two quarterbacks aren't clear on who's covering who, and the result is a blown coverage and a wide open player down the sideline. This set up the Saints' first touchdown.

The next picture will show you a standard setup for a screen pass: Darren Sproles sets a few yards behind two receivers facing cornerbacks in press position. The receivers should be able to block the cornerbacks, and Sproles can then take a screen pass deep into the secondary. 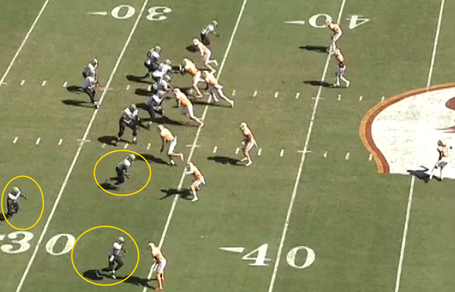 Except - that's not what's going to happen. Eric Wright guards Devery Henderson to the bottom of the screen, and Henderson is going to set up like he's blocking Wright, and then take off down the sideline. 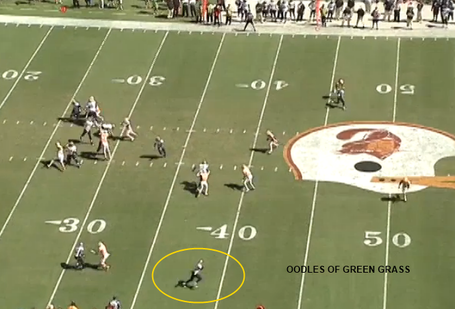 Boom, easy 30-yard gain. I'm not sure why Wright jumped down here. It's possible that this was a zone coverage concept, his responsibility was Sproles and someone else messed up behind him - because there's no one to go with Henderson. It's possible that all of this said 'screen' to Wright, and he decided to jump down on his own - but the fact that he stares at Brees and doesn't react when Brees doesn't even look at Sproles would suggest otherwise. Finally, it could well be that he thinks it's one kind of coverage while it was really another - who knows? Fact is, the Bucs left a completely uncovered Devery Henderson in the secondary. That's a recipe for disaster.

Play-action passes also really hurt the Buccaneers. That's a logical consequence of the focus on stopping the run: linebackers jump down quickly, and can't get back into position to stop a pass play. That's deadly with a quarterback like Drew Brees. Here's one example. 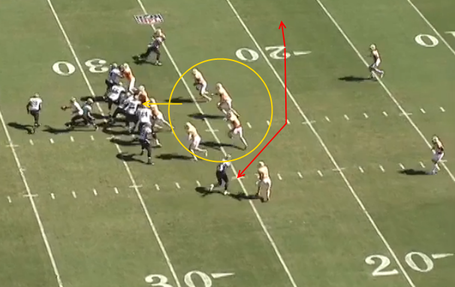 The linebackers react to Drew Brees' play-fake and the movement of the offensive line, which makes the play look like an outside zone run. Instead, Marques Colston is going to run a deep crosser behind the linebackers, hoping to create enough space for a big pass play. I kind of messed up the arrow there, in case you hadn't noticed, but it should still be clear what's happening. 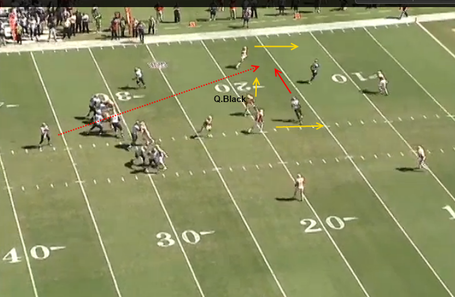 Part of the problem here is that Quincy Black doesn't get a lot of width in his drop. I don't know if he's supposed to drop to that spot, but because he lands really close to Mason Foster (who is dropping to the deep middle of the field), he can't get enough width to stop the pass to Marques Colston. Of course, that's also a result of the fact that they all bit on the play-fake. This was an easy 17-yard completion, setting up the later touchdown.

This is the end of the second quarter. With just 21 seconds left, the linebackers are going to bite heavily on a play-action fake. That's pretty much inexcusable, as the Saints are simply not going to run the ball here. Even if they are, it doesn't matter if they get a ten-yard gain: they're already in field goal range. This is a lack of situational awareness: you need to know to ignore the play-action fake here. One mitigating factor: the Saints' offensive line actually pulls a guard as if they're run-blocking. Impressive. 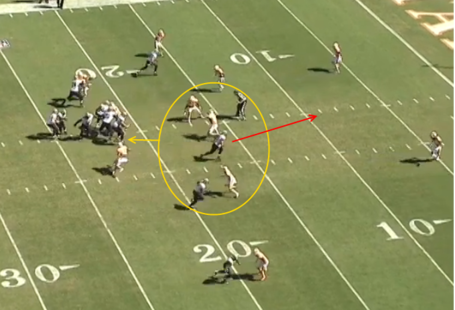 The problem up there should already be obvious. The Bucs are running Cover 2, which means there's a void in between the two safeties. Usually this is solved by having a linebacker run to the deep middle: that's a Tampa 2 defense. Unfortunately, all of the linebackers bite down, and David Thomas is going to have an easy touchdown in between the safeties, who have no shot to catch him: 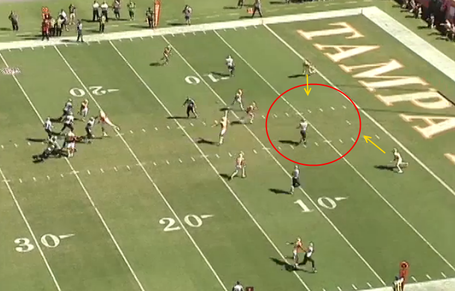 Easy touchdown, and the Bucs trail 28-21 thanks to numerous breakdowns in coverage.

The Bucs had a very good shot at beating Drew Brees and the Saints, but they made it too hard on themselves by giving New Orleans trivially easy big plays. Coverage breakdowns were everywhere in the first half, and you can't win if you play like that.

The good news is that the Bucs did much better in the second half, remaining disciplined in coverage and limiting Drew Brees to just 64 yards. But these coverage breakdowns have to be cleared up. Brees isn't the only one who can take advantage of these humongous voids, and the defense will continue to get torched through the air if this isn't stopped.