The Tampa Bay Buccaneers lost 35-28 in a devastating game to the division rival New Orleans Saints. The Bucs drop to 2-4 and are losing their chance to compete for a playoff spot this year.

The Bucs wore their throwback creamsicle uniforms for the home crowd, and their performance certainly was a throwback to some of those early Buccaneers teams. Defensive incompetence ruled the day, and Tampa Bay was sometimes comical in their loss.

Coming into the game, the Tampa Bay Buccaneers sported quite possibly the best run defense in the NFL, but a pass defense that had been inconsistent at best, and was shredded by Eli Manning and Cam Newton earlier in the season. Not surprisingly, it was that pass defense that would break up the Bucs in a shootout.

Yet early on, the Buccaneers came out smelling like roses. A Ronde Barber interception and Tiquan Underwood touchdown gave the Bucs an early lead, and touchdowns on their next two offensive drives extended that to a 21-7 lead early in the first quarter. Doug Martin and Josh Freeman shredded a terrible New Orleans defense that didn't look like it could stop anyone. 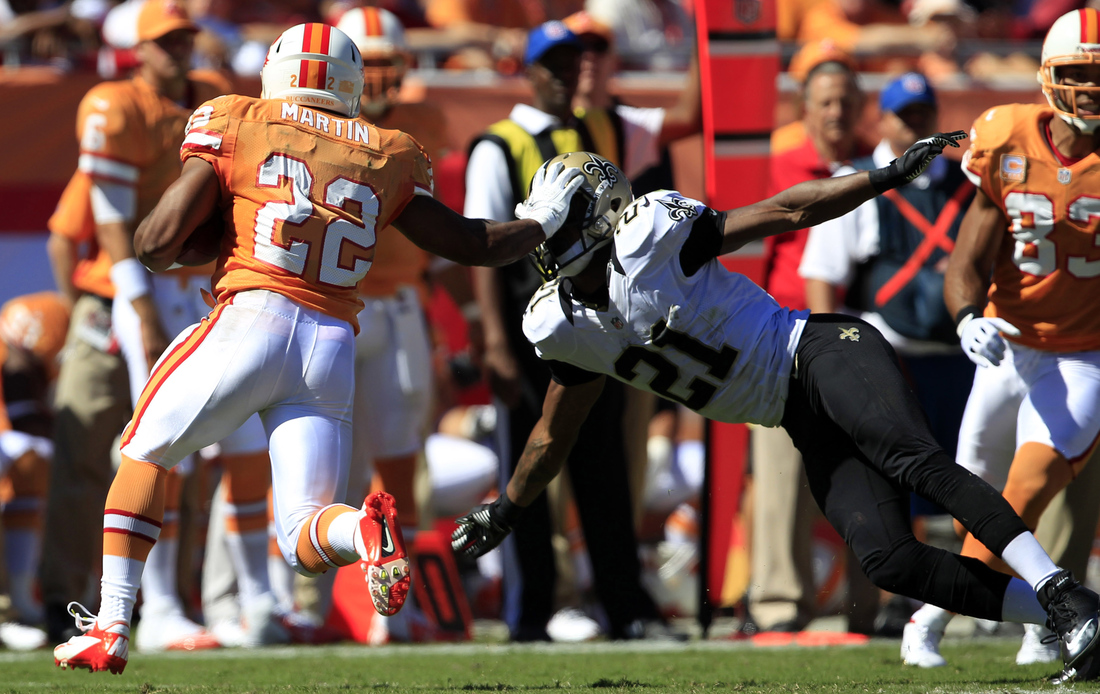 And then, suddenly, things changed. Brees had driven the Saints down the field earlier, but now he went off on a ridiculous streak as the New Orleans Saints scored 28 unanswered points. Touchdowns to Darren Sproles, to Joseph Morgan (flipping Eric Wright over his head), to David Thomas and, finally, one for Pierre Thomas followed.

That coincided with a streak of incompetence on offense for the Buccaneers, with the highlight being a 95-yard pass to Vincent Jackson - followed by four failures on the goal-line, turning those 95 yards into nothing. A 21-7 lead turned into a 35-21 deficit, and the Bucs had dug themselves a nice, big hole. 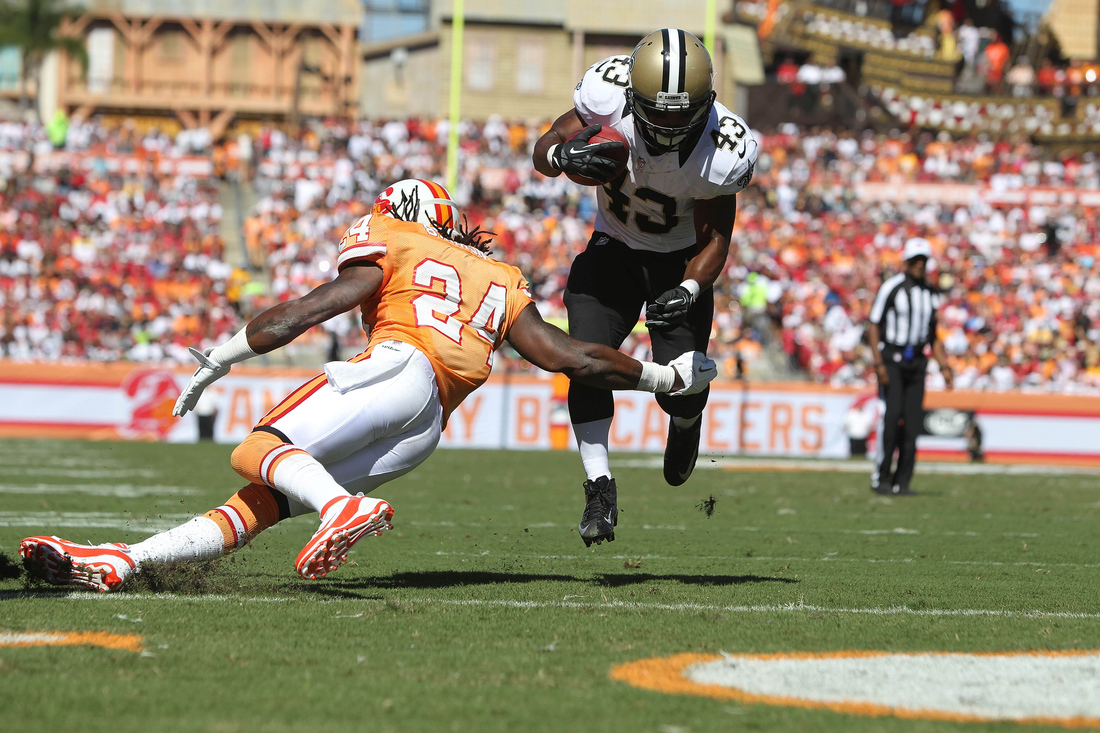 Yet the offense continued to fire, giving the Bucs a chance to come back. Josh Freeman once again had a productive game, throwing for a career-high 420 yards, adding three touchdowns and no interceptions. Vincent Jackson was the main beneficiary of Freeman's career day, catching seven passes for a ridiculous 216 yards and one touchdown.

As the defense came back alive in the second half and the offense got going again, the Buccaneers nearly tied the game. A late touchdown drive, capped off by a Dallas Clark touchdown gave them a chance and on the very final drive of the game, Tampa Bay had the ball at the Saints' four-yard line. A pass to Vincent Jackson looked to tie the game - but the big wide receiver was called out of bounds. And on the very final play of the game, with just five seconds to go, Mike Williams appeared to catch a touchdown - but was called for illegal touching, ending the game. 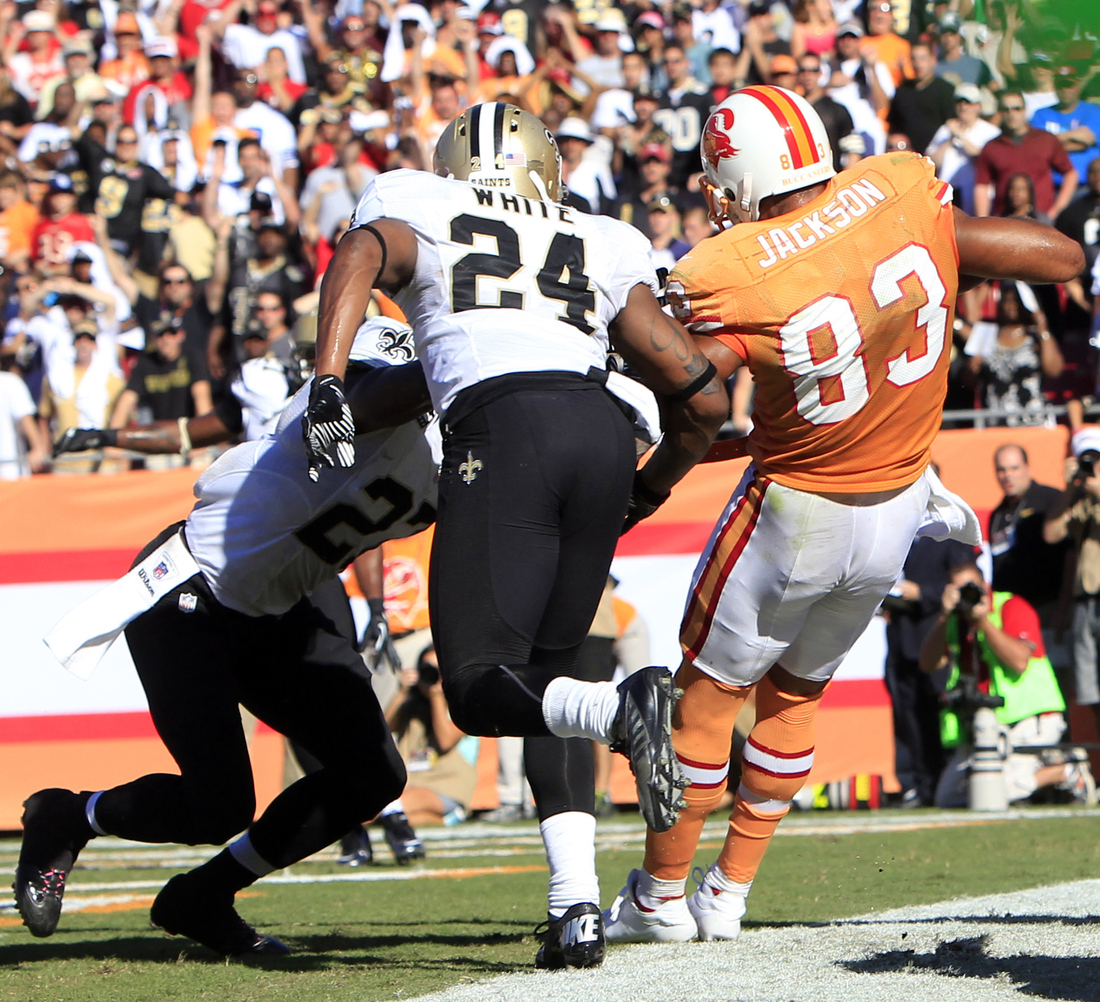 All of that wouldn't have mattered, had the Buccaneers not given the game away in the second quarter. At the half, Drew Brees had completed 20 of 25 passes for 313 yards, four touchdowns and one interception. It's tough to overcome the Saints (or any team) when a quarterback does that over a full game, but when he does that in a single half, well, it becomes nearly impossible.

Even a Tampa Bay Bay offense that produced an amazing 513 yards and didn't turn over the ball wasn't productive enough to win this game. Offensive miscues contributed to the loss - but the secondary should bear the brunt of the blame. This is now the fourth close game the Tampa Bay Buccaneers have lost. The good news is that they continue to keep each and every game close. The bad news is, of course, that they continue to lose those games.

The Bucs now move on to play the Minnesota Vikings on Thursday in an effort to get back into the playoff hunt. On a short week and on the road, Tampa Bay will have to find a way to win in Minnesota if they want to keep their playoff hopes (or what's left of them) alive.