Facing the league's leading rusher, Tampa Bay did not let up in run defense. The Chiefs managed just 80 yards on the ground on 30 attempts, for a pitiful 2.7 yards per attempt. The Bucs limited Jamaal Charles to just 40 rushing yards. Charles was running for 110 yards per game prior to facing Tampa Bay. While Roy Miller, Michael Bennett and Gerald McCoy were instrumental in limiting Charles' running room, Lavonte David and Mark Barron were free to roam and get Charles down. They didn't disappoint, as both players racked up eight tackles and they combined for three tackles for loss. The Bucs had five tackles for loss during the game. 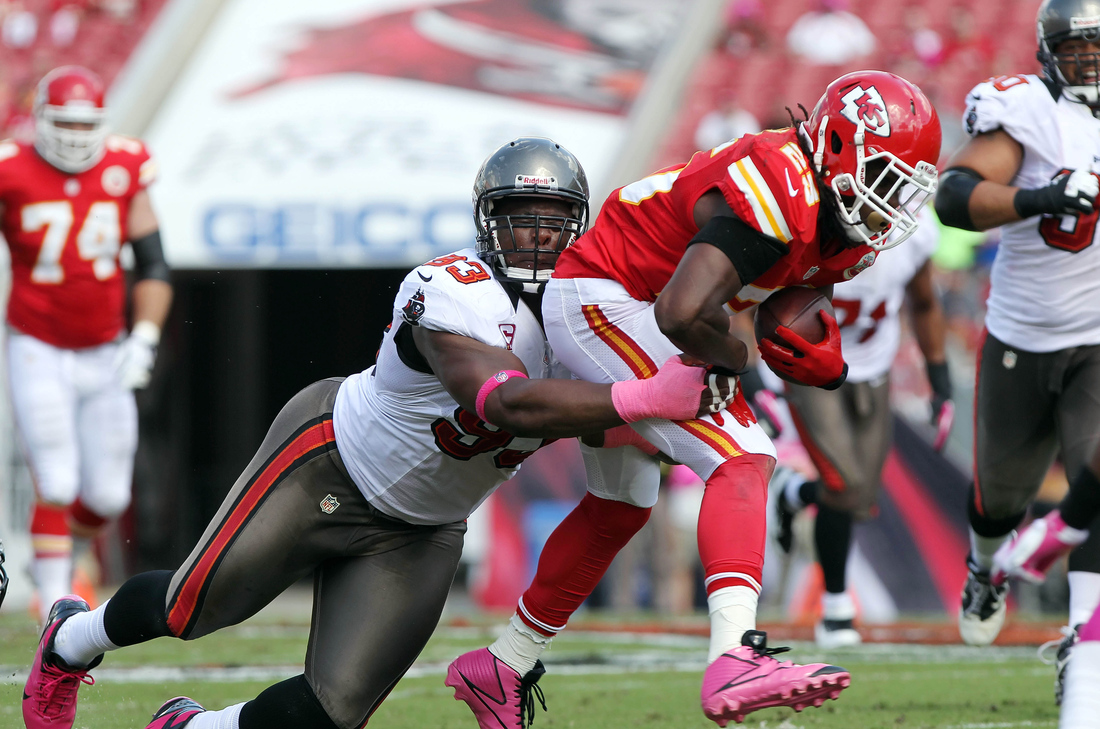 As the defense stopped Kansas City's run defense, they gave the passing game a chance to dissect the opposing secondary. Josh Freeman and company did not disappoint, despite an early and unnecessary interception. Freeman gave his receivers a chance to make contested catches, and they rewarded his faith with a multitude of spectacular plays.

Mike Williams was especially impressive, as the third-year wide receiver regularly outfought Kansas City cornerback Stanford Routt for the football. With four catches for 113 yards and a touchdown, Williams had his second consecutive 100-yard game and he sparked the offense with a 62-yard touchdown catch-and-run in the first quarter. Having inserted Jamon Meredith at right guard in place of Ted Larsen, the Bucs offensive line looked outstanding, giving up just one sack and no other quarterback hits.

Josh Freeman looked more comfortable than he did in previous weeks, although he was still plagued by a few inaccurate passes early on. As the game wore on, Freeman improved and he ended the day 15/26 for 328 yards, three touchdowns and one interception. That was his fourth 300-yard game, and his 12.6 yards per attempt marked a career high. 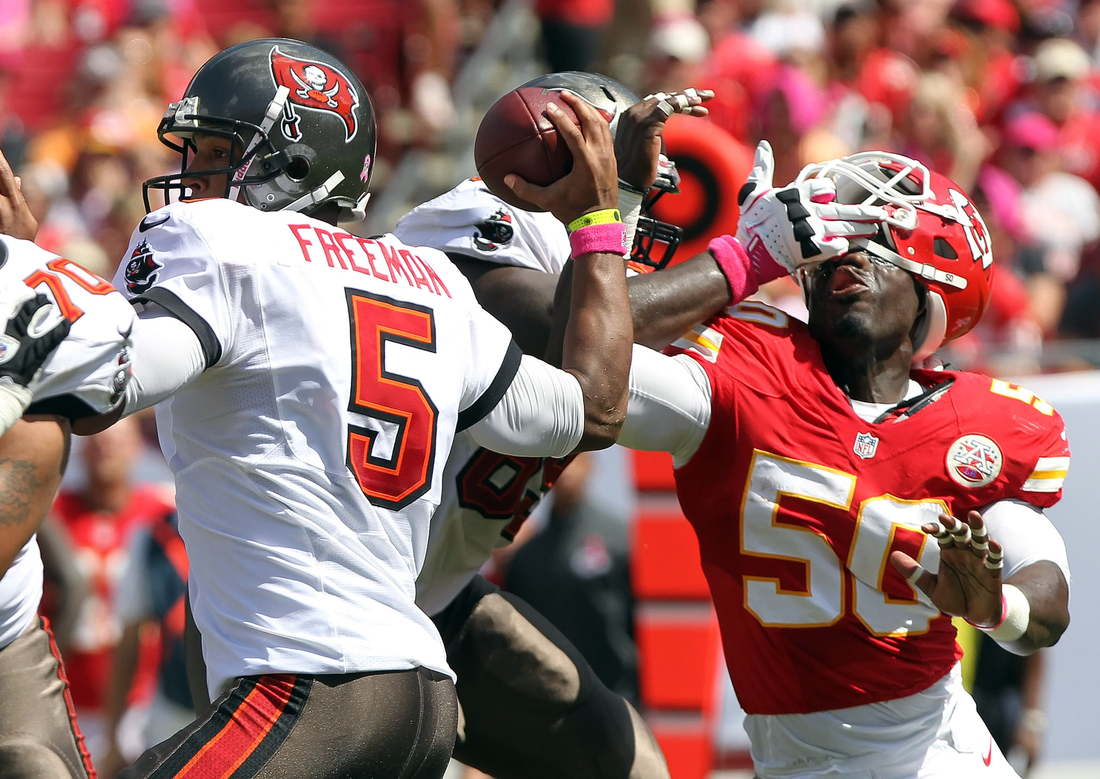 Despite the Tampa Bay dominance, there were moments where the Chiefs appeared to get the better of the Bucs. A blocked punt early in the first quarter gave the Buccaneers outstanding field position, but an ugly Josh Freeman interception gave the advantage right back. Mark Barron quickly stepped in to set that right, however, as he picked off a tipped pass inside the red zone keeping the game tied. Just one play later, the Bucs would lead 7-0.

That interception was Barron's first in the NFL, and it fit the quality of his play in this game. Barron was physical and ever-present, especially in run defense, and he led a punishing defense to a quality win, as the Bucs defense gave up just 3 points all game. 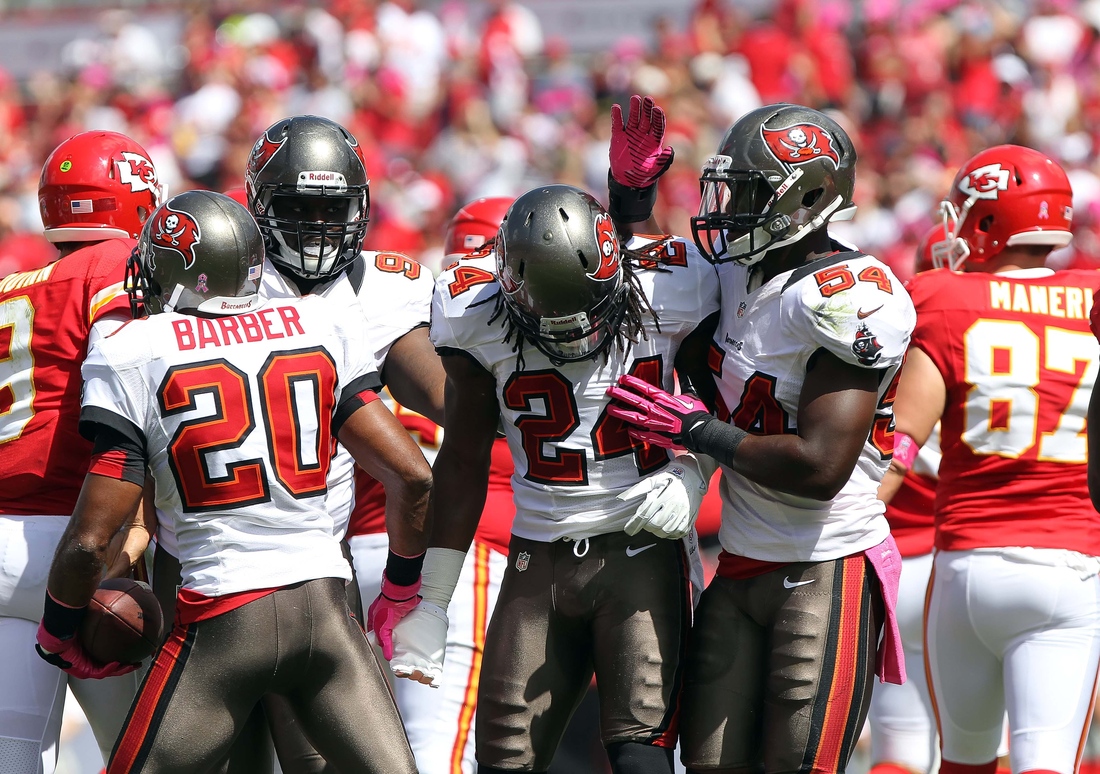 While the Buccaneers built their lead, they appeared to slow down at the end of the third quarter, choosing to run the ball and go with conservative short passes on third downs. That would come back to bite them, as a Michael Koenen punt was blocked and in true Garo Yepremian fashion, he threw a pick-six trying to correct the mistake.

Yet those negatives can't outshine the positives, and there were plenty of those. The Buccaneers came out firing in the second half, going 80 yards in just four plays, including a 42-yard Doug Martin reception. Vincent Jackson quickly capped that drive off with a 19-yard touchdown reception, giving the Bucs a 14-3 lead.

That wasn't enough for them, as Ronde Barber prevented the Chiefs from scoring in the red zone, in one of the most amazing plays of his career. Brady Quinn tried to squeeze a ball into tight coverage, but E.J. Biggers batted the ball away, kept it off the ground with his arm, and Ronde Barber then picked it out of the air to return it 77 yards for the touchdown. That was his 13th career touchdown, and his 12th career defensive touchdown. Barber has been up and down as a free safety this year, but he still knows how to make the big play. A 21-3 lead seemed safe, although Michael Koenen's Yepremian impression made it appear close for a while. 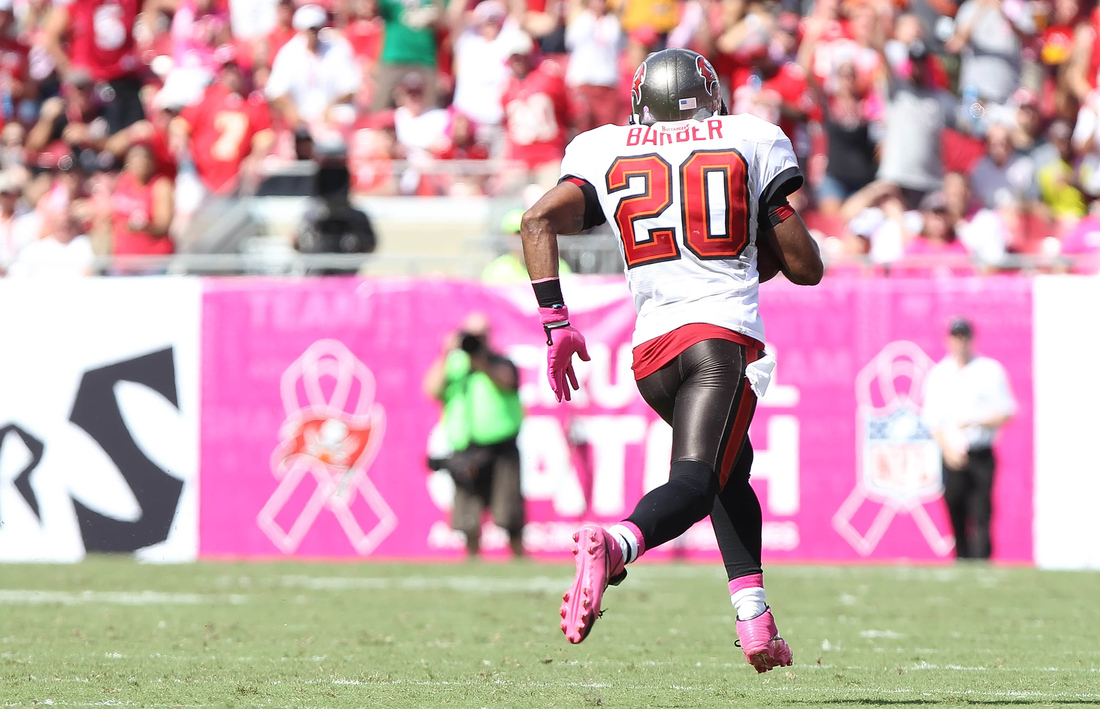 From there, the running game took over. Doug Martin and Legarrette Blount had combined for just 6 carries during the first half and barely featured in the game plan. But when the Bucs had a comfortable lead, those two were allowed to close out the game as they finished the game with 20 combined carries for 134 yards.

Martin had an especially impressive game, with 13 carries for 76 yards and 2 more catches for 55 yards. His running set up Vincent Jackson's second touchdown reception on the team's penultimate drive. Tiquan Underwood got in on the fun, too, with a 62-yard reception to set up a field goal. But Legarrette Blount got the rock on the final drive, as the Bucs pounded the Kansas City into the ground, with Blount adding a touchdown of his own to cap off the game with a 38-10 score.

This was a complete victory: run defense was stifling, pass defense produced turnovers, the passing offense produced big play after play and the running game closed out the game. The Bucs looked dominant today, although the Kansas City Chiefs did not put up much of a fight.

This leaves the Bucs at 2-3 after five games, in second place in the NFC South but a mile removed from possible playoff contention. So far, Tampa Bay must be content with improvement week after week. Perhaps this blowout win is a sign of things to come.