The Tampa Bay Buccaneers buried themselves with blitzes on Sunday, and lost the game. But how and why did those blitzes break down? Follow us as we go through two key blitzes that helped lose Tampa Bay a costly matchup.

For the second time this season, the Tampa Bay Buccaneers blitzed their way out of a win in the fourth quarter. Against the New York Giants and the Washington Redskins both, the Bucs just needed a stop at the end to win the game. Yet on both occasions, the quarterbacks sliced up a defense that went after them with ineffective blitzing, leaving gaping holes in the secondary to be exploited. So how, and why did this happen? I'll break down the two key plays on Robert Griffin III's final game winning drive, and show you what went wrong - and how the Bucs can fix it.

I can't explain this play in any rational way, except to say "someone messed up here". Not defensive coordinator Bill Sheridan, or at least not in the design of this play, because this play was not executed to its design. That's the feeling I get watching this play, and it was more or less confirmed by Greg Schiano today as he noted that "execution" was the problem with the blitzes. Let me show you how: 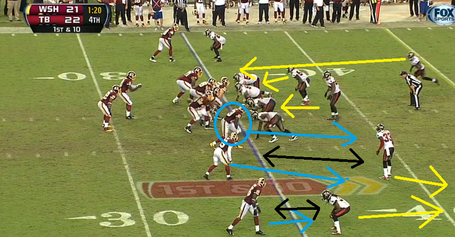 Excuse my amateurish MS Paint skills, but I'm not an artist. This is the best I can do, but it should be clear. We have four defensive linemen, all of whom rush the passer, and we have three blitzers: two linebackers and safety Ronde Barber. On the bottom you see that Brandon McDonald and E.J. Biggers are in man coverage on receivers, and will bail, leaving that area of the field open underneath.

The Redskins are going to execute a simple play, a hot route. Fred Davis, circled in blue, will simply run up in response to the blitz he's seeing, turn around and catch a pass - and have nothing but green grass in front of him. This is a standard tactic against the blitz, and one the Bucs are familiar with. It's not rocket science. Yet it produced a massive 20-yard gain for one simple reason: someone messed up.

No one, and I truly mean no one, designs a play leaving any player uncovered in a two-minute situation with 20 yards of open grass in front of him. Either someone was supposed to drop to that area, or a safety was supposed to be playing closer to the line. The latter option is unlikely, given the fact that Ronde Barber blitzed on this play, and that would leave Mark Barron as a single high safety. So who messed up then? My best guess, and I have to emphasize that this is a guess, would be one of the linebackers.

You see, the Bucs are playing man-to-man on this play. Everyone has a man - but Fred Davis is unaccounted for. Now, it's possible Mark Barron is supposed to guard Fred Davis, but then the Bucs would have no safety and they'd be executing a Cover 0 blitz - pure madness in a two-minute situation. More likely, someone else had Davis. Foster hesitates a little before blitzing and appears to key in on the running back, who's staying in to pass protect. Since no one keys on the running back, it seems likely that Foster was following his responsibilities, so we can eliminate him.

That leaves three realistic players as the possible culprits: Michael Bennett, Lavonte David and Ronde Barber. The Bucs could have asked Bennett at left defensive end to drop into coverage on Davis - he has the athleticism to do so and is in position over the tight end to do that. Lavonte David has frequently been asked to cover tight ends as well, although his presence on the other side of the formation makes it unlikely that that's his responsibility. Finally, it's not impossible that Barber should have been guarding the tight end, but messed up on coming on a really late blitz that had little chance of getting there.

Ultimately it doesn't matter who was the culprit on this play, but the people blaming the design of the blitz for leaving Davis wide open are misguided. No coach draws up a man coverage play leaving a tight end in the middle of the field completely unaccounted for. That means one of the players failed to execute his responsibility, and you can see the result below: green green grass and no coverage for Fred Davis.

Two plays later, the Bucs have the Redskins at 2nd-and-6 just outside field goal range and desperately need to get a stop here. Instead, this is what we get.

This time, the design of the blitz is completely at fault. Michael Bennett even acknowledged this to the Tampa Bay Times:

"You run a blitz and it was just wide open," defensive end Michael Bennett said of RG3's run. "I knew myself. I was like, 'I don't know if I should run this play or not, but I did my job.' I knew he was going to get outside. That's what he does. The edge was too short. The whole defensive line slanted."

And, well, that's what happened:

It's interesting to note that in this occasion, Mason Foster was actually in man coverage on Fred Davis - does that say something about the previous play? Regardless, it's really easier: the entire line slants to the (defensive) right, the blitzers go to the right, and everyone on the defensive left runs in man coverage with receivers and tight ends. Since those players are going to go far down the field, that leaves a lot of green grass underneath.

Now, there's no route being run in that area, but Griffin is going to take advantage for one simple reason: no one has edge contain, because no one's being asked to contain. He can easily break the pocket and pick up 15 yards before Mason Foster gets a chance to smack him because for some reason, he doesn't slide. This play was all on the design of the blitz, as indicated by Michael Bennett's quote, and not on the execution.

We've got two failed blitzes, but they failed for different reasons. One of them was a breakdown of scheme against the wrong player: a mobile, fast quarterback who can break the pocket and run for yardage. The other was an individual breakdown, where someone did not pick up his man. We can't possibly know who messed up on that play, but it's good to keep that in mind: players mess up plays and can make play-calls seem worse than they really are.