Five Questions with Football Outsiders on the Tampa Bay Buccaneers

Share All sharing options for: Five Questions with Football Outsiders on the Tampa Bay Buccaneers

Football Outsiders has released their annual Almanac. This is one big tome, analyzing and previewing the entire NFL and providing a lot of interesting statistical nuggets. It is a must-read every year, and it's no different this year.

Football Outsiders' Doug Farrar was kind enough to answer some questions on the chapter in the book about the Tampa Bay Buccaneers. Hit the jump to read his comments.

You can buy the Football Outsiders Almanac in PDF form here and in printed book form here. 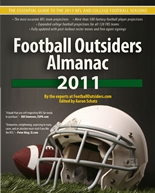 Bucs Nation: Last year, the Football Outsiders Almanac was relatively high on the Tampa Bay Buccaneers, projecting 8 wins for a team that had gone 3-13 the year before and looked like a mess. The Bucs surpassed even that number and went 10-6. Despite that, this year's Almanac projects the Bucs to slump and produce just 7.5 wins, despite a schedule that isn't significantly tougher, many players returning from injury and youthful players who should develop. Can you explain why the Almanac projects the Bucs to take a step back despite an apparently rosy future?

Doug Farrar: Part of the issue is the simple fact that this team went from 3-13 to 10-6 in one season – we are generally going to have a mean projection somewhere in the middle in cases like that unless there are outlier indicators that take things in another direction. The projection for Josh Freeman is based in part on the fact that his touchdown-to-interception ratio isn’t historically repeatable, though Donovan McNabb would be the first to tell you otherwise, and I think he’ll be just fine in that regard. Williams’and Blount’s rookie performances may be one-offs to a degree – we just don’t know yet.

While did hold firm with many of their stars from a contractual perspective, they didn’t bowl anyone over with additions. The line looks to be the focus of the defense, and it could be anything from transcendent to injury-riddled. Add in the fact that the NFC South sets up to be a ridiculous challenge, and there are issues. I think the Bucs are a very talented team, but there are things they’re going to have to do to get past to beat our math, so to speak.

Bucs Nation: The chapter on the Bucs focuses on the idea that the front office manages to find premium talent on the cheap by taking risks on players with some history with character problems, most notably Mike Williams and LeGarrette Blount. This draws some obvious comparison with the Cincinnati Bengals. Can you explain whether (and why) Bucs fans should be concerned with this trend?

Doug Farrar: Well, the first and most obvious trend to be worried about is the fact that ’s two primary offensive weapons missed serious time in college due to different types of violations. Blount was having trouble maintaining weight and making practices even before the incident in the game, and as much as Williams was a godsend to this offense last year, one still has to contend with the fact that he quit on his team at after losing a whole season before that. We may never see any trouble from either of those guys again, but those players were each trying to prove a lot in their rookie years. We’ll see what happens when things are a bit more sure for them.

Add in all the off-season issues from the roster to the ticket office, and I tend to wonder who’s in charge of that team. Raheem Morris is an excellent motivator, and Mark Dominik knows his personnel, but teams need pillars of discipline and respect when dealing with so many mercurial personalities. That can come from the front office, the coaching staff, or from veterans on the team. I’m just not sure where that comes from on this team in ’s case.

Bucs Nation: One split that really stood out to me was the split by downs on offense. The Bucs were mediocre on first and second down with a DVOA of 4.1% and 0.8% respectively, but they had an incredibly high 40.3% DVOA on third down, which ranked second in the league. Can you explain that split, and what does this split mean for the offense's performance in the future?

Doug Farrar:I would actually expect their DVOA to tick up on first down, if only because Blount was so much better on that down than Cadillac Williams was – Williams saved his best for third down, and Blount sort of went the other way. So, it should even out from that perspective. On the passing side, Freeman was very consistent on first and second down – 14.9% DVOA and 14.1% DVOA, respectively – and he just shot through the roof to a 35.7% DVOA on third down. As with his touchdown/interception numbers, we’re not sure he’ll quite hit those gaudy heights again, but the indicators are pretty solid.

Bucs Nation: The Bucs had another big split on defense: they were the 28th ranked defense before halftime with a DVOA of 17.2% but rose to -4.7% DVOA after halftime, which ranked 11th in the NFL. Is there any way the data explains that split, or is it simply a case of playing well at some points and poorly at others? And what does split mean for the future of the defense?

Doug Farrar: It’s more playing well at certain times, though it could be explained by certain schematic changes. We don’t generally look at first-half/second-half performance as a future indictor of anything because the data can be pretty random and the reasons inconclusive, but one positive thing to look at is that the Bucs ranked 13th in Late and Close situations, which was obviously reflective of their penchant for comebacks.

Bucs Nation: It seems Football Outsiders remains unconvinced the Bucs' offensive line is going to be any good, despite the massive amounts of money the team has thrown at the problem. The Bucs have at least settled on one group of linemen they're committed to in the longer term. Do you see the line's performance improving in the future, or is what we have seen before what we are going to get?

Doug Farrar: While I’m very confident in the performance of Davin Joseph when he’s healthy, I have serious concerns about both tackle positions. I went back and watched a lot of tape on Donald Penn when writing the Bucs chapter in the book, and he’s a decent pass protector at best. The only reason he didn’t give up more sacks in 2010 was that ’s passing offense was such a roll-right proposition. We had him credited with three blown blocks leading to sacks, but it’s a bit worrisome how often he was beaten by speed ends when Freeman was running to the right.

Of course, with all that right-side movement, it’s important that the right tackle be a consistent pass protector, and I can’t figure out why the Bucs re-signed Jeremy Trueblood after he lost his starting job in 2010 after he led the league in blown blocks on 2009. I like Jeremy Zuttah’s versatility, and I like him better at center than elsewhere, but most lines are led by their tackles (the Saints provide a notable exception), and I’m just not convinced the Bucs have what it takes at a Super Bowl level at those positions.