Raheem Morris is very creative and pretty effective in his coverage schemes. He will call anything and everything in an attempt to confuse quarterbacks and play to the strengths of his players. So today, I thought I'd pick out a play to illustrate how creative Morris gets with his coverage schemes. Larry Asante's interception of Drew Brees in Week 17 of the regular season happened with a very unorthodox coverage scheme, and that's a good example of the type of variation Morris uses in his schemes.

Right from the personnel grouping and the pre-snap alignment you can tell that this is an unconventional coverage. The Saints are down 10-7 with 52 seconds left in the second quarter. They have 3rd&10 at the Bucs' 25-yard line, so they're looking to score and the Bucs have to get a stop here. Hit the jump to see what's up. 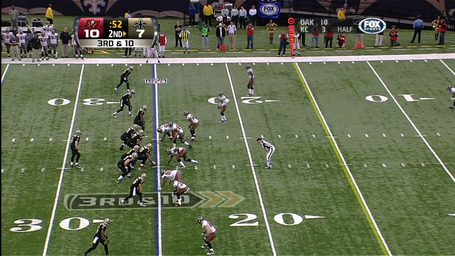 The Saints have 11 personnel in the game: 1 running back, 1 tight end and 3 receivers. 2 of the receivers are to the left of the formation, with the tight end flexed out to that side. To the right, Lance Moore is in the slot and Reggie Bush is split out wide.

With Aqib Talib on IR and E.J. Biggers injured during the game, the Bucs respond to this personnel grouping with 3 down linemen, 2 linebackers, 3 cornerbacks and 3 safeties. The only players not aligned as coverage players are the three down linemen and LB Dekoda Watson, who is showing blitz over the left guard.

The Bucs have Ronde Barber in the slot to the left on Adrian Arrington, Myron Lewis on Devery Henderson and, regrettably, Elbert Mack on Lance Moore. It's more interesting what they've done with the tight end and Reggie Bush, though. Even though Reggie Bush is split out wide, they have Barrett Ruud aligned in a close alignment over him. Sean Jones is aligned in a press look over tight end Tory Humphrey. Larry Asante and Corey Lynch are the two deep safeties.

Let's go to the play itself

At the snap of the ball, the Bucs rush 3 linemen and drop out Dekoda Watson. Predictably, they get no pressure at all. Now, in coverage you're going to see Elbert Mack and Barrett Ruud take Lance Moore and Reggie Bush man-on-man. What's interesting here is that Ruud isn't used to drop to a zone, but runs with Bush. there aren't a lot of linebackers who would be asked to do that, although the safety help over the top helps the Bucs do this.

The left side of the screen is more interesting. There, the two cornerbacks both clearly drop to a zone, and read the quarterback. Myron Lewis squats on Henderson's short route, and Barber passes off Arrington to the deep safety, Corey Lynch. But they're not playing zone entirely to that side of the field, as Sean Jones has press-man coverage on the tight end. Dekoda Watson is dropping back to a zone in the middle of the field, leading to a double-team on the tight end. That seems a lot of overkill for the fourth tight end on the Saints' roster, but it's impossible to complete a ball his way at least.

The best matchup the Saints have versus this defense is Lance Moore man-on-man against Elbert Mack. Drew Brees identifies that, Lance Moore beats Elbert Mack inside and creates a tiny window, and Brees throws it accurately and on time. Don't let the result fool you: they had this coverage beat. The only reason this did not result in a first down was that Lance Moore was so effective at turning around Mack, they got their feet tangled and Moore fell down before he could make the catch.

Still, this is a really interesting play. There is a mix of zone, press-man and man coverage with safety help. You have a linebacker playing like a cornerback on the outside, which is not something you see often. Some of these decisions are odd, though. Having the worst corner in man coverage on the Saints' go-to third-down receiver is a bad proposition, although the Bucs don't have that much choice with Talib and Biggers both injured.

What this does show is Raheem's willingness to get creative with his scheme and to use different players in different ways. This is why any cornerback or defensive back can play for the Bucs: Raheem Morris will find a way to use him, and change his scheme to do so.