Freeman's year-to-year improvement was impossible to miss. Last season he was a bottom-ten quarterback with some potential. This year he turned into a top-ten quarterback with a very bright future. His numbers were astounding for a second-year quarterback, completing 291/474(61.4%) for 3451 yards, 25 touchdowns and 6 interceptions. He may have had the best season of any second-year player since Dan Marino, or at least since Peyton Manning and Daunte Culpepper. And he certainly had the best season of any 22-year-old quarterback in history.

But something that's lost in that narrative is Freeman's in-season improvement. In his second pre-season game he injured his thumb, and that bothered him noticeably. A lot of his passes sailed and were far less accurate than they were later on in the season. However, that injured thumb seemed to have healed after the week 4 bye, yet Freeman continued to improve. To see this improvement expressed in some spiffy graphs, hit the jump.

To see how Freeman improved I used 3 different stats: Y/A, ANY/A and DYAR. Y/A stands for Yards per Attempt and is exactly that: the number of Yards Freeman gained per Pass Attempt. It's a simple but effective formula, but it's also a bit crude: touchdowns and interceptions are treated as simple completions and incompletions, sacks are ignored and no weight is given to an opponent's performance. That's where ANY/A - or Adjusted Net Yards Per Attempt - comes in. This is Pro Football Reference's main statistic, and it takes Touchdowns, Interceptions, Sacks and Sack Yardage into account to come to a more complete view of a quarterback's performance. Of course, even that measure isn't adjusted for an opponent's quality, which is why I also looked at Football Outsiders' DYAR. DYAR is a catch-all metric that tries to express the value a player added in comparison to a replacement-level player. It takes into account everything a quarterback does, including runs, and is an accumulation stat. That means that the more a player does, the better he looks in DYAR (or worse, if he's playing at a below replacement level).

First up, Yards Per Attempt 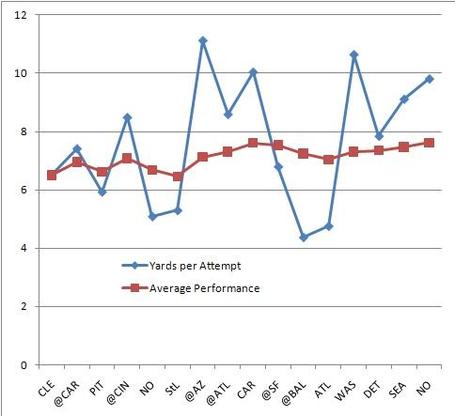 The Blue Line shows Freeman's game-to-game performance, while the red line shows what his average over the year looked like after each game. A few things stand out here: Yards per Attempt hates his first game against New Orleans and the game against the Rams, but it sees the Ravens and second Falcons game as clear low points. Despite the slump against Baltimore and Atlanta, the overall trend throughout the year is upwards. 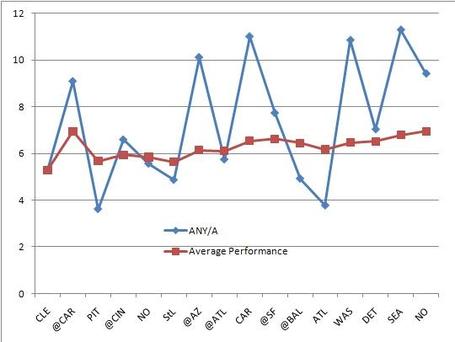 Adjusted Net Yards Per Attempt paints a different picture, though. Baltimore and Atlanta are again lowlights, but while Y/A showed the Steelers game to be mediocre, ANY/A seems to perceive it as his worst game of the year. The reason for that is easy: it's Freeman's only game without a touchdown, and one of only 5 games with an interception. 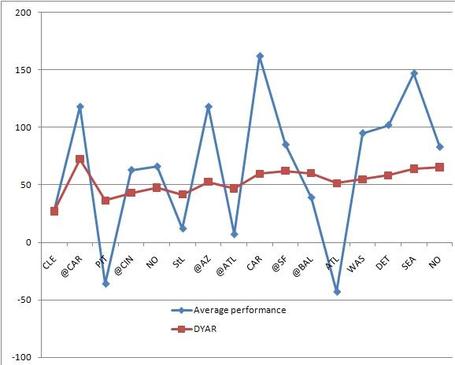 DYAR seems to agree with ANY/A on the Pittsburgh game. However, the early-season games are not or barely adjusted for opponents as there was little data on the opponents at that point. A more interesting point is that the Rams game now jumps out as a negative, and the first Falcons game does too. Both previous measures thought Freeman played decently in those games, but DYAR knocks Freeman heavily for those games. Still, the Steelers and second Falcons stand out as the real negatives.

So why did Freeman improve as the year progressed? Healing his thumb surely has something to do with it, but he also seemed to get better after it presumably had healed. It's likely Freeman learned to recognize coverages quicker and built chemistry with his young receivers throughout the year, and he likely learned a few things from each game. The young players around him got better throughout the year as well, but perhaps equally important was the gameplanning by the offensive staff. He plan of attack seemed to be a lot better at the end of the year than it was at the beginning of the year, although the emergence of Blount as a factor may have played into that as well.