Share All sharing options for: Could the Bucs move to a 3-4?

I'm moving this feature back up the front page because with Wade Phillips coming in for an interview on Friday, this has suddenly become very relevant again. This feature was written back in February so some of the information is a little out-dated in terms of the Bucs' personnel, but the general point still stands.

The Bucs introduced a new defense for passing downs, or nickel situations, this year: the 3-3-5. This means 3 defensive linemen, 3 linebackers, and 5 defensive backs are on the field. This scheme was ostensibly created to keep Quincy Black on the field, even though Black's impact wasn't that big. In the past the Bucs used to go to to a 4-2-5 set in nickel situations, taking the OLB not named 'Derrick Brooks' off the field in favor of an extra defensive back. In 2009 with Brooks gone, Quincy Black was the linebacker to come off the field. In fact, that's the standard around the league when faced with nickel situations: take off a linebacker, and put in a defensive back. Whether the team runs a 3-4, 4-3 or some hybrid, almost all of them do that. And when a 3-4 team removes a linebacker and brings on a defensive back, they end up with a 3-3-5 scheme, like the Bucs ran this year in nickel situations. So a very logical question follows from that: can the Bucs expend that package and go to running a 3-4 full time? The answer to that question is: it depends on what you think a 3-4 defense is. To answer the question properly, we're going to have to go into the different versions of the 3-4.

First, we need to be clear on what the Bucs run right now: a 1-gap 4-3. This means 4 down linemen, 3 linebackers, and everyone has his own 'gap'. In theory, if everyone fills his own gap, there's no room to run. Of course, one missed assignment, tackle or good block by an offensive lineman and there's some running room. I've inserted a quick diagram of a typical 4-3 defense, where you can see how every lineman has his own gap. The letters show a common method of referring to different gaps: the A-gap is the gap between the guard and the center, the B-gap is the gap between the guard and tackle, and the C-gap is the gap to the outside of the tackle.

So now that we know that, we can move on to the 3-4. There are essentially two different 3-4 schemes. One is what is generally called the Parcells scheme, after the former coach who ran it very succesfully throughout his career. He most famously ran this scheme with the Giants where Lawrence Taylor was able to shine as perhaps the best linebacker to ever play the game. This kind of 3-4 is very different from the 4-3 above, as it calls for the 3 down linemen to each guard two different gaps. This will ideally leave the linebackers free to make plays. The playmakers in this system are the linebackers, not the defensive linemen. The linemen set up the play and the linebackers finish it off. Hit the jump to see what this looks like.

This is from the week 1 Bengals-Patriots game. Belichick grew up as a coach under Bill Parcells, and he probably runs the purest form of the Parcells 3-4 in the NFL. As you can see, there are 3 defensive linemen and 4 linebackers. If you compare this to the diagram above you'll see that unlike a 4-3 there are no defensive linemen aligned outside the offensive tackle. Furthermore, the defensive linemen are all aligned more or less head-up over an offensive lineman, which would allow them to control that blocker and the two gaps to the side of him. The two linebackers on the end of the line act more or less as defensive linemen as well, but in pass-rushing situations you'll usually see the weakside linebacker rushing the passer with the strongside linebacker dropping into coverage to create a 4-man rush - that is, if they don't blitz, which happens frequently with some 3-4 schemes. Dick LeBeau is especially famous for his use of pressure from different positions while dropping out other players, all from this type of scheme. Rex and Rob Ryan also run similar schemes, all with their own twists. None of these schemes are exactly the same, but the key to all of them is that defensive linemen control two gaps and hold their ground, while the linebackers make plays. And this is where the Bucs personnel clashes with the system: the linemen the Bucs have all specialize in penetrating the line of scrimmage instead of holding their ground, and they don't have the type of impact linebacker that can be featured in this type of scheme. So this should answer the question, right? The Bucs won't move to a 3-4? Nope. Because there's another type of 3-4: the Phillips 3-4.

This scheme is named after Bum Phillips and his son Wade Phillips, who made it famous. This scheme has 3 defensive linemen and 4 linebackers, as the name implies, but it is more similar to a 4-3 scheme than a Parcells 3-4 scheme philosophically. The Phillips 3-4 is focused on penetrating the line of scrimmage instead of controlling each blocker. While the alignment looks nearly identical to that of a Parcells 3-4, its execution is very different. This difference is perhaps best seen in nickel situations, when the Phillips 3-4 changes to a 2-4-5, at least as it's run by the Cowboys. This plays essentially like a 4-2-5, the standard nickel package of 4-3 teams. You can clearly see this below. 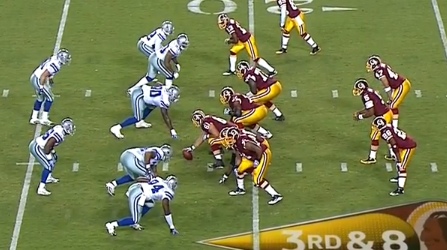 To run this scheme, you need at least one dominant interior lineman, preferably a nose tackle, and outside linebackers that can drop into coverage, play the run and rush the passer. The scheme can be molded to the specific talents of each player - for instance, Demarcus Ware is such a great pass rusher that he only rarely drops into coverage, and a dominant player like Bruce Smith can become the focus of the scheme at DE as well. But in general, the scheme is made for the outside linebackers and the nose tackle. And incidentally, I think this fits the Bucs to some extent. Gerald McCoy should have no problem playing nose tackle the way Ratliff plays the position, and McCoy in fact has already done so in the 3-3-5 package the Bucs run. Brian Price would be a great fit at either of the end positions, and it would allow both McCoy and Price to be on the field at the same time, while giving them some one-on-one matchups in pass-rush situations. But to run this scheme the Bucs would need at least one capable, pass-rushing linebacker. And they don't have that at this point, which is a key problem.

Ultimately I think it's unlikely the Bucs do switch to a 3-4 scheme, but the key to this may be the draft. If the Bucs cannot draft an impact defensive end in the first round, they will likely draft an impact outside linebacker with pass rush abiliities - like Justin Houston or Akeem Ayers. If they have that linebacker they will want to feature him within the scheme, and the Phillips 3-4 could be perfect for that.

As for the 3-3-5, I don't think it's here to stay either. The problem this year was that we really didn't have effective and consistent pass rushers, and Morris countered that by blitzing and basically giving up the pass rush with a 3-man rush. The blitzes never really worked, so the 3-3-5 took over as the dominant defense in passing situations. When the Bucs are capable of getting a pass rush with 4 down linemen again, I think we will see the 3-3-5 largely disappear.