A Tale of 4 Sacks

Share All sharing options for: A Tale of 4 Sacks

The Buccaneers had 4 sacks against the Panthers, 2 from Tim Crowder, one from Stylez G White and one from Quincy Black. After being held without a sack in the first game, but still getting a lot of pressure, the Bucs made this game count and got to the opposing quarterback. Hopefully we'll see more of that as the season continues, and as our young Defensive Linemen gain experience and learn how to play better at the NFL level.

But aside from physical domination, there's another way to get sacks in the NFL and that's scheme: with creative blitzes and pass-rush games the defense can find an easy way to the quarterback. So how did the sacks against the Panthers happen, was it domination or was it scheme?

Let's start with the first sack. With 2:30 left in the second quarter; the Panthers are facing 3rd&8 at the Bucs 36-yard line. With just a 4-man rush, Kyle Moore at DT gets double teamed inside, Gerald McCoy is trying to beat a guard, while Crowder and White both get single matchups on the offensive tackles. While McCoy and Moore fail to do much against the interior linemen, both Crowder and White win their matchups easily and are on top of Moore as soon as he finishes his drop. Crowder gets to the QB on a bull rush, while Stylez turns the corner around Jordan Gross. More impressively, Gross is clearly holding him on the play, but Stylez keeps his legs churning and gets to Moore anyway. If you want to watch the play, you can do so here.

The second sack was a lot less impressive. On 3rd&3 at the Panthers 36-yard line Matt Moore rolls out behind his blockers, Crowder hand-fights off a block by the tackle and then a tight end and gets to the QB as he's about to run out of bounds. Good recognition, hustle and speed by Crowder to get to the quarterback, but the rollout makes it relatively easy for him to get the sack.

The third sack was a thing of beauty, though. If you haven't seen it, go watch it. The Panthers are facing 3rd&11 on their own 24-yard line. The Bucs line up in a 3-3-5 front (3 down linemen, 3 linebackers, 5 defensive backs) and they have both Quincy Black and Geno Hayes lined up just outside the Tight Tackle, looking as if they're blitzing. Hayes drops back, but Black rushes the Tackle, then loops back inside behind Gerald McCoy who pushed the Right Guard so far back he's blocking the tackle from getting back inside. It's possible the Guard was supposed to jump off and pick up Black, with the Tackle then picking up McCoy, but that's nearly impossible to say. With Black going through an open hole, as Price is occupying the Center and Left Guard, he goes straight for the quarterback. Matt Moore didn't notice him until it was too late. I drew up a nice little diagram for you to visualize the play. 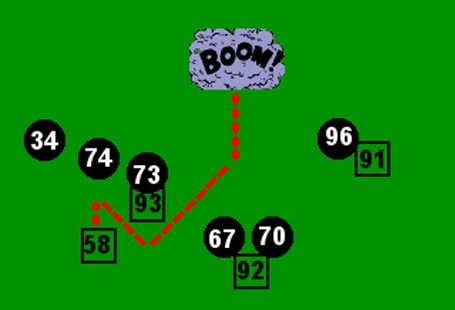 The last sack occurred with 12:46 left in the 4th quarter as Carolina was attempting to mount a comeback. The Bucs go with a four man rush against the O-line, with Moore and McCoy inside, White on the outside right getting a double team and Crowder on the left agains the right tackle. McCoy goes up against the center but tries to go around him toward where Moore is struggling to get by a Guard, causing neither of them to go anywhere. White isn't getting much done against the double team, but Crowder just schools Geoff Schwartz and grabs Moore low and from behind, who promptly drops the ball into Kyle Moore's eagerly awaiting hands. This was the last down Matt Moore played in this game.

With the exception of the pass-rush game that got Quincy Black the sack, all of these sacks happened because our defensive ends were better than their pass protectors. Especially Stylez' sack was impressive, beating a premier left tackle in Jordan Gross. Given the way these sacks happened, with little interior push, perhaps our DEs are being underrated even by the Bucs fans themselves. More than that, it's a strong statement by Crowder who is clearly pushing for the starting role at Left Defensive End.