I was sitting around reading Football Outsiders one day and looking at Freemans numbers. With their Premium subscription you can get numbers on his short throws, long throws and bombs. However, even if I were to pay for that, what does that really tell me? I still don't know his strengths and weaknesses. So I pulled up NFL.Com and started going through the play by play realizing that the only way to find this out (without reviewing hours and hours worth of game film ..... which I would love to do) I would have to start charting his pass attempts.

I want to add a few disclaimers before you jump into the graphs and numbers. First, I spent quite a while charting this. It is not perfect by any means, but it should help you get a better picture. I am confident I missed a pass attempt here or there (15 to be exact, although I did not include 2 Point conversions or obvious throw-aways) and the numbers probably won't match up to his actual stats. So, please don't hold me to it. There is about a 1-2% margin of error. However, unless you have inside access to Tampa Bay's scouting department, or another teams book on the Bucs you won't find this information anywhere else (at least not that I could find).

I was going to have a bunch of fun graphs but my years of thinking I was proficient with Microsoft Excel just came crashing down on my head.

Again, these numbers were pulled from NFL.Com's play by play. A short pass is anything that was thrown under 15 yards (it has nothing to do with YAC). A Deep Pass is over 15 yards.

First let's look at how often Freeman threw to certain areas of the field.

What does this tell us? Honestly, not much. He was fairly balanced across the field. It tells me he had slightly better protection on the left side (hence him going deep that way more) and his first instinct was to look short right. 30% more is fairly signifigant. I would imagine because he is a right-handed quarterback, his number one read is often lined up to his right to result in a quick hit.

What is more important than how often he looks one way or another is how often he completes those passes. Again, there is a variety of variables so don't read TOO far into it.

What does this tell us?It's plainly obvious that he throws it much more accurately when looking to his left. 8% on short throws and 14% on deep throws better than the rest of the field. It also tells me that he is getting to his second read more often than I would have assumed (though NFL QB's are expected to get to their 4th read if necessary) IF my above assertion is correct. A lot of time quarterbacks are able to get a better rotation of their shoulders when throwing 'across' their body. Now you clearly don't want to do this when you scramble as it result in a conflict of momentum (I'm not a physisct, but it sounds pretty good).

Nothing surprising here. The middle of the field is by far the most dangerous place to throw a football. It is the most congested, has the most zone possibilities and Safeties are the most athletic players on the field.

Here's a quick chart to view all the above stats in beautiful picture form. 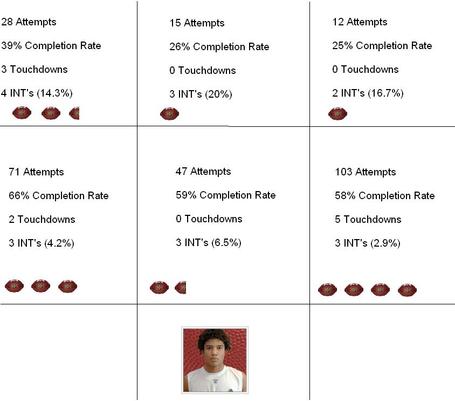 This also doens't tell us a whole heck of a lot other than he had better protection on his left side to find the open man down field on his left (as Quarterbacks look for windows) and again that his first read or his best receiver lined up more often to his right (this is an educated guess, not fact).

We also know that one of Freemans strengths is tucking the ball and getting positive yards on his feet. Some more educated guesses could be that he rolls to his right more often, resulting in more short passes to his right. Teams typically favor the wide side of the field when throwing short routes which could also mean that we ran a lot more to our left (because of better blocking) leaving the right-side open for more opportunities.

Don't look to far into these numbers, I think it just gives us a glimpse of his strengths. There are far too many variables to draw any hard conclusions off of this. However, when teams put together books on opposing quarterbacks, they look at their tendencies. This points some of them out.