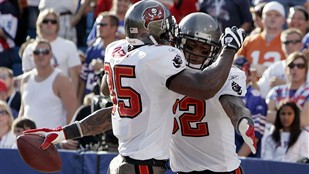 It was a good moment!

If you want to read about the doom and gloom of this team, please do not jump to the story. Jump off of a ......ok thats not very nice!

I call this one Niko's postgame thoughts because even though the post says my name, I want to make it clear these are my opinions, which tend to be more of a positive nature.

How can I be positive you ask after this game?

After two games now, it is starting to become clear what kind of a team we have..

1) A team without a very good defense, for varying reasons. Granted, This defense will improve each game, but youth throughout the ranks, and a lot of players that were not drafted for this new system are some causes that come to mind. Thats not to say there is something wrong with the system. If the Bucs want to abandon the Tampa 2, that is their business, and there is nothing wrong with that. But like Green Bay, changing systems sometimes takes time as you have to draft talent to match your needs.  There is a lot of youth on the defense, and these players are getting valuable working experience against playoff caliber teams. If you dont think that matters, look at Jeremy Trueblood and Davin Joeseph. The experience they got in that terrible 2006 season was very valuable.

2) The team is not deep enough to handle injuries. Jeff Faine was missed today badly, as Bill after Bill came up the middle. Its my hope that B. Compas can be made ready to try out at Center next week, if he can help and would be better. Not my call of course!

3)The offense is good enough to score points and keep games close, but also dangerous enough to cause self inflictions. Turnovers from passing  helped put the Bucs in that 17 point hole. The Running game was doing well with Ward. Much as Graham stayed on the bench for a hot Cadillac last week, Ward should have been on the field more against Buffalo. We seemed to abandon the game plan, if that was to run, however falling behind tends to do that to you. Youth on offense is also a problem, but its a problem we can live with.

No one rightfully assumed we were going to have a winning season. We hoped. We would have liked it. Heck, we still do.

But this team shows it has fight in it. Sabby has a terrible game last week, and shows some good plays tonight. Byron Leftwich showed a little more of the Preseason version than the Dallas version, but he put in 100% and never quit. No one quit, and that is good coaching.

While it is a long season, its my opinion this season is about to spiral out of control at some point next month. These close losses tend to take their toll on NFL players who all have a lot of personal pride.

Everyone knows my specialty is Bucs history. History repeats itself, and in this case, this season is starting to really look alot like one of those 14 years I often talk about. The question is, which one will it be?

Will it be 1996 where Tony Dungy finally got his message across to his players and they won game 7 and 5 of the last 7? Or is this more like a Vinny Testaverde learning on the job season of 2-14?

Only Time will tell, but I would refrain from falling victim to the same ole same ole that being passed around the internet these days. The "Glazers are cheap", "Raheem is in over his head" , "Josh Freeman is a Bust" stuff, or "Gaines Adams...." Nevermind. Well keep the Adams stuff ! He was NO WHERE near the quarterback, and its about time to start the official Gaines Adams is a Bust talk, because I see no sign of anything else.

Next week the Bucs host the NY Giants. Tonight well get an idea on what kind of team the Giants are. The Cowboys and Bills are good teams. We will be facing a Redskin team that is not that good, and an Eagles team that is hurting at QB. Then Carolina at home for a little bit of both.