GAME DAY RECAP-"Caution: Loss appears worse than it really is"

Share All sharing options for: GAME DAY RECAP-"Caution: Loss appears worse than it really is" 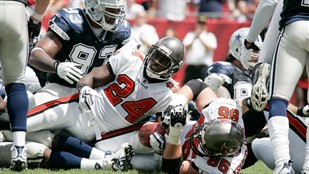 No Surprise really, the Tampa Bay Buccaneers lost to the Dallas Cowboys, a team several 'experts' have in the NFL final four this season. What the experts did not expect was a Bucs team that marched 450 yards on the Cowboys defense, including 97 rushing yards to a tailback with two repaired knees, and 62 more to newcomer Derrick Ward; with neither getting more than 13 carries. Nor did they expect Byron leftwich to throw for 61% for 276 yards and a TD, without an interception.

In fact, the question marks all over this team were on the defense and getting pressure on the QB. The last thing anyone expected was fan favorite Sabby Piscitellii getting completely lost in coverage. With still another 3 weeks without safety Tanard Jackson, the Bucs will have to deal with T.O. next week in Buffalo.

Special Teams were another sore spot on a franchise that has made a history of gaffs in that department. Early in the game, Mike Nugent had a chance to tie the game at 3 blocked when Tight End Jerremy Stevens let not just one, but two blockers in to converge on the FG attempt. Nugent himself was not without blame, and he missed his second attempt wide right; all together missing out on the 6 points that made up most of the difference in the game.

But no one was a bigger goat on the day than safety Sabby Piscitelli. Twice Sunday Sabby was out of position or took bad angles and allowed the cowboys two long touchdown runs of 66 and 80 yards. Kellen Winslow had a few good plays early on, but dropped a key fourth down pass with just under 7 minutes left in the game down by 13 points but still in the game.

On the other side of the coin, Raymond James patrons overjoyed with the running and return of Cadillac Williams, who churned out runs like it was 2005 all over again. Someone keep an eye out for his cleats, they may have been stolen back from the Hall of Fame.  Williams ran hard at a clip of just over 7 yards per carry. Newcomers performed just as admirably, as Byron Leftwich gave it all staying in a pocket provided pretty well for the most part, and threw accurately and with command. Michael Clayton was a physical receiver like he has always been, but caught balls in traffic at key moments. On Defense, Linebackers Quincy Black and Geno Hayes stayed physical with the Cowboys.

Of no surprise to anyone, the Offensive line which has been building with high round draft picks over the last few years did a good job of opening holes for running backs and protecting Leftwich.

Up next, the Bucs travel to Buffalo for the first time ever in their history; the Bills can be watched tomorrow on MNF.

High Def Highlights of the game will be ready tomorrow Morning.