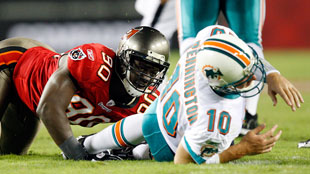 Some thoughts after watching Preseason game 3 for the second time:

Cadillac Williams is back. He is running strong, and hard. But the fact is, he is another semi serious injury away from being finished, or at least should be. There are a lot of doctors I have read state that these two surguries have strengthened his knees that may or may not have been very vulnerable genetically. I hear Ron and Ian talk alot about how he only had three games. That is rediculous. The man went over 1000 yards, he had 400+ after three games. After a 6 game absence, he came back on the Road at Atlanta and his first carry was for 30+ yards on his way to a 100 yard day. He would have a few more in 2005, so it was not just  a few games

I do not remember the last time the weather stopped a game in Tampa (NFL).  I can recall a preseason game vs Redskins in the 80s that was pretty bad, and 1979 Game 16 vs KC, and 1983 vs Chicago, rank among the worst downpours ever witnessed.

Yes Im kind of a McCown homer, but I really think he got an unfair shake last night. The weather got worse when it was his turn, Stevens mishandles the best thrown ball by anyone all night, and he starts out 0-4. He shows he is more mobile, by far.  Its clear Freeman is not ready, but also as clear that one day he will be something special. For now, Im glad Im not the one who has to make this decision.

The Defense is giving us reason to be hopeful. There is pressure on the QB, and runs dont seem to gash us. If this was one of the top two concerns about the team going into 2009, Im feeling a lot better already after three practice games. If its true Roy Williams is hurt, Dallas could be in for a Ruud awakening!

Maurice Stovall made a statement to everyone in Tampa Bay. " I found the keys to this dog house, and Im breaking out!!!!"  No he didnt actually say that, but might as well have.

Brian Clark on the other hand is the Bizarro Sammy Stroughter.  Both were early camp favorites we were told to watch. Well we are watching, and we see Clack dropping balls too much.  Sammy meanwhile provides depth and backup to Kick/Punt Returner Clifton Smith, something we have never had before. Imagine putting Smith and Stroughter left and right on a kick off return. Who do you kick to if your the other team? Nice problem to have.