Price of A Season Ticket!

Share All sharing options for: Price of A Season Ticket! 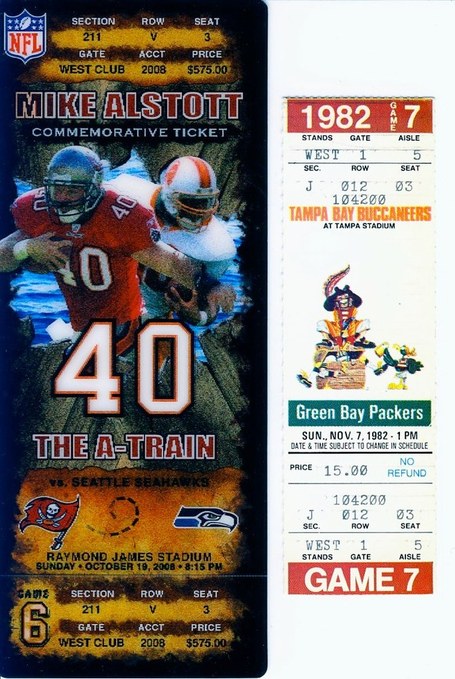 Recession, Depression...Words to describe the Buc's Offense? No, but A Funny thing came up while I was thinking of our current economic situation, and my choice for Ring Of Honor inductees. I started thinking that some of the guys who will get elected to the Ring of Honor, played in the Old Orange Uniforms of yesteryear that are going to be shown off(?) next year at home Vs the Packers! When I think of those Orange Uniforms Im not talking about the Orange Pants concocted by Sam 5 dash 2 Wyche, but the Orange Tops and White Bottoms of McKay's Men. You cant help but remember the hot aluminum (were they aluminum? sure they weren't cast iron skillets?) bench bleacher type seats of the old Sombrero. Renting a cushioned and Backed Bucco Bruce seat for a Buck was a no brainer, if you could afford it after paying 12.50 for your ticket! OH laugh if you must at the cost of a ticket, but considering the average worker came home with $100 a week, that was a good chunk of your salary back then. OK , who am I kidding, one look at a Ticket today and we long for the days of 1.50 Cokes and 2.50 Beers. Funny thing, those beers and Cokes only Doubled and Tripled Since the early days of the Buccaneers. So What about a season Ticket on the West Side of the Stadium so your not looking right at the Sun when its trying to get those aluminum Bench seats up to proper grilling temperature of 350 Degrees? 100%?  300%? Would you believe 3,800 Percent!?!?

Thats Not a Misprint!  In 1982, a Season Ticket on the West Side of the Stadium about 40  yard line was a whopping 15 dollars! 27 years later? $575 dollars for a Club Ticket on the 48 Yard Line. Heck the 15 dollar seat was only 12 rows behind the Buc's Bench! Kind of makes that 8 Dollar Beer a little easier to swallow doesn't it! So the next time your out at the New Sombrero, the Ray Jay, remember when its September and those red seats are keeping the backs of your legs a semi-healthy shade of pink, and your putting down 5.00 Dogs, that you've got it good...and you wont have to take out a 48 month finance agreement for season tickets like your grandkids will!