Does Plaxico Burress Make Sense for the Bucs? (If I thought not, I should have my head examined.)

Share All sharing options for: Does Plaxico Burress Make Sense for the Bucs? (If I thought not, I should have my head examined.) 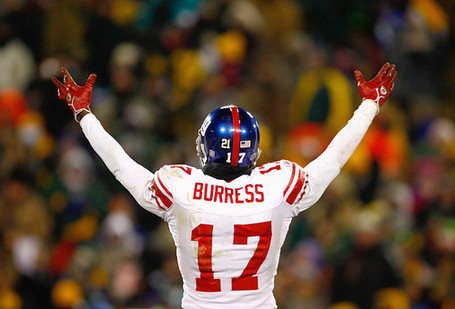 In the vast netherregion that is the NFL offseason, the two things that probably interest Bucs fans most is 1) the QB race, and 2) will the Bucs land another playmaker this offseason.  Recently, the Bucs have raised some eyebrows about their semi-open interest in Plaxico Burress, despite his pending legal troubles.

For those wondering what's going on with that case, he turned down a plea bargain this week that would've sent him to the hole for only 3 months.  As he's facing a 3+ year minimum sentence if convicted, that seems like a helluva deal to pass on, but whatever.  I think his plan is to fight this thing long enough to try to play this season, but that might not save him from a suspension courtesy of Mr. Commish.

Thus, assuming arguendo that he is eligible to play and that he'd be willing to sign a one-year deal or a multi-year deal contingent on his staying out of the pokey and eligible to play... does he make sense for the Bucs to sign.  Of freaking course he does.  Cut out all the, "well, he's a problem guy/he's a criminal/we don't need a guy like him" garbage.  Don't tell me you wouldn't secretly be giggling if he signed with the Bucs.  It's a pretty simple question: do you want the Bucs to win?  Yes.  Does he make the Bucs better?  No doubt.  Are the Bucs better off without him?  No.  Has he carried as big a prima donna attitude or ripped apart a locker room like Terrell Owens has? Nopie.  He almost single-handedly carried the Giants to the damn Super Bowl.  Without Burress, the Giants became a 9-7-talent team.  Antonio Bryant wants to talk about Boldin and Harrison helping take the Bucs to the Super Bowl, but Burress can.  He's already done it.

Burress brings the complete package for a wide receiver, especially one in the Bucs' system.  He's clearly a home run threat capable of winning jump balls over diminutive corners.  We've seen that.  More importantly, in the Bucs' new run-first scheme, they'll face numerous 3rd and short distances in which they need a big receiver to go over the middle on slants/digs, or take a hitch/curl pass and muscle it out for a first down.  Plaxico can do those things very well and would provide the Bucs with that big target over the middle they currently lack.  In the running game, he's a big, long-armed blocker who could help seal outside running lanes along with slot receive and uber-blocker Michael Clayton.  If  the opposing defense moves their nickel corner or free safety over to help on Plaxico, the running game instantly opens up for big plays off-tackle without that secondary help in the running lane.

Regarding whether Burress would behave, keep in mind that he's basically on probation in the commissioner's eyes right now.  Even if he plays this fall without suspension, he's going to have to keep his nose clean, and Rosenhaus, as scummy as he is, won't let him forget that.  In short, he has every reason in the world to keep his mouth shut, stay out of trouble, and show the commissioner he's not a problem.

So there it is.  Marriage made in heaven as far as I'm concerned.  I'm not going to put up a poll with options I can think of... you all know where I stand.  I want you to weigh in below and let me know why or why not the Bucs should push hard for Burress.