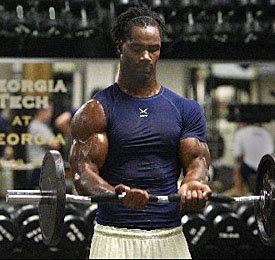 ... The Bucs have reportedly been taking a close look at former Yellow Jacket DE Michael Johnson. The Bucs brought him in for a visit and Johnson came away confident about his chances of landing in Tampa Bay:

"It went real well," Johnson told Pewter Report. "I enjoyed meeting with the staff. I’m from the South so I enjoyed being not too far from home. It seems like a young team and a young staff.

"That is always real fun to be around. You have that energy, and it seems to me like they are going to be competing for a Super Bowl championship in the near future, and I would love to be part of it."

Johnson has the tools to become a prototypical Jim Bates' pass-rusing defensive end... 6'7", 266 lbs. Long arms. Explosive first step. Fast for a DE (4.68 40 time at combine), which makes him deadly on deep drops. If he does fill out, in addition to maximizing his pass rushing potential, he could also become difficult to move off the line in the running game, which you'd think would make him as close to a complete DE as one could hope for. He would immediately become a situational rusher for the Bucs and could push Stylez G. White for the starting spot opposite Gaines. He could provide the Bucs with a second crack at a franchise pass rusher should Gaines falter in his boom-or-bust third year.