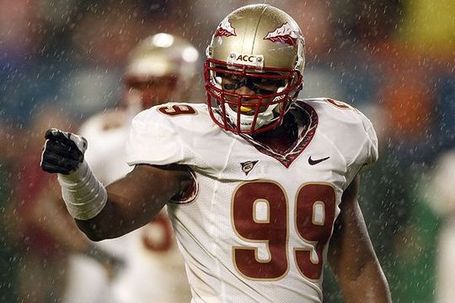 I'm pretty sure not much explanation is needed of Brown's talents to JScott, UNFNole, and several others on this site, but those of us who don't follow Florida State football on a regular basis might not know too much about the impressive accomplishments of FSU DE Everette Brown. After taking a closer look at him, I'm just blown away at his sheer speed and overall talent. In my days of watching football, I've seen alot of fast, talented pass rushers play, but on tape, Brown looks as fast as pretty much any college defensive lineman I've seen. Straightline running speed.... this guy's got it. He's deadly against a QB in a five or seven step drop because he can literally fly past the tackle on a dead run, so he can get to the QB deep in the pocket with a world of momentum. He also appears to be the odd apple for Florida State's standards: a high quality character guy. Check out that blazing speed below...

Check out his impressive stats:

Tomahawk Nation put together a detailed, comprehensive piece on Brown, listing his strengths and weaknesses, and providing highlights and commentary of his prospects for NFL stardom. Check it out here. TN thinks, due to his smaller frame, he'll ideally fit in a 3-4/pass-rushing OLB more than as a 4-3 DE. TN raises concerns about his ability to shed blocks from offensive tackles and stop the run as a 4-3 DE and points out that as a 3-4 OLB, he wouldn't be matched up against the tackles and could gear up to rush the passer better. No doubt, in my opinion, he could raise immortal cain as a 3-4 OLB against your average NFL TE trying to lock him up on a blitz. Advantage Brown.

Mocking the Draft put together a report on Brown, which can be viewed here. The guys rave about his speed and lower body strength, but also recognize his tweener status as a concern. They note he has basically no experience in coverage due to the Noles' basic defensive scheme, which could be a very big concern in my opinion for a team looking to draft him as a 3-4 OLB. 3-4 OLBs are freaks who have to be able to assist in the run game, get after the passer, and drop back in coverage.

Craig T's analysis... Ther'es a heckuva lot to like about Brown. He brought the thunder and the pain off the edge in the pass rush last year. He earned his All-American selection last year with 13.5 sacks and is evidently coachable and adept at learning his position, as his production has skyrocketed since his freshman year. It's hard to say how he'd do in a more complicated NFL defensive system or in coverage in zone blitz packages, as Florida State didn't get too tricky in their fronts as far as I could tell... basically just moved him around to match up on either side against whatever tackle was weaker. He even lined up at 7-technique and outmaneuvered a poor Maryland guard in the highlight film. Freak. That said... while he may have an allegedly strong lower body and have the ability to maintain a push against blockers, I have concerns he could handle the bulk of your average NFL offensive tackle on an every down basis. Also, with a smaller frame, I'm afraid he could have a tougher time shedding blocks and swimming OTs to get to the quarterback on shorter drops, where the QB is more protected in the middle of the pocket and can't be had by just rushing upfield past the OT. I hope I'm wrong, but he'd need to put on a bigger frame (up around 260 at least) to be an effective every down rush/run-stopping 4-3 defensive end in my opinion. Can he get there? Yes, I think so. Right now, I agree with Tomahawk Nation's astute observation that his physique and skills are better suited for him to make a more immediate impact as a 3-4 OLB.

...... His size varies on different sites from the 230's up to the 250's and from 6'1.5" to 6'4" (!), so he may or may not have that much more weight to add, depending on his current physical makeup. From what I've seen, he appears to be closer to the 250's around the time of the combine. Even still, he's slightly undersized for a 4-3 DE and, despite having the leg strength for an effective bull rush, needs to have top-end upper body strength to compensate for his lesser height and weight and shorter arms.