Terrell Owens is a Buffalo Bill

Share All sharing options for: Terrell Owens is a Buffalo Bill 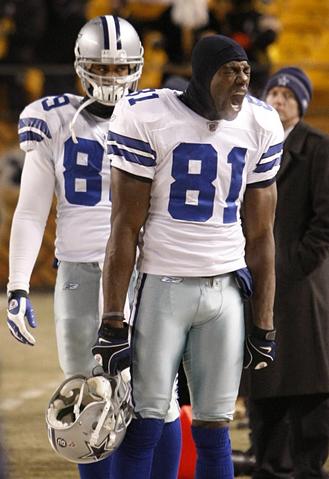 Kudos to cowatkins78 for bringing the community the news.

Disruptive WR Terrell Owens has reached a one-year, $6.5 million agreement with the Buffalo Bills today.  As a Buc fan, this is great news.  Terrell Owens destroyed the Niners.  He ripped apart the Eagle locker room, unable to be controlled by vets like Dawkins, Hugh Douglas, and McNabb.  He went to Dallas and stayed down pretty well early.  However, when push came to shove, T.O. showed off his true colors and obliterated (no,no, there is no other way to say it... obliterated) the team chemistry and turned the locker room into a faction vs. faction stand off.  Owens also seemed a step slower this season and his numbers were certainly down, although it might be said it was because of Romo's injury in part.

Bottom line: the Buccaneers have made it clear they are starting a youth movement to some degree and will give younger players a chance to earn starting jobs.  They are looking for some young guys to step up and lead by example.  An aging, peeved, disruptive Terrell Owens fit none of those parameters and made no sense on this roster.  Make no mistake, this guy has not learned his lesson and never will.  He will continue to be a disruption and chemistry wrecker.  Godspeed, Bills... you're gonna need it.