Share All sharing options for: Free Agent LB Angelo Crowell to Visit the Bucs Next Week 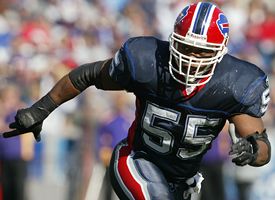 UFA LB Angelo Crowell will come to Tampa for a two-day visit beginning Monday.  Crowell was drafted in the third round of the 2003 draft by the Bills and cracked the starting lineup at OLB at the start of the 2005 season.  Although he piled up the stats in 2007 with Buffalo, injury is a big concern with him.  He's only started all 16 games once and more importantly is coming off of knee surgery in August that kept him out for the entire 2008 season.  Knee injuries are certainly some of the most debilitating, nagging injuries a player can face.  That said, if he can return to close to his 2007 form, he could be a coup for the Bucs and should be able to push hard for a starting OLB position.  He's also effective in coverage, tallying 5 INTs since 2005.  If the Bucs work out a deal with him, I hope it's an incentive-laden deal.  However, with the free-agent linebacker talent pool beginning to shrink, they might have to guarantee a little bit more money than they'd like to get him.