Dare I say it..... an offensive identity might be forming out of this amoebic roster???

Share All sharing options for: Dare I say it..... an offensive identity might be forming out of this amoebic roster??? 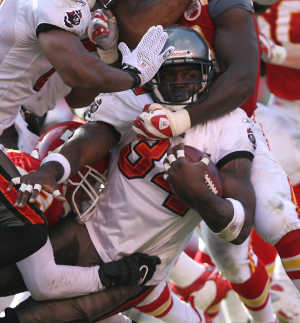 Take a look at the above-picture.  Focus on it.  That's what you'll likely be seeing alot of next season.

Steve Duemig had GM Mark Dominik yesterday on his afternoon talk show on AM-620 and asked him point blank a couple of pointed questions.  (The first was whether he thinks he should be beaten with a wet noodle had any regrets over how he handled the Derrick Brooks situation... which he dodged gracefully).  Duemig asked Mark what identity and style he's trying to assemble here.  Mark responded that he sees them on offense as a physical, run-oriented team.  He highlighted Derrick Ward's tough running style and Mark Clayton's value as a blocker and cog in the running game.

When you consider Jags' run-first scheme, the personnel moves so far jive.   You're looking at a team being built to run the football first and foremost.  You'll likely have a young QB leading the team next season.  As such, you're looking at a team that will throw much less than last year and will likely rely on a well-timed, strong play-action passing game.  And why the heck not run it?  You've got a pair of tough guys in the backfield ready to tote the rock.  Derrick Ward indeed is a physical, downhill runner who reminds me of Earnest Graham's slightly more tattooed twin.  Altough I'm skeptical about Ward's value as a three down back, there's no doubt he and wrecking-ball Graham will form a potent one-two combo to pound opposing defenses.  Of course, Mike Clayton is a strong, physical run blocker.  Mr. Stevens and Alex Smith make for a nice pair of bookend blocking TEs that can both seal running lanes on the edge where the defense employs a 4-2-5 or nickel set, or slip out effectively in play-action when the defense employs a 4-3 or 4-4-3 set.  Our offensive line showed last year that they can take over a game physically if they're actually given the chance.  I'm completely confident in the ability of Joseph, Sears, and Faine to create consistent interior running lanes.  In case you weren't aware, we've got a pretty fine offensive line, people.

Kellen Winslow is not a good blocker, but could become the key piece in the whole passing game.  If the Bucs are in a rhythm of running the ball successfully, you're likely going to see the strong safety start to cheat up to stop the run.  There, you line up Winslow on the opposite side.  Winslow can slip out off the line against zone coverage and run a post or deep dig to get deep behind the cheating safety... or, in man coverage line up against an OLB and beat them deep with his WR speed without the normal supporting safety help.  Moreover, the free safety might have his hands full on the other side by having to shade over towards our outside home run hitter Antonio Bryant, so could really be open season in the deep middle of the field for Winslow.  Conversely, any adjustment to the middle of the field to account for Winslow would help free up our WRs outside in one-on-one coverage.  Bryant ate one-on-one coverage for breakfast last year.  Soak on that, boys.

If they become a consistent 60/40 run/pass team, I would be happy... as it would mean they have a successful rushing attack.  One thing that irritated me off to no end was watching Gruden, with either a 4-point lead or a 3-point deficit, completely dump the running game in the 3rd quarter and pass, pass, pass, pass, pass, pass.  Pass short, pass ouside the hashes, pass middle.  Call hitches and slants that don't reach the sticks.  Inexplicable.  You HAVE to run the football.  You need to wear down defenses.  You need to mix the run and pass to keep the defense off balance.  Seems simple, but it apparently wasn't that simple for whatever reason last year at times.  Teams that run, win, and I hope the Bucs do employ a consistent and effective physical running game and show NFC South defenses and the rest of the league that they're going to feel like they've been in a war when they play the Buccaneers.