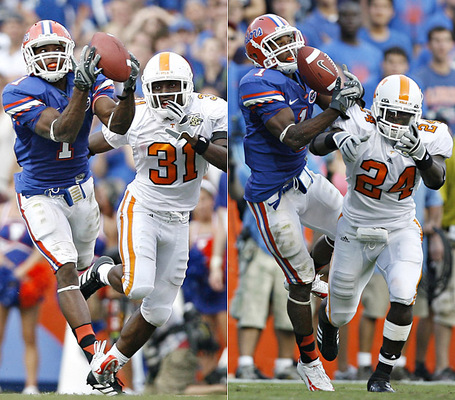 Yea, there's a bad stigma working against Florida receivers (even though Ike Hilliard and Reidel Anthony were ok). Percy Harvin appears ready and able to stop that trend. Possibly the most feared offensive threat in college football last season, Percy Harvin smoked opposing defenses for the Gators out of the backfield and out wide. If anyone knows that, it's Vols fans like myself. Oh wait, nevermind... I think Brandon James is actually our daddy (3 PR's taken back to the house in the last 3 years...one of which was called back, but still...). This image seemed fitting.

Check out Mocking the Draft's detailed report on Harvin.

TheBullGator has some good comments on Harvin after we took Harvin with the 19th pick in the NoLogoNeeded mock draft.... just scroll down.

Analysis: Harvin can line up out wide, take a quick hitch pass, and either speed past or push an opposing defender for a sizeable gain. He can line up wide and run a lead counter, where the QB will fake the handoff to the running back and hit Harvin coming down the line of scrimmage for an end around.... or come in motion and take the shovel pass around the end. He also took the ball out of the backfield in Florida's draw-it-up-in-the-dirt running attack, hitting big plays on the option and in the running game. Or.... he can just do what othe WRs do... run down the field and catch the ball. Just get him the ball. He has an incredible knack for not just finding the hole, but reading a defense to find where he needs to go at the next level to maximize his gain.

I don't care about the knock on his speed by some pundits. Just watch him play. He accelerates like a Ferrari and blows past defenders with Usain Bolt-type ease. The dude has the skills to become a playmaker at the next level. Period. He's definitely got the body for it, too. He's very strong for a WR... he put up 225 lbs. bench 20 times at the combine (it was also reported on 620-WDAE's Ron and Ian show that he maxed out over 400, but I can't find a definitive link). He runs with a low center of gravity and manages to fall forward for the extra yard. He can get up to get the ball too, as he put up a 37-inch vertical at the combine.

His ability to run routes and play the part of a prototypical NFL-type receiver has been questioned by some due to his hybrid, tweener type play. However, Raheem Morris and other NFL execs/coaches attended Florida's Pro Day in Gainesville, and Harvin reportedly blew everyone away with his route running and receiving skills. I also don't think he's had the opportunity to show off his downfield receiving ability as much as he might if Danny Wuerffel had been throwing him the ball in Steve Spurrier's hey days, due to Urban Meyer's unorthodox offensive scheme.... or at least that's what my Gator-fan Dad complained to me about every Saturday.

How would Harvin fit in the Bucs' offensive scheme? Well, since we still don't know what that offense is going to look like, it's hard to say. There's no doubt that he could create some matchup problems in the right looks if he gets matched up on a linebacker, safety, or an average nickelback... kind of like how the Saints utilize Reggie Bush effectively in the slot. He also requires a defense to account for him on every play and can be used as a decoy to put other players in good position to make plays. He might be a little small for a WR, but he should be strong enough to be a somewhat effective blocker in the running game.