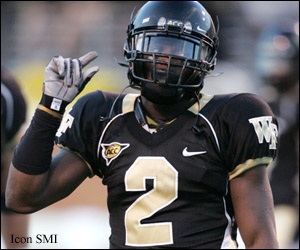 Here's to your Alphonso Smith mancrush, UNFNole. It's warranted. After watching Smith's highlight reels and reviews, I'm beginning to get on board with this guy as a tremendous asset to whoever pulls the trigger on him. One of the best overall CB prospects in this draft, Smith brings the total package in what you're looking for in a shutdown corner... good footwork, nice recovery speed, controlled aggression, and great instincts for the ball. He's slightly undersized, but my freaking gracious he sticks to WRs like glue. Check out a brief highlight clip of him here:

The guys over at Blogger So Dear provided me with the following breakdown of Smith:

Where can I even being with Alphonso Smith? He is such a fun player
to watch on the field and has a great swagger off the field as well.
I am a senior at Wake Forest, so I have watched almost every one of
his games live as I travel with the Deacs. As you probably know,
Phonz is undersized compared to the average NFL corner, standing at
5'9" and weighing in at 193 pounds. However, he is relentless in
coverage and just has a nose for the ball. Whether he was matched up
with the 6'6" Greg Carr of Florida State, Heyward-Bey of Maryland or
Eron Riley, the great receiver from Duke, Phonz ultimately came down
with the ball and the win. (The Duke INT was a game-winner -
http://www.youtube.com/watch?v=vRYmZEIXZAo). He is the all-time ACC
leader in career interceptions. The only knock against Alphonso's
play is that he sometimes gambles a little too much and always tries
to make the big play. To our surprise, he didn't get burned as much
as you would think considering his risky play. Smith can make up a
lot of ground in little time and just always seems to be around the
ball. He also blocked several punts for the Deacs over the last
couple years.

Since he is the all-time ACC leader in INTs, he has had several great
moments at Wake. However, there is one moment that stands out from
the rest. In his junior season we were getting destroyed at home
against Maryland. They had the ball inside the 5 yard-line in the 3rd
quarter and a TD there would have ended the game. For some reason,
the Terps decided to throw it to Phonz's side, where he picked it and
returned it 99 yards for six. That sparked a crazy comeback and we
ended up winning in overtime.

Alphonso is a great guy on and off the field and will succeed where
ever he ends up. He also has quite the swagger off the field
(http://www.youtube.com/watch?v=bWioMuQRbyI) One of my favorite
Alphonso quotes was to Houston Nutt, the coach at Mississippi:

"I was telling Houston, 'Why are you bringing all that goofy offense
into our stadium?'" Smith recalled. "He was saying, 'We're coming at
you No. 2. '"So this is what I said to him. I said, 'Well if that's
your game plan, you won't be at Ole Miss too long.'"He just laughed at
me."

Here is a great article that will tell you more about his personality
and story:

In the NFL I feel that Alphonso will be ready to produce sooner rather
than later. He may struggle in the first few months as he adjusts to
the overall skill level of NFL receivers and a new defensive scheme.
However, his relentless pursuit of the ball and desire to prove that
he is elite despite his size will lead him to a successful NFL career.
If I have learned one thing about him, it is never bet against Zo.

Mocking the Draft provides a nice scouting report on Smith... you can check it out here.

I'm really high on Smith as a good fit in Jim Bates' new defensive system. He plays tight in man coverage, stops and restarts well, plays smart with nice instincts (he seems to know when to be aggressive... those were very nice INTs against FSU and Clemson), and appears to be a solid tackler (as that big Clemson TE can attest to). His aggressive style bodes well in a Bates system where CBs will be blitzing more often. He reminds me on tape of a younger version of Ronde Barber. At 5'9, he might have a tough time handling big, physical receivers who know how to use their bodies and hands correctly, at least early on... but again, hey, Ronde's not a big guy and has managed to handle bigger receivers... as have several other small CBs. If he's truly a good one, size won't be a major hindrance. All in all, he might be joining that short list of players I'd consider drafting rather than passing on and trading down.