Share All sharing options for: Jon Gruden responds to comments of former players... "hurt" by comments 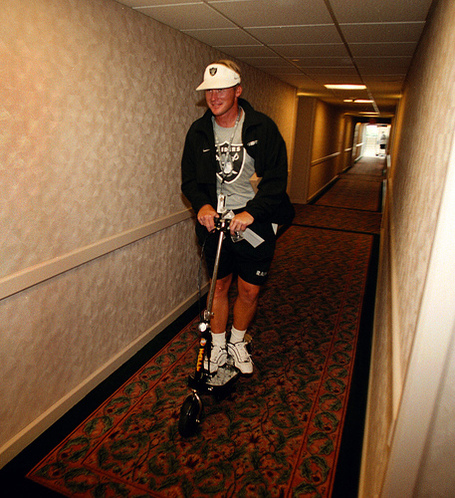 Profootballtalk.com has a link up about Gruden's first media interview (with Chris Henry of the Orlando Sentinel) since the largely negative comments made by several former players.  Per Gruden:

"Yeah, it hurt," Gruden said.  "But I’ve also had some of the greatest phone calls that made it all worthwhile.  I remember when I got the job, they weren’t real happy with where they were at that time, either.  There was a lot of criticism of the last coach [Tony Dungy].  I remember when Mike Holmgren left Green Bay, they were killing him.  I remember when Bill Walsh left, what Joe [Montana] said about him.

"So this happens.  When you’re the head coach, you coach 53 people, and their wives and their girlfriends and their families and all those people.  So I’m not going to worry about it.  Yeah, I’m disappointed that I’m a ‘scumbag‘ and that I couldn’t get along with the quarterback [when] I live my life through the quarterback.  Mike Clayton has his own opinion and I respect that."

Gruden also said that he’ll continue to be a fan of the Buccaneers.  He’ll even attend their games.

"I’ll be the biggest Bucs fan out there this year," Gruden said.  "And I’ll be there; I’ll be at the games.  I’ll root for Raheem.  I love Raheem.  I hired Raheem — twice.  I have a lot of confidence he can do the job and wish him the best."

But Gruden seems to be stung by the general notion that, because he was fired, it means that he failed.

"I worked as hard as I could work and I loved it," Gruden said.  "I feel a great sense of accomplishment, but I also feel a great sense of loss. . . .  I’m never going to point the finger at anybody, either.  I’m good.  I did my best.  My body of work is out there for everybody to evaluate. . . .  We won three division championships; won 60 games in seven years; won a Super Bowl.  It wasn’t like it was total futility."

Glad to see Gruden took the high road where some other guys didn't.  I will miss Gruden's fire and flair on the sidelines, but I won't miss some of the personnel decisions, changing QBs like underwear, and locker room tension with certain players.

P.S.... this picture could only have been better if Jon was on a Segway.