What would you do with the White Tiger?

Share All sharing options for: What would you do with the White Tiger? 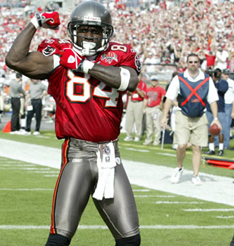 The Bucs have an important decision to make this offseason... what do they do with the majestic white tiger Joey Galloway? Bucs' beat writer Anwar Richardson raised the question recently in his blog. He notes that Galloway was a Gruden favorite that never had to work fully during training camps and during weekly practice during the season. He also suggests Raheem Morris should consider cutting Galloway this offseason to show the players that he's the boss and won't play favorites like Gruden did.

That's just ignorant. You don't cut a player for the sake of demonstrating who's the boss unless that player is named Terrell Owens. Yes... Galloway has had a lighter load than other players during weekly practice, but it was obviously due to his old, achy knees, which landed him on the team's injury report regularly. Galloway is a hot and cold, hit or miss player, but he's probably still one of the fastest players in the league and gives them a dual deep ball threat with Bryant that could still stretch defenses and conceivably open up the Bucs' running game and dink and dunk offense within the 15 yard range. The Bucs need to evaluate him and try to get some mileage out of him if they still can. If he's unhealthy or can't bring to the table what he did in 2007, then the Bucs should let him go and wish him the best. However, letting him go just for the sake of sending a message would send the same one many have suspected over the past few years... that this team still doesn't know what the hell it's doing with its personnel.