The Post-Mortem Presser: An Odyssey of Coachspeak and Issue Dodging

Share All sharing options for: The Post-Mortem Presser: An Odyssey of Coachspeak and Issue Dodging 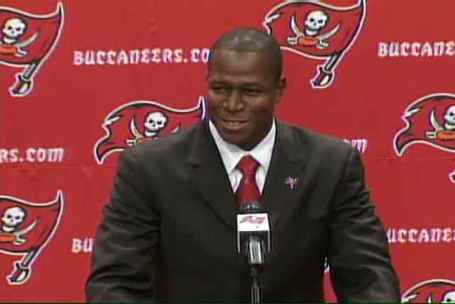 If you missed the press conference, you can check out the video here.  Some low... er, highlights paraphrased below from today's 3:00 presser held by Dominik and Morris:

... Dominik: this is a decision we wanted to make... we've decided to go in a different direction and we've let it be known to those men.

... Morris: I wouldn't be in the position I'm in today if it wasn't for these players.

... are we talking scheme problems with these guys?  Talking about what the Bucs want to look like.

... June was younger, why him?  It's not looking younger, we want to look like our plan.  Barber, Hovan not younger, but are part of plan.  Guys released are not.

... What's this "plan"?  Fast, tough, disciplined team.  It's about us moving forward.  Let other guys compete.

... D: Saw Brooks start career and has seen every one of his games, made it difficult for him.  Took time because it was difficult decision, but they decided at combine they needed to do this.

... Did you ask Brooks about backup role? Why not let him finish as Buc?  D: We made decision, for organization.  We didn't picture DB wearing a hat on sidelines in a backup role, so we made the decision.

... Did you think about the PR backlash?  Hope not viewed that way.  Have respect for DB and others.  Amazing person and player.  Expect him to be a part of Buc family in future.

... Did y'all think he would refuse to retire?  Many great players just play, which gives them amazing longevity.  Can't speak for Derrick, but it seems hard for players to step away.

... Is this tough for you?  M: yes, but they are decisions, made based on moving forward, becoming better.  Can't have a problem with making those decisions and will be judged down the road and is willing to accept responsibility for those decisions.

... Can this team be competitive down the road?  M: You always want to think you have a competitive team.  Plenty of time to build this team up for how they want to look next year. In process of that, FA/Draft around corner.

... Will these moves make the team more talented next year? D: Idea is to improve talent on team.  That's direction we're heading.  Expect to be explosive football team (HOW???).

... What do you say to fans who have their doubts? M: fans should doubt.  We have to make them believe.  That's our job.

... WR and LB... do these moves speak to considerable changes at these positions?  When you let go 2 starter LBs, there will be changes.  We have 7 LBs under K and 6 WRs under K.

... Talked w/other players about this?  M: Called leaders on team and gave them the heads up, let them know our direction and play.  They're ready to go, and are excited to have an opportunity to compete, but they weren't excited the 5 guys are being released.  Everybody wants to become those 5 guys and look to fill those shoes.

... When talking to grandkids in 50 years, what will you tell them about #55?  M: A great person who helped him develop as a Coach.  He's an unbelievable man and a role model to us all.  Also, would talk about the splash plays he made.  The 2002 season.  Driving a truck off field after winning player of the year.  Talking about a legend.  D: He and Sapp created the Tampa 2 and kept it going... a forefather of the Tampa 2.

CRAIG T'S TRANSLATION of said coachspeak... While it's tough on us to make this move (and I believe that), this move was about cutting salary and getting younger. We're going to stock our roster with 2nd tier, affordable free agents and cheaper draftees.   We're not going to talk about Free Agency because we really don't have any intention of being players for top tier free agents, so we don't want to hack off our fans on two fronts this afternoon.  We are telling you the number of LBs and WRs under contract because we really have no idea who out of that bunch (sans Barrett Ruud) is capable of becoming a playmaker.