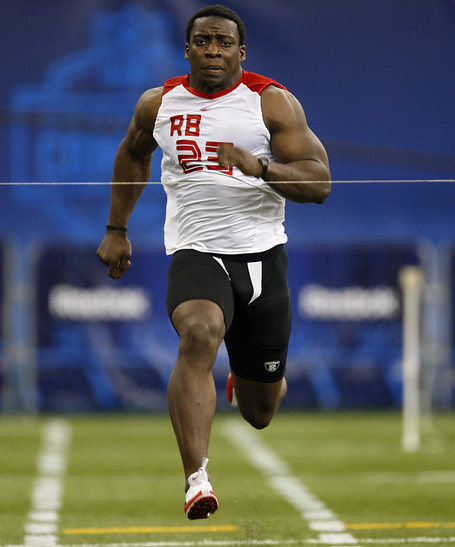 QBs, RBs, and WRs hit the ground running this year, or well, so the expression goes.  The top 40 times for these positions are listed here..... courtesy of our friends over at Mocking The Draft.  The RBs turned in, eh, meh, efforts this year, with UVa's Cedric Peerman putting up the best time of 4.45 seconds.  If you recall last year, uber-stud rookie RB Chris Johnson of the Titans crashed the draft party by posting a RB-best 4.24 seconds at the combine.  Speed is overvalued in the NFL in the minds of scouts and GMs (in my humble opinion), so this is where fringe or secondary players could become media darlings(ala Chris  Johnson, Dexter Jackson).... or become lepers (ala Mo Clarett... remember how horrible he ran??? And looked???).   So who helped and hurt themselves this year???

... Darrius Heyward-Bey.  He ran the fastest time of any offensive player at the combine with a sterling 4.30.  He's got okay size at 6'2", 206 lbs.  He slipped in productivity last year at Maryland, hauling in only 16 catches (part of that has been attributed to subpar QB play).  He's also been considered raw and questions remain whether he has the skills to develop into a pure, fluid, route-running WR.  However, for teams on the fence, his 40 time will no doubt help give them the added push they need to pull the trigger on him.  He might have just put himself into the first round.

... Cedric Peerman.  He hasn't been listed with the Morenos, Wells, Greens, Ringers of this draft by the "experts", but he blew past all comers today, posting a RB-best 4.45.  He's also got ok size at 5'10", 210 lbs.  I remember watching the kid run vertically with great ability to get the extra yard or two through contact and always fall forward.  I think he could be the Matt Forte of this year's draft.

... Beanie Wells. 4.59 wouldn't put a RB at the top of the RB pool in most years, but when said back runs has ideal tools to become a punishing between-the-tackles runner, a 4.59 looks pretty damn dood.  What makes it look even better is that fellow first-round projectee Knowshon Moreno ran .03 seconds slower.  As long as Wells pumps the iron a decent number of times, doesn't fall on his ass during shuttle drills, and can jump higher than my grandmother, he should solidify his position as the first back taken in April.

... Johnny Knox.  This year's diamond in the rough?  After turning in a blazing 40 time of 4.34, execs will open their eyes and take notice of the relately unknown, but speedy Knox.  He may not have ideal size at 6'0"/186, but Knox might have a chance to go in the 3rd or 4th round and possibly higher if he can continue to impress scouts.

... Knowshon Moreno.  Good lord, son!  4.62??? I had friends in high school run below 4.6!  You were beaten out by a bruiser like Wells who already had the edge on you in size and and perceived ability to be an every-down back.  Bah.  Anywho, Moreno had better get a video up there on youtube of him jumping out of a pool or over a car, because... damn.

... Louis Murphy.  Considered to be a project wide receiver worth taking a gamble on because of his top-end HR-threat speed (yea, yea, I heard about how Moore, Demps, etc are alleged to be faster at UF), Murphy finished a tenth of a second or more behind WRs Mike Wallace, Darrius Heyward-Bey, and Johnny Knox.  Not good for Mr. Murphy.  He'd better blaze at Pro Day and show he can run routes better than he's given credit for.  Also wouldn't hurt for him to run privately for some teams and get the results out publicly.

... Josh Freeman.  If 34 INTs in 35 games in a defensively challenged league isn't enough to give you pause about Freeman, a 40 time similar to that from a slightly athletic couch potato should do the trick.  4.97.  That sucks for a dual-threat QB.  I already thought Mel Kiper was huffing gas for projecting the Bucs to take Freeman at 19.  Hopefully his pedestrian 40 time will help keep that from becoming a reality.