A Chat with Brandon from Acme Packing Company;

Share All sharing options for: A Chat with Brandon from Acme Packing Company;

Today we have a nice little talk with Brandon, who is the lead blogger over at SB Nation's Green Bay blog the Acme Packing company, definitly a cool name for a blog. I was pleased to see that Brandon has been a long time Packer follower going back to 1980, so he really has an affinity for all things Green and Gold in the land of Wisconsin. So lets get down to it....

Brandon: I'm still stinging from watching Favre look estatic as he stuck it to his old team last week. I get a few "FAVREISTHEGREATEST!!!" comments, but most Packer fans seemed to have moved on or consider him a traitor. There are always some comments for Thompson and McCarthy's heads, but I generally ignore them. Neither man is perfect, but Thompson has built a talented and deep (and youngest team in the NFL for the 3rd year in a row) almost entirely through the draft. The only outside free agent brought in during his 5 years running the team, that's he's paid over $10 million for, has been CB Charles Woodson, and he's the defensive MVP. There haven't been any big contract disputes, and he's kept the young free agents (like QB Aaron Rodgers) that he should resign. McCarthy isn't the next Bill Walsh, but he knows how to run an effective offense and manage the team. They both mishandled the Favre retirement flip-flop of 2008 (not to be confused with other years), but that was certainly a unique situation so I don't dwell on it.

Niko: The Bucs are 0-7. Is this an easy win for the Packers?

Brandon: I'd like to think so, but I haven't watched a Bucs game all season, so I don't know much about your guys. You looked great when the two teams played in week 4 of 2008, but nearly everything has changed for you since then. Since then the Packers have made some changes on defense, mostly for the better, and the offense will look almost identical.

Niko: In the old ‘sombrero' days, 30,000 Packer fans would fill up stands. Were having ticket problems in 2009 too, will we see a sea of green at the game?

Brandon: Packer fans still seem to travel well, and are everywhere. Back in the 80s and 90s, we could count on tickets being available in Tampa, but the Dungy-Gruden era made them harder to come by. I think you'll see pockets of proud Packer fans, but nothing overwhelming.

Niko: The Bucs are going to be wearing Bucco Bruce orange for first time in over a decade. What if any memories are recalled from our team's old rivalry?

Brandon: I became a Packer fan in 1980, right as the McKay era started it's decline into disaster. And as bad as the Bucs got in the late 80s, the Packers were a dismal franchise back then too, until GM Ron Wolf was hired in 1991. (Is this a bad time to mention that the Bucs fired Ron Wolf as their GM in the late 70s and replaced him with McKay's chauffeur?) Seeing those uniforms just remind me of those old Bay of Pigs (thanks Chris Berman) times.

Niko: Brandon, If you had to take a Buccaneer player, who would it be and why? Who would you trade for him?

Brandon: Barrett Rudd is always a good choice, but he really doesn't fill a need. I should mention that I really like the Packers team, they've got a lot of good players up and down the roster, so there aren't a lot of gaping holes. The two problem areas are pass protection, which should be getting better as their veteran offensive tackles, Chad Clifton and Mark Tauscher, should be returning next week, otherwise I'd mention Davin Joseph (could he play tackle?). The other big problem area is the pass rush, but you're probably in search of an elite pass rusher (either OLB or DE) too. 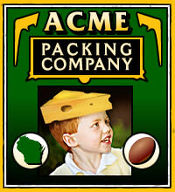