Seems like my whole radio listening world flipped upside down in February.

I used to cringe when I would listen to Steve Duemig on 620 because it seemed like I disagreed with EVERYTHING he had to say. Especially Jon Gruden, whom I supported last year. In the end, I understood the move to fire him, and I agree with it. The next time I call in to his show, I will let the Big Dog know he was right the whole time about him.

I think the  move to Raheem is a good one, and I think in time it will work out. Dan Sileo in the early morning was the voice of reason for me as he had a bunch of pro-Gruden messages that I agreed with. But when Jon was fired, for me, that was it. he was gone, and I moved on.

He has been very anti Morris and anti Dominik and every move they have made; and the Bucs 0-7 record wasnt enough.. he had to jump on a story a friend told him, without so much as doing simple internet research, something radio hosts on WDAE seem to be unable to do besides Justin Pulowski , Derek Sharpe, or Steve Duemig who DO get their work done online and are computer literate.

Speaking of the Big Dog, I am now able to listen to his show, because every since February, everything that comes out of his mouth pretty much mirrors how I feel. Besides, there is just something about his show...its very educational in so many different ways. They guy has been around football for a long time, and he has a long tie to the Buccaneers going back to the Orange days, so he knows what he is talking about.

As for Ron and Ian, I'm pretty neutral with them. I understand they have that big feud with Paul Stewart of whom I'm friends with, and I try to stay neutral in my opinions on that, as I was around for the very beginnings of that hate fest.

My biggest beef with Ron and Ian is the lack of general knowledge the two seem to have. How often have you heard a caller or one of them raise a question about the Bucs, and they are lost as to the basic facts; such as a record, a players stats, game results, etc.  Ian Beckles has no one to blame but himself, he was fired by Jon Gruden while doing Grudens Coaches show in Chucky's first year on the job. Gruden asked for someone who was better prepared. I have heard Beckles criticize a player, then an hour later claim, "I actually didn't watch the game".

In their defense, they are first to say they are not just a sports show, they are a talk radio show that gets into a variety of topics. Ron Diaz has been around this area a long as I can remember, as partner in the famous Ron and Ron radio show on 95 WYNF FM back in the late 70s early 80s. Still, notice the logo above? Sports? Animal?

To me the straw that breaks the back has always been the overall negativity that the entire crew from 6 am to 3pm during training camp; when I am so excited to have Bucs football start again, and Im  just brought down instantly listening to one of the three morning guys spew negativity instead of some optimism. I understand its not their job to be optimistic. But its training camp...if the Bucs do suck, there will be plenty of time to rip them new ones.

Thank You WDAE and 620/ clear channel for taking action when it was deemed appropriate, and holding these guys to a higher standard than they hold themselves up to.

What other station do you listen to?

Please remember we are not attacking people with name calling, name changing, or anything else you wouldnt do if the person was on the other side of the computer monitor, of which they may just be! 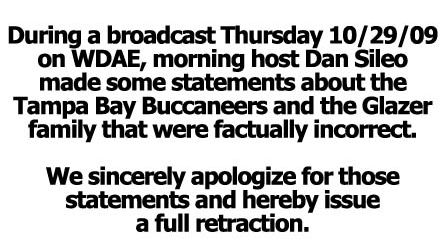