We're about to hit the quarterpole of the regular season, and it's not pretty.  We know the Bucs had a late four game slide last year, and couple with the first three games this year, we haven't seen a real win in our last seven regular season games.  Ugh.  This week, the Bucs go on their second road trip of the year to the nation's capital to face off against the Washington Redskins.  The Redskins are coming off an embarrassing defeat that saw them hand the Lions their first win in 19 games.  Can they hand us our first win in 7 games?  Let's take a look inside at some of the key points.

I generally write this preview mid-week, before I have all of the injury data.  Last week I had Kenny Phillips playing a big part in the game, and he ended up being out for the year.  Just realize that this is written ahead of time.

When Washington has the ball

I don't think Washington is a world beater this year.  That being said, they have the type of team that scares me when faced off against the Bucs.  They have a quarterback with a strong arm who needs time to operate.  They have two receviers who can stretch the field and a tight end who is equally comfortable patrolling the middle or heading downfield.  Their running game has stalled a bit, but Clinton Portis can still move the ball.

Moss and Randle El might give us fits if we don't get pressure on the quarterback.  They both are the small, quick receivers.  They also can throw Devin Thomas or Malcolm Kelly, two big bodied receivers at us.  The issue has been Campbell having time to throw, which against the Bucs, hasn't proven to be an issue.

If the Bucs double Moss or Randle El, that leaves Cooley open.  He's already matched his TD total from last year, and could up it against the Bucs.  He should draw Quincy Black in coverage, and Black will have to position himself well, not rely on athletic talent.

I've watched Campbell for 6 years now, including college.  He's an athletic guy with a big arm, but he needs time to throw.  The best thing the Bucs can do to shut the Redskins down is to pressure him.  Get in his face.  Don't allow him to step up, make him throw on the move.  At some point Bates will have to pick his poison.  Either you sit back, rush 3-4 guys and let them dink and dunk down the field with the hopes you can stop them or you pressure them and trust your secondary to cover.  I don't advocate blitzing every play, but i watched the Giants manhandle Campbell in Week 1 with pressure.  We have to do the same.

Assuming we bring pressure, our safeties will either be asked to be part of the blitz or to single up on a receiving target.  This is a huge responsibility for them, given the lapses we've seen in the past.  I'd be more comfortable if Bates threw a few zone blitzes at them, as long as everyone maintains their assignment.  In fact, Here's a pretty standard zone blitz. (Note: The circles aren't big enough, but they should represent the areas covered by respective players.  There shouldn't be a gap between the Free Safety's zone and the two cornerback's zones.  Blame it on my art skills) 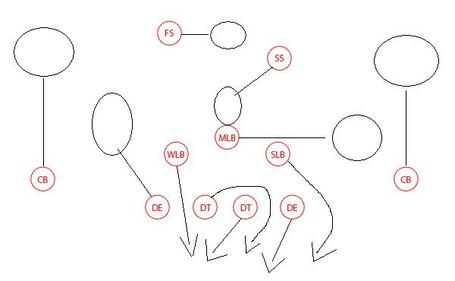 It isn't exactly to scale, but here is what's going on.  The two cornerbacks and the free safety are responsible for the deep thirds and thus, they drop off.  The right end starts pushes on the inside shoulder of the tackle, with the defensive tackles stunting.  The goal is to create confusion with two linebackers coming.  The WLB should end up singled on the left tackle with the SLB hopefully coming free on the outside.  The defensive end (Gaines Adams in my scenario) starts up field and then drops off to cover the underneath route.  The middle linebacker slides out into the short flat vacated by the corner with the strong safety coming down into the middle.

Now, this is just one variation.  The strong safety can attack the flat with the MLB staying put, you can bring corners, drop DT's etc.  The goal is to make the opposing QB think blitz from the LB's but not account for the dropping DE's or DT's, who slide into passing lanes.  With Campbell using Cooley as a dump off, the hopes are that you confuse him to a quick release and it's right into the hands of a sliding Ruud or dropping Hayes/Black.

When Tampa Bay has the ball

Run the ball.  This is key.  The Bucs have to run the ball, run it consistently and run it well to have an opportunity to win.  This is the strength of the team.  They need to get everyone involved.  I'm not a big fan of the rotation, but you have to get each guy on the field and let them do their thing.  Running the ball 10-15 times won't work.  We went through that with Gruden. This is supposed to be a different team, let's see it.  Being down 7-14 points early is not cause to give up.  The line has to provide some lanes for the backs to get through.

With a new and young QB, the focus needs to be on easy throws to get going.  Don't overwhelm him.  Johnson can escape if there's pressure, but he can't be Garcia.  Our line is having enough trouble blocking now, let alone when they don't know where the quarterback will be.  I look for a lot of Winslow and quick passes, slants, to set Johnson up.  The deep ball will be there, but let's not confuse the young man.

On a similar note, I'm somewhat confident that Johnson can run the playbook as is, but the playcalling needs to be tailored to his game.  That means rollouts, sprint outs, passes and plays that utilize his talent.  He can move the ball with his legs, and while we want him to throw first, a timely quarterback draw can be another issue the defense has to worry about.  This isn't immobile Leftwich, let's adapt accordingly.

The Redskins should focus on shutting down the run game.  You take away the legs and force Johnson to go through the air all day, it could be an issue.  If Haynesworth plays (as of this writing, he is assumed to be in the game), he can cause all kinds of havoc being matched up over top of Mahan.  This could be an issue all day, and it's a matchup I expect the Redskins to exploit.

A young quarterback usually favors the dump off and the tight end.  With Bryant hurting, Clayton not demanding attention, and the running backs staying in to block, if I'm the Redskins, I'm taking away Winslow and Stevens.  Make the young quarterback throw downfield, through outside.  Don't let him use his security blankets.  If the Redskins can get pressure with just a 4 man rush (something Buffalo and New York did), this will allow them to drop 7 into coverage and limit Johnson's reads.

Albert Haynesworthagainst Offensive Line - Mahan will be matched up with Haynesworth and will need help.  If Fat Albert is healthy, he will look to collapse the pocket and cause chaos from the center of the line.  This could cause more plays to bounce outside and it might not be a bad idea to move JJ off a spot.  As with any game, the trench battle is key.

Black vs Cooley - Campbell's favorite target will draw Black in coverage on most plays.  Black showed decent coverage skills last week, but will have to be on his game to take out the security blanket

Redskins WR vs Bucs secondary - The deep ball has been our nemesis this year and when Campbell has time, Moss and Randle El can get down field.  The Bucs will have to be disciplined in their coverage and finish plays.  No free-lancing.

The biggest thing to watch is how Josh Johnson handles his first start in the early going.  Instant pressure or a few bad throws could make this a long day.  He needs to get the team moving right away as we have a tendency to fall behind early.

UNFNole did a good analysis of the Bucs and how they performed against the Giants.  He pointed to our average 3rd down as 3rd and 7.1 yards to go.  To combat that figure, the Bucs will have to make sure they are moving forward on first down.  Runs for no gain, incomplete passes, sacks, penalties; these things can not be part of the first down game plan.

I'm gonna keep harping on this point until something changes.  We have to get pressure.  We watched pressure decimate us last week while Manning had all day to sit and throw.  We need to flip the picture on this one.  Pressure Campbell, make him move around, punish him.  In turn we need to protect Johnson, allow him time to make his reads.

Josh Johnson - For reasons we all know.  First start, on the road.  Bring us a win.

Antwaan Randle El & Santana Moss - Pick one.  Both are small, fast receivers.  We can't allow them to get deep on us.  When they catch it, hit them hard.

Sean Mahan - The whipping boy on the offensive line.  He must make the right reads at the line and then give Johnson time.  The center has to do it all and right now he isn't doing much.

Washington is playing for their season and their head coach.  Both are about to be lost.  The Bucs are playing for their new quarterback and some pride. Both teams have been ridiculed and put through the public ringer.  Washington lost to Detroit and returns home.  Another loss and they are sitting 3-4 games behind the NFC East leaders.  The Bucs need a win. The schedule doesn't have a must win.  I think Johnson and the offense come up and can put up some points and I'm hoping that Bates and the defense can just hold on.  I could go either way on this, but I'm taking the Bucs, for maybe the last time this year.  Bucs 17  - Redskins 16